Celebrate the mid-autumn festival with mooncakes of your own creations and enjoy them with your family and friends.

Combine all oil dough ingredients and work the fats into the flour. Knead until you get a smooth dough. Cover with cling film and chill in the refrigerator for 30 minutes.

Combine all water dough ingredients and knead into a smooth dough. Add a tinge of red food colouring to dough skin. Put aside to rest for 15 minutes.

Divide oil and water dough into 50g portions. Wrap water dough in the oil dough and roll out with a rolling pin into a long strip. Roll the strip like a cylinder and put aside to rest for 3 hours.

Trim the ends neatly and slice the dough into two. Press down gently to flatten the dough then roll out wide enough to wrap around the filling.

Trim away any excess and shape into a smooth ball.

Brush with a little egg white and sprinkle with some black sesame seeds.

Arrange the prepared pastry on a lightly greased tray. Bake in a preheated oven at 200°C for 15 minutes.

Turn down the temperature to 180°C and continue to bake for a further 15-20 minutes or till done.

Place durian flesh in a nonstick saucepan. Fry over low heat till dry. Add salt and continue to cook until the mixture is thick.

Combine the koh fun, wheat starch and santan powder, and sprinkle the mixture over the cooked durian. Stir till a thick durian paste is achieved.

Turn off the heat and mix in a drizzle of oil. Dish out and leave to cool completely.

Scale durian lotus paste according to the size of your mooncake mould. Wrap each portion of lotus paste with a small portion of durian flesh filling.

A tinge of lemon food colouring

Rub lightly until mixture resembles breadcrumbs. Pour in cold water gradually and add essence, if using. Mix into a soft and pliable dough.

Note: The amount of water to add depends on the flour consistency. It may take all the given amount or may be less.

Scale the dough into 90g pieces (depending on the size of the mould). Wrap the dough skin around the filling and seal the end neatly. Place into mould and press lightly. Knock the mould to dislodge the ping pei mooncake and chill in the refrigerator until ready to serve.

Combine golden syrup, alkaline water, bicarbonate of soda and oil in a mixing bowl. Mix well and set aside to rest for 1-2 hours.

Sift flour and green tea powder together. Add to the syrup mixture. Knead into a soft dough. Cover with cling film and leave to rest for 1 hour. Scale the dough according to the size of your mould.

Press into a flour-dusted mooncake mould. Knock to dislodge the mooncake onto a greased baking tray.

Bake in preheated 180°C oven for 10 minutes. Remove and allow to cool for 15 minutes then brush with glaze and return to the oven to bake for a further 10 minutes.

Allow to cool and mature well before serving. 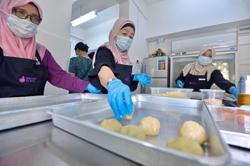