Martell replaces its 58-year-old VSOP with the Red Barrels

It isn’t often that a major spirits brand replaces one of its flagship products, let alone one that has been around for more than half a century.

That is exactly what Martell is doing with its VSOP expression (VSOP stands for Very Special Old Pale, which are cognacs aged at least five years). The current one, Martell VSOP Medallion, will soon be phased out and replaced by the new Martell MVSOP Aged In Red Barrels.

Martell Cellar Master Christophe Valtaud was in town recently to launch the new expression in Malaysia, which is one of the first countries to get the “Red Barrel”.

For Valtaud, the inspiration for the new VSOP came from the idea of taking the VSOP closer to the core Martell style, and creating a worthy successor to the Medallion, which was created in 1960.

“When I first took over, I tasted the entire range and felt that this was too different (from the Martell stlye). We’ve kept the same taste for 58 years, and I wanted to see if I can take the VSOP further,” he said.

According to Martell Heritage Director Jacques Menier, it was a necessary change. “It’s not a major change, it’s still the Martell style, but it’s an important change because it smoothens the taste of the VSOP,” he said. “This is a product that is more open to more people. We have more and more younger adult consumers, so we needed a cognac that is easier to drink.”

The Martell VSOP Aged In Red Barrels is set to replace the current VSOP worldwide. Photo: The Star/Michael Cheang

So, what exactly are these “red barrels” then? Known as “futs roux”, or red barrels because of the reddish tinge of their wood, these are barrels that are in a specific stage of maturing eau de vie (between four to eight years), and have reached the perfect stage of maturation for both the oak and the eaux-de-vie, thus allowing for an ideally balanced exchange between the two.

“The big difference is, in the Medallion, you have the spicy notes from the new barrels, and there is some bitterness and astringency. But you don’t get that with Red Barrel. It is more in line with the fruity Martell style.”

During the launch at Copper Mansion in Petaling Jaya, Selangor, I was lucky enough to taste both the Red Barrel and Medallion side by side, and I was quite surprised to see just how different they are.

The Medallion has a heavier, more savoury note on the nose, and also much spicier note on the palate. The Red Barrel, however, has a light delicate fruitiness with lots of candied fruit and apricots, and would be a lot more accessible and easy drinking compared to the Medallion.

While the spicy notes of the Medallion VSOP reminded me of Martell’s XO expression, the Red Barrels VSOP seems a lot closer to the cognac house’s flagship Cordon Bleu expression.

Valtaud explained that one of the objectives for Red Barrels was indeed to get the VSOP closer to the Cordon Bleu in terms of the flavour profile.

“When you taste the Cordon Bleu, it has a complicated Martell style with fruity and dense flavours. It has the perfect balance between the woody and the fruity notes. Normally the spicy notes (in the Medallion) are not part of our usual footprint. We want the balance and more fruity notes so it is closer to the Cordon Bleu.”

“The previous VSOP was not really in line with the success story that is Cordon Bleu,” Menier added. “It’s all about sophistication – what food you eat, and what you drink with it.

“This new VSOP also matches very well with all types of food, Western Asian, spicy or non-spicy... it has the perfect balance for pairing with food.”

Ultimately, the new VSOP is also about moving the brand forward while still paying tribute to the past, Valtaud said.

“We need to produce something new for our consumers, while still keeping to our legacy. I wanted to keep the best of what my predecessors had created, and add my own touch while still keeping with the Martell style. The only thing we can’t change is the Cordon Bleu, because it is perfect!” he concluded with a laugh.

Michael Cheang was relieved to see that the Red Barrel didn’t turn his tongue red. Drop him a note at the Tipsy-Turvy Facebook page or follow him on Instagram.

Martell replaces its 58-year-old VSOP with the Red Barrels 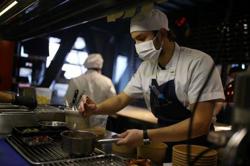 For Colombia's quarantined poor, lunch is served - by trendy restaurants 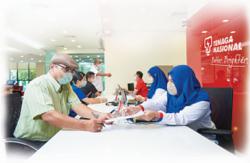