Khachapuri may be the best cheese pizza you’ve ever tasted

I remember my first Adjaruli khachapuri well. We were sitting at a table under the trees in a modest café by the side of a small park near the Dry Bridge in Tbilisi. There were four or five types of khachapuri on the menu but we went for the Adjaruli, Georgia’s most acclaimed cheese bread, described by Forbes.com last year as “the best cheese pizza you’ve ever tasted”.

The boat-shaped bread came to the table freshly baked and brimming with molten cheese, almost-raw egg and thick slices of butter. Stirring egg and butter into the pool of hot cheese turned it into a creamy, oozy fondue. We broke off pieces of the golden crust and dipped them into the cheese. And suddenly, you felt like a kid again, happily dunking cookies into chocolate milk.

Whether it was the long walk or late lunch, the Adjaruli perfectly capped an inspired day of sightseeing in an unexpectedly beautiful city still awakening from almost 70 years of Soviet rule and social and cultural suppression.

When you crumble it down, Adjaruli khachapuri is simple fare. There’s nothing in its basic ingredients of flour, water, crude cheese, egg and knob of butter to suggest that it’s an awesome dish – even if you use milk in place of water to make the crust as some cooks do. It’s one of those things where the sum of its parts and the expression of eating it, lift it to higher levels.

Khachapuri is everywhere in Georgia, a country of cheese and wine, and considered the national dish.

From the name, “khacha” means cheese curds, and “puri” is the general term for bread in Georgia. Most locals can name four to five different styles of khachapuri, which varies by region; we found at least 10 variations.

A mixture of grated cheese and spinach is one way to fill a khachapuri.

Adjaruli khachapuri is from the Adjara region in the south-west, bordering Turkey and the Black Sea. The boat-shaped bread is symbolic of the coastal region, the egg a reminder of the beautiful sunsets over the sea.

Most other khachapuris are derived from Imeruli khachapuri, the bread from the central Imereti region. This pita- or naan-like flatbread is filled with Imeruli cheese, a brined white curd cheese similar to Greek feta. Aged Imeruli has a crumbly texture and sour hint like feta. This is the most common variant in Georgia, being highly portable and capable of being a hand-held meal by itself, finding its way into picnic baskets and lunch boxes.

Khachapuri Tarkhunit is Imeruli with fresh herbs; in one of our many trips to Georgia, we tried a version with tarragon at Barbarestan, a restaurant on Agmashenebeli Street in Tbilisi serving food from Georgia’s first cookbook written in the 19th century. The version stuffed with potato and cheese comes from Ossetia (Osuri khachapuri), and is also known as Khabizgini.

Georgia is a country of cheese and wine.

Not all khachapuris are round or boat-shaped. Achma, from Abkhazia, is layered and looks more like crispy-top cheese lasagna. Guruli khachapuri from Guria is a crescent-shaped – looks like a calzone – Christmas pie with boiled egg and cheese inside. There’s also a version on a spit, khachapuri Shampurze, made by skewering sulguni and winding the bread dough around it to resemble a huge sausage.

And not all khachapuris are made with bread dough. Tbilisi has Penovani khachapuri made with puff pastry, resulting in a flaky pie.

Paradoxically, there are khachapuris without cheese. Kubdari, from the Svaneti region and hence also referred to as Svanetian khachapuri, is stuffed with spiced minced beef, goat, pork or lamb. Lobiani is stuffed with beans. The bean and potato versions are said to be introduced by Georgian Jews who eat no dairy.

In Georgia, khachapuris are made with either Imeruli – the most common cheese – or Sulguni, or both. Sulguni is a mozzarella-like fresh cheese made of cow’s milk. Outside Georgia, a combination of feta and mozzarella is used.

Megruli khachapuri is from coastal Samegrelo, in Georgia, and comes with a stunning calorie count.

Modern Georgian artisanal cheesemaker Sopo Gorgadze prefers to use ricotta. “I never use processed pizza mozzarella or feta as I find it too salty. Ricotta is better,” she said, although she doesn’t mind fresh mozzarella for topping. “Khachapuri means bread with ricotta.”

Sopo, who gained countrywide renown last year as winner of Georgia’s reality cookshow My Kitchen Rules, shares her dough recipe for khachapuri: “For 1 kg of flour use 150g clarified butter, 1 tablespoon sugar, 1 teaspoon salt and 1 tablespoon dried yeast and as much warm water as you need to make a soft dough.” She hastened to add, “but everyone has their own recipe for khachapuri.”

While an order of khachapuri is substantial enough for a meal, it is never a main dish in Georgia. The khachapuri is considered a side dish, one with a lot of national pride attached to it.

Meanwhile in New York, the Adjaruli khachapuri saga, “written about breathlessly since at least 2011” has reached a turning point and “crossed over into an essential dish”, according to Eater.com. Khachapuri has become an NYC classic, the influential food portal announced. The city is making it its own with American riffs like mac ’n cheese, meatballs and bacon.

For now, if you want a taste of the very Instagrammable cheesy bread in Malaysia, you’ll have to make it yourself.

We share recipes from French chef Jean Michel Fraisse, who went on a World Bank culinary training mission in Georgia and now has Georgia on his mind.

If you want khachapuri in Malaysia, you'll have to make it yourself.

Combine all the ingredients and knead by hand for about 5 minutes to form a smooth dough. Rest, lightly covered with a damp towel, at room temperature for 30 minutes and knead again for 5 minutes. Rest dough covered for another 30 minutes. Punch the dough down, reshape into a ball. Place in an oiled mixing bowl, covered with linen or cling wrap, and keep overnight in the refrigerator.

Remove dough from fridge and allow to come to room temperature, about 20 minutes. Divide into 300g portions and shape into balls. Rest, covered, for 15 to 30 minutes before rolling. Makes about 650g dough.

To prepare filling: In a bowl, combine the cheeses, butter and egg; mix well.

To make and bake: Preheat the oven at 230°C*. Line a baking tray with parchment or silicon mat. Lightly flour the worktop. Roll the dough into a 24cm round and pile the cheese filling in a heap in the middle. Gather the edges of the dough together over the cheese filling and pinch to seal. (The way you would make a dumpling.)

Turn dough over and flatten with the palm of your hand. As you spread out the dough make sure the cheese filling is spread evenly around. Dust top lightly with flour then use a rolling pin to roll it out into a circle.

Pinch the centre to make a small hole – or snip with the tip of a pair of scissors – to allow steam to escape while baking. Roll it once more.

Place khachapuri on lined tray and brush with egg wash. Bake for 15 to 20 minutes, until top is golden brown. Brush generously with butter as soon as you remove from the oven.

*Imeruli khachapuri can also be cooked stovetop on a hot griddle on medium heat. Flip over to cook the other side after one side has browned.

Traditionally, an egg is cracked on the Adjaruli khachapuri, fresh out of the oven. Photo: The Star/Yap Chee Hong

To shape the boat: Roll and shape the dough into a flat boat (rugby ball) shape. Sprinkle some cheese along the edges and roll the edges to cover the cheese and give the dough more of a 3D boat shape. (Note: Filling the edge with cheese is optional.) Fill the boat with the remaining cheese.

To bake: Preheat the oven at 230°C. Place khachapuri on a lined baking tray and bake for 20 to 30 minutes, or until cheese turns golden brown. Remove from the oven. Dig a well in the middle of the cheese and place egg into the well. Pop back into the oven for 2 to 3 minutes. (You can skip this step if you prefer the egg raw.) Remove khachapuri from the oven and top with butter.

To serve: At the table, stir the egg and butter into the hot cheese. Start eating from the edge, pulling off pieces of bread with your hands and dunking it in the molten cheese lava.

Kubdari khachapuri, from the Svaneti region in Georgia and hence also referred to as Svanetian khachapuri, is stuffed with spiced minced meat.

salt and pepper to taste

To prepare filling: Combine all the ingredients, mix well, and keep refrigerated.

To make and bake: Preheat oven at 230°C. Line a baking tray with parchment or silicon mat. Lightly flour the worktop. Divide the dough into 2 equal parts and roll each into a 24cm circle. Pile the meat mixture in a heap in the middle. Gather the edges of the dough over the filling and pinch to seal.

Turn the dough over and flatten with the palm of your hand. Dust top with flour lightly, then use a rolling pin to roll it out into a circle.

Pinch the centre to make a small hole – or snip with the tip of a pair of scissors – to allow steam to escape while baking.

Place khachapuri on lined tray and bake for 15 to 20 minutes or until golden brown. Brush the khachapuri generously with butter as soon as you remove from the oven and serve.

Khachapuri on a spit is made by skewering sulguni and winding the bread dough around it.

KHACHAPURI ON A SPIT

Preheat the oven at 230°C. Cut mozzarella in batons. Skewer batons of cheese on bamboo or metal skewers. Roll the bread dough out thinly and cut into 7cm-wide long strips. Roll the dough strips around the cheese to cover it completely. Twist the ends to secure. Brush evenly with egg wash. Bake for 15 to 20 minutes, or until golden brown. Remove from oven, allow to cool slightly before removing the skewer to serve.

Khachapuri may be the best cheese pizza you’ve ever tasted 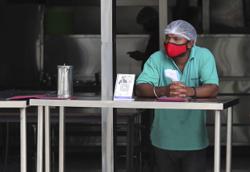