Teng says there is a misconception among shoppers that Jaya Grocer is expensive, as most of its products are imported.

About 15 years ago, going grocery shopping meant going to your neighbourhood supermarket to get all the essentials. Which was fine if all you wanted was vegetables, fruits and local essentials like belacan. But if you were looking for exotic cheese or jam or organic food, chances are you’d come up empty-handed.

But things have changed dramatically over the years. These days, the urban Kuala Lumpur grocery scape is peppered with premium supermarkets, all offering an eclectic range of local and imported produce to satiate the needs of well-travelled, well-heeled Malaysians as well as expatriates hankering after the foods of their homelands.

Local supermarket chain Jaya Grocer is a prime example of a gourmet supermarket that has done well for itself. Established in 2008 by the Teng family (founders of the eponymous Teng Mini Market Centre and Giant supermarket), the supermarket has grown in leaps and bounds, with 22 outlets to its name.

This year, Jaya Grocer celebrates its 10th anniversary, an occasion which will see the opening of five more outlets in locations like Eco Ardence at Setia Alam, Kuala Lumpur Eco City in Bangsar, Empire City Damansara, Kiara 163 at Mont’Kiara and Kuala Lumpur East at Taman Melati. Next year, three more outlets are likely to open, in Puchong and Kota Kemuning as well as a maiden foray into the Penang market.

Jaya Grocer has been in business for 10 years, and now has 22 outlets, with five more planned for this year.

According to Daniel Teng, Jaya Grocer’s operations director and son of founder Teng Yew Huat, the brand’s expansion is in line with trends that they are seeing in the middle-income and high-income belt. “What we see is that there is a surge in demand. Partly it could be due to Internet exposure, but also, a lot of people study abroad, and when they come back, they miss the things from the country they studied in,” he says.

Teng is only 31, but he has worked in Jaya Grocer since he was fresh out of university, or as he likes to put it, “straight from the frying pan into the trolley”. As a result, he is very familiar with the local grocery scene. According to him, consumers now have very different predilections.

Online grocery shopping has also been quite successful for the supermarket chain, which has seen a 30% growth in its online segment since it was introduced at the end of 2016. The brand is also actively looking at expanding its delivery reach to include areas like the Jalan Klang Lama stretch.

Daniel Teng says consumers have different preferences now, and this is reflected in the growth in sales of organic products in Jaya Grocer.

Charting and recognising key consumer needs is something Teng and his family have the experience and expertise to do, which is also why they will soon be introducing the brand-new Bangsar Market by Jaya Grocer in KL Eco City, a concept that was inspired by Melbourne’s historic Victoria Market.

The behemoth 54,000 sq ft space will take up the entire second level of the new mall, and will mimic a regular Malaysian wet market within more salubrious surrounds.

“For the fresh market, where the vegetables and fruits will be sold, we gave local suppliers the chance to run their own stalls. We want the feel to be there, in the sense that you’re dealing with the owner. So it will be like a pasar environment. We hope it works,” he says.

“For the wet market where the meat and seafood will be sold, we will be bringing in more imported produce. We will also offer customers the option of picking their meat, and getting it cooked right then and there!” says Teng.

When the Bangsar Market by Jaya Grocer is introduced in KL Eco City, the seafood section will be expanded to include more imported produce.

Clearly, Jaya Grocer has a lot up its sleeve and plenty to offer in the coming years. But 10 is a special number, and to truly celebrate being in business for a decade, the supermarket chain is offering 10 items on special promotional prices each week, termed the “Ten to Celebrate Ten” campaign.

Additionally, through a partnership with AIA Vitality, AIA card holders get a 10% discount on selected fruits and vegetables in connection with the supermarket’s Healthy Food campaign.

As part of its 10th anniversary celebrations, Jaya Grocer is offering 10 items on special promotional prices each week, termed the Ten to Celebrate Ten campaign.

Although Jaya Grocer has been doing exceedingly well over the year, a common lament that Teng hears is that the supermarket chain is expensive – a misconception that he would like to remedy.

“I think there’s been a misconception, due to the fact that we carry more imported food. So when you look at the shelves, you’ll think it’s expensive because it’s imported. But we do keep our prices competitive, because we really want to source for the best price possible for shoppers,” he says. Americans, it turns out, would rather visit a store than buy food online 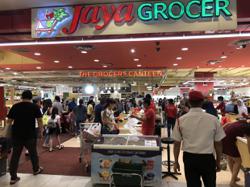 ‘Don’t hoard, there is ample supply of goods’