The newly-launched (and very delicious) Brimmie Sammich is made up of pulled lamb, coleslaw, pickled cucumbers and onions in a soft croissant. - YAP CHEE HONG/The Star

A few years ago, Nazri Jameson was at a loose end. The culinary arts graduate had worked in a couple of restaurants but wasn’t sure what to do next. His brother-in-law suggested he look into pulled meats. Nazri turned to the Internet and quickly became fascinated by what he saw. Soon, he had developed a full-blown obsession with churning out perfectly barbecued briskets.

Brisket is a notoriously tough piece of meat to work with, as it has to be cooked right in order to yield tender, gelatinous meat. Nazri took this task to heart, spending close to five months honing his barbecued brisket and using up nearly 120kg of meat in an attempt to achieve his vision of perfection.

“Those were very dark times. But again, it was an obsession, so I worked and worked on it day and night and tried to perfect it, and it took about five to six months before I could say, ‘Okay, I think we can sell this’,” he says.

So with his brother-in-law and a German friend, they started Beard Brothers’ BBQ, working out of his wife’s grandmother’s house and taking orders from interested customers.

Fast forward four years, and Beard Brothers’ has moved to a proper commercial lot in Tropicana Avenue in Petaling Jaya. Nazri also has new partners (all have beards, in case you’re wondering) in the form of another brother-in-law, Sayf Taufik, and good friend Afif Ter.

Business at Beard Brothers’ has been pretty brisk. On an average day, the guys sell about 95kg to 100kg of meat, and this volume increases to about 130kg over the weekends. Queues are fairly common and often, they sell out by 8pm!

Part of this success can be attributed to the level of dedication Nazri and his team have devoted to getting the barbecued meat to the point that it is at now.

To begin with, he invested in a custom-made 1.2-tonne smoker. His meats are cooked using the smoker and wood – in this case, local rubber and mangrove wood.

“There was a time when we were using hickory and maple wood. And I thought to myself, ‘Malaysia is a land full of trees – why are we not using local wood?’ So we tested out 10 to 12 kinds of wood, and the end result was quite good actually,” he says.

Nazri and his team tend to the meat in the smoker from 8pm to 8am, checking it constantly to make sure the temperature is right.

Then there is the labour involved in cooking the meat (sourced from Australia) and it takes a whopping 20 hours from start to finish. The meat has to be first thawed, then trimmed. Then a dry rub made up of a secret concoction of spices is massaged into the meat and left for three to four hours.

The meat goes into the smoker at 8pm, which is when Nazri’s graveyard shift team comes in. (Nazri is so particular about the quality of the meat that he stays overnight too!) From then on, it’s all about tending to the meat – checking it constantly to ensure the temperature is right.

At 8am the next morning, the meat is taken out of the smoker and left to rest for a good three to four hours before the eatery opens at noon.

“When people start streaming in, all we have to do is cut the meat – so it looks simple, but there’s hours and hours of work behind it. People still don’t know that. They think it’s just slapping meat on a barbecue,” says Nazri.

The pulled lamb is juicy and tender. With the set meal, you can get a couple of side dishes to boot.

To begin your carnivorous adventure at Beard Brothers’, you’ll have to first decide how much meat you want to eat. The three meat options on the table are all sold in 100g portions – pulled lamb (RM22 per 100g), beef brisket (RM19 per 100g) and beef short ribs (RM24 per 100g for grass-fed and RM30 per 100g for grain-fed).

Nazri recommends 100g portions for singletons and more if there are more than two people eating. The beef short ribs, however, generally weigh in at about 300g per piece, so you’ll probably have to order that much to get a single portion.

You can also get an entire set meal for an extra RM7, which bags you mashed potatoes, coleslaw, baked beans, a potato bun and a drink from local outfit Pop, My Soda.

If you’re feeling particularly ravenous, you can order the Triple Threat Platter (RM125) which encompasses 100g brisket, 100g pulled lamb, a beef short rib as well as four side dishes.

The flavourful grain-fed barbeque beef short ribs are probably the best thing to emerge out of Beard Brothers and melt willingly in the mouth.

The homemade sauce (in red) served on the side goes perfectly with the brisket.

So, does the meat live up to all the hard work that goes into it? It most certainly does! The pulled lamb is a thing of beauty – tender and totally devoid of fibrous, chewy strands. It is also extremely juicy from the house-made apple-heavy sauce that is drizzled over it before serving.

Then there are the beef short ribs (the guys highly recommend the grain-fed variant as it has a higher fat content, so is likely to be juicier). This is probably what you’ll keep coming back to Beard Brothers’ for. The awe-mazing hunk of meat has a delightful fat-meat balance that means you’ll be biting into alternate bits of meat and fat that are just fall-off-the- bone tender.

The house-made sauce served on the side is also really good – tangy and uplifting and great when smeared all over the ribs.

“Although we encourage people to just eat the meat on its own, we’ve realised that Malaysians love their sauce, so I came up with this recipe and people just seem to drink it,” says Nazri.

The beef brisket is as good a version as you’re going to get anywhere. The meat has been completely broken down and is pliant, supple, and moist.

Brisket is however largely unfamiliar territory for most Malaysians, so if you’re open-minded, you’re likely to be a fan, but if you’re newer to the cut, you may not fall in love with it quite as quickly.

From the sides on offer, the mashed potatoes are the clear stand-out, with soft, fluffy potatoes stealing the show in this offering that has lots and lots of butter in it.

The coleslaw is also pretty decent, although not ground-breaking and the baked beans with peaches offer a nice touch of fruitiness to a standard classic.

Beard Brothers’ also recently launched its Brimmie Sammich (RM15) which is made up of a croissant stuffed with pulled lamb, onion, pickled cucumber and coleslaw.

The newly-launched (and very delicious) Brimmie Sammich is made up of pulled lamb, coleslaw, pickled cucumber and onion in a soft croissant.

The croissant is delightfully soft to the touch and the ingredients in it are nothing short of brilliant – juicy lamb, zesty coleslaw, pickled cucumber and onion rounding off this filling, hugely satisfying meal.

Nazri says because business has been booming, they may move to a bigger outlet and invest in another smoker, but his ultimate aim remains the same: he wants his customers to love the food!

“When customers eat here, we want to see that food coma look on their faces. That’s what makes me happy,” he says with a wink.

The eatery looks simple and unassuming, but crowds of people come through the doors every day for the barbecued meats on offer. 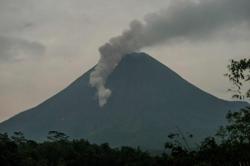