One of the most toxic e-wastes is cathode ray tubes which are found in old televisions and computer monitors; the funnel-shaped glass is contaminated by lead and mercury. One waste recovery facility that can handle this material is Meriahtek in Taman Teknologi Cheng, Malacca.

Executive director Jason Yee says his company has the country’s sole cathode ray tube (CRT) processing line with a laser cutter which can safely recover the glass for reuse. The company is licensed to recycle old electronics and white waste (household electrical appliances such as refrigerators, washing machines and air-conditioners). Retrieving useful materials from e-waste such as these scrap printed circuit boards will prevent them from filling up landfills and releasing toxic substances into the environment. SAMUEL ONG/THE STAR

At the facility, workers can be seen “demanufacturing” all kinds of e-waste – breaking apart things like desktops, CPUs and monitors, and separating the plastic components from the metal ones and others. Much of that gets sold as feedstock for new products. 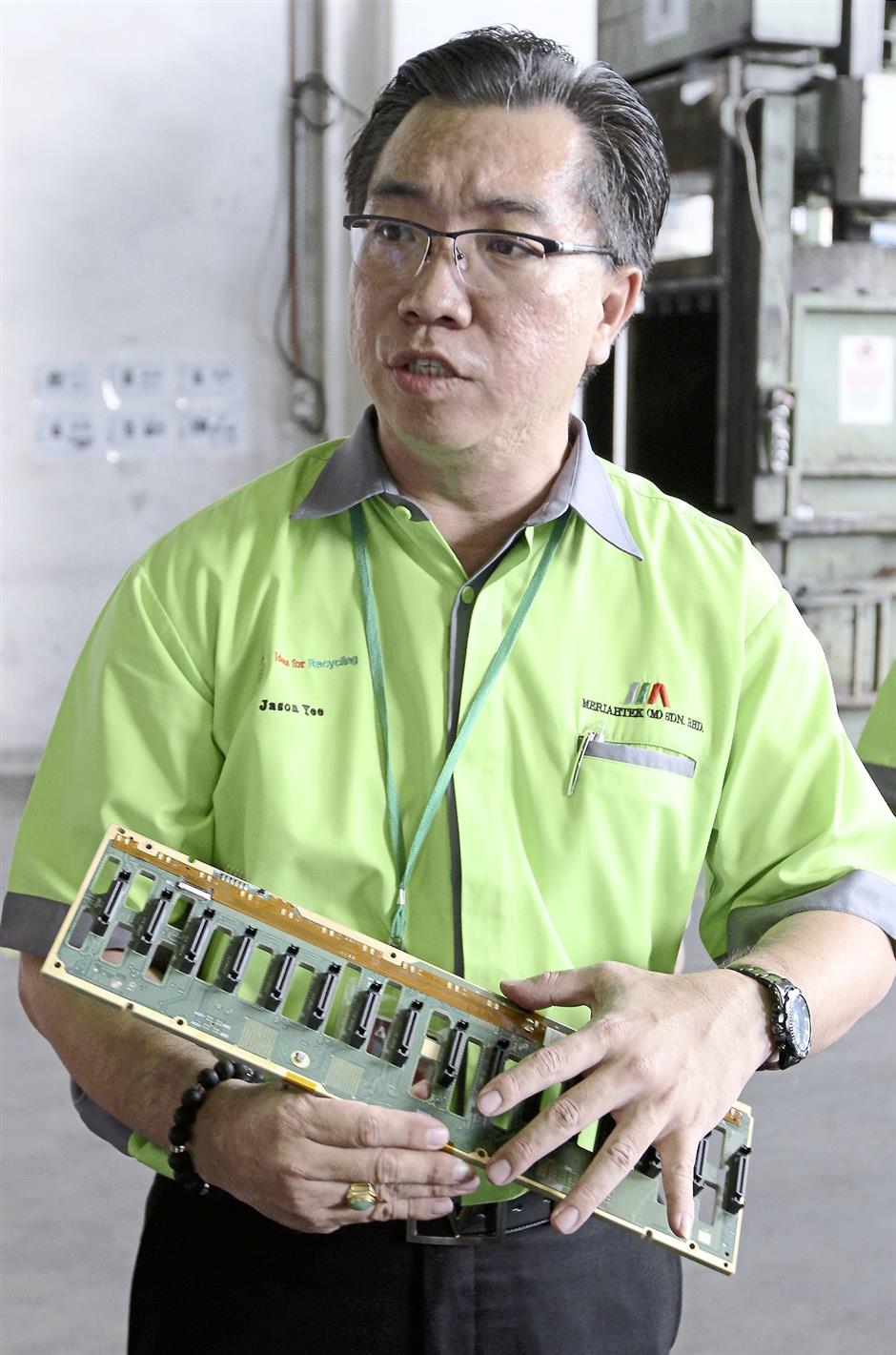 The company pays RM5 for every television or monitor it receives. Not all the monitors are junked; some are refurbished and sent to poor countries. The obsolete ones are dismantled and segregated into some 30 categories. The most harmful part, the CRT, is processed in a contained room. A laser cutter neatly slices it to separate the glass funnel from the front glass panel, exposing the metal parts inside. A suction tube above sucks away any escaping toxic dust, while a hand-held vacuum removes mercury dust on the front panel. The mercury dust goes into bags that are disposed of at the Kualiti Alam landfill for hazardous waste in Port Dickson, Negri Sembilan.

“Most recyclers cut the glass manually which is not a good way to process CRT as all the hazardous substances are released,” says Yee. “Backyard recyclers break the glass, remove the metals, and throw the rest away. TVs have been manufactured in Malaysia for 15 to 20 years. I can’t imagine how many CRTs have been dumped in our landfills.” 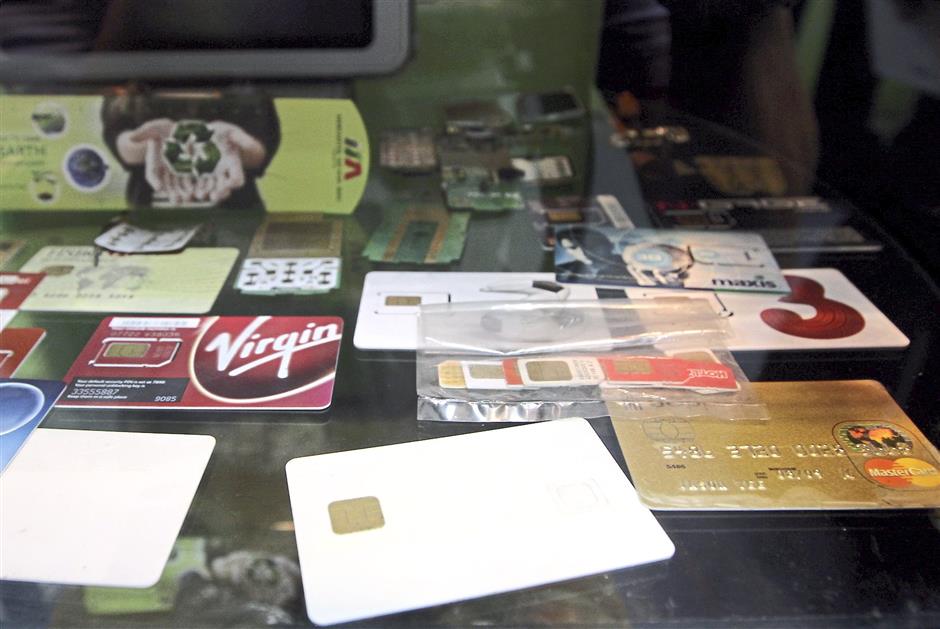 Send your expired plastic cards for recycling; the chip contains gold worth recovering.

The most valuable part of televisions and monitors are the printed circuit boards which contain copper and other metals. The leaded glass has little value. Meriahtek used to sell it to another company (at only 10sen per kg as there were no other buyers!) which recycles it into new CRT. But the advent of flat screen TVs and monitors meant the end of CRT production by this company, so the leaded glass is no longer recycled. Yee says CRT glass now make up 60% of the waste that is sent to Kualiti Alam.

He says the CRT processing line, purchased 10 years ago at a cost of RM500,000, has to date handled 300 tonnes of CRT. “Recycling CRT does not give return of investment. We do it as a CSR project,” shares Yee.

The company’s profits come mainly from the metals derived from e-waste. The full recovery facility can handle 980 tonnes of e-waste a month, retrieving resources like plastics, metals like iron, stainless steel, aluminium and copper as well as precious metals such as gold and silver. “Whatever we cannot recycle or recover is sent to Kualiti Alam for final disposal and we need to pay them,” says Yee.

To illustrate the worth of e-waste, he says a tonne of mobile phones (without batteries) can give 3.5kg of silver and 300g of gold. The amounts vary according to phone types and quality. “Old phones have higher value. Tablets are less valuable as there is not much inside worth recovering. E-waste volumes are increasing but the metal content is less in new devices as manufacturers are saving on materials.”

Meriahtek deals mainly with corporate clients; 85% of its e-waste comes from industries, such as the energy and telecommunications sectors. It provides total waste management – from collection of e-waste to dismantling, sorting, segregation, crushing, recovery, treatment and disposal. “We can’t just say we want waste with metals. It is a competitive industry, so we have to take all.”

This includes toner bottles from printers and non-profitable stuff such as fluorescent lights, which it cannot recycle. It receives large numbers of lights from clients during refurbishment of offices and buildings. All the usable lights are donated to schools and charitable groups. The rest are crushed to reduce the volume for easier disposal at Kualiti Alam. Yee says no recovery is done as there is no market demand for the glass and mercury, plus the lights recycling equipment, which can segregate the various components of the lights, costs RM2mil. The CRT is cut by laser under a suction tube which sucks up toxic dust. Photo: Meriahtek


“We cannot afford that investment. The Government must take the initiative to set up the infrastructure for lights collection and appoint a company to handle the waste,” says Yee.

He points out that in Europe, Singapore, Japan and Taiwan, waste generators pay recyclers to handle the discards properly. “In Malaysia, recyclers have to pay for the waste. When I explain this to foreigners in the industry, they are surprised that our business survives, having to pay for the waste. In Norway, the government pays the recycler according to tonnage of hazardous waste it handles. Such subsidies help recyclers sustain their business. Here, the Government needs to come in and support the industry. It should have a budget to set up recovery facilities for waste with no economic value.”

To raise public awareness and promote proper e-waste recycling, Meriahtek has set up a drive-through collection centre at Aeon supermarket in Bandaraya Melaka. The centre is open daily and accepts all kinds of e-waste. Between August 2014 and January this year, the public dropped off 7,207kg of e-waste. (For more information, call 06-336 5211 or visit www.meriahtek.com.my)

Toxic contamination: Keeping TVs, computers and other electronic waste out of landfills