Living small: A micro-home is where the heart is

The Footprint Delridge development offers three-storey units with 16 sleeping rooms. While some neighbourhoods have fought such projects, likening them to tenements from the early 1900s, people are snapping up these small spaces.

Could you live in less than 200 square feet? More and more people are choosing the affordability and convenience of micro-housing over large living spaces.

THE smell of garlic rises from the frying pan as two women in pyjama pants and slippers sauté shrimp and noodles on a range top in a shared kitchen just inside the main entrance to the apartment building.

As they cook, a steady stream of sneaker-clad tenants, some walking dogs, stride down the hall towards the lift. They barely glance into the kitchen despite the pungent aromas and the conversation taking place around the square, steel table that dominates the room.

The women make fast work of the cooking, then quickly clean up and head back to their apartment to study over steaming bowls of noodles.

“They’re the only ones I’ve seen use the kitchen, but then, I really don’t use the physical space that much,” says Jesse Yem, 21, a psychology major at Seattle University who has lived in this Seattle apartment building for five months. “I come here to sleep, and that’s about it.”

Yem, whose thick black hair hangs over sleepy eyes, occupies one of the 92 micro-units at Alder Flats, a clean, modern, seven-story complex that occupies a city block a few blocks from Seattle U, where old multifamily housing once sat. It’s Yem’s first venture in solo living, and he’s still adjusting to the silence and the cost of living: US$1,000 (RM3,700) for 18sqm, utilities and Wi-Fi included. University student Brian Nguyen (right) reviews a recent tennis practice while roommate Cameron Hathaway catches up on e-mail. They say they get along well in their small space in Alder Flats near campus.

Tiny apartments are hardly a new thing, but they’ve attracted attention and controversy in Seattle because developers have been building them at a quick clip – sometimes over the objections of neighbours – and filling them quickly with people seeking rents that match their circumstances and mobile lifestyles.

The first of the breed, an aPodment development, opened in 2009 with 46 dormlike sleeping rooms with common kitchens.

It was the brainchild of the late developer Jim Potter, who found a loophole in Seattle’s building regulations. At the time, the city allowed up to eight unrelated people to live in one “dwelling” with a shared kitchen. The code didn’t say the rooms had to be tied together as a single unit, so Potter built a cross between an apartment building and a boardinghouse, where someone could rent a sleeping room as small as 9sqm with a private bath and share a kitchen with up to seven others renters.

A micro-housing building spree ensued that gave Seattle more such units than any city in the United States. At last count, 782 micro-housing units were cleared for occupancy in Seattle, with another 1,598 units in the pipeline. No other American city comes close. Carr and Johnson in the commons area of Footprint 1806, their micro-housing development in Seattle.

“I didn’t realise it was going to take off like a rocket,” he says of his first project with Potter.

We’re seated at a conference table in the modest storefront office of Janette Architecture Planning Design, a residential architectural firm. It’s an open space that feels larger than its footprint thanks to floor-to-ceiling windows, and a floor plan that places employees in close quarters, their desks pushed together in groups.

Janette lives in a two-bedroom bungalow with his wife and their three children, so personally and professionally, he’s steeped in the challenges of living small.

Janette designed the initial projects with students in mind. He was surprised when young professionals and even older adults started moving in.

The tenants, he says, “don’t spend a lot of time at home. They go to work, go out and spend time with their friends. They go out to eat, and then go home and do it again. ... And because of the location, they can live in the city, and the city is an extension of how they live and where they live.”

Janette says two factors are critical to micro-housing: light and height. Earlier designs tended to be tall and skinny to accommodate higher ceilings and capture sunlight; more recent designs include atria that bring light inside.

“What the micros have taught me is that there are a lot of people out there who don’t have as much stuff as I do and don’t need that stuff,” Janette says. “I mean, think about how much of your living space just goes to storage. Footprint (a micro-housing developer) has this great tagline: ‘It’s just what you need.’” 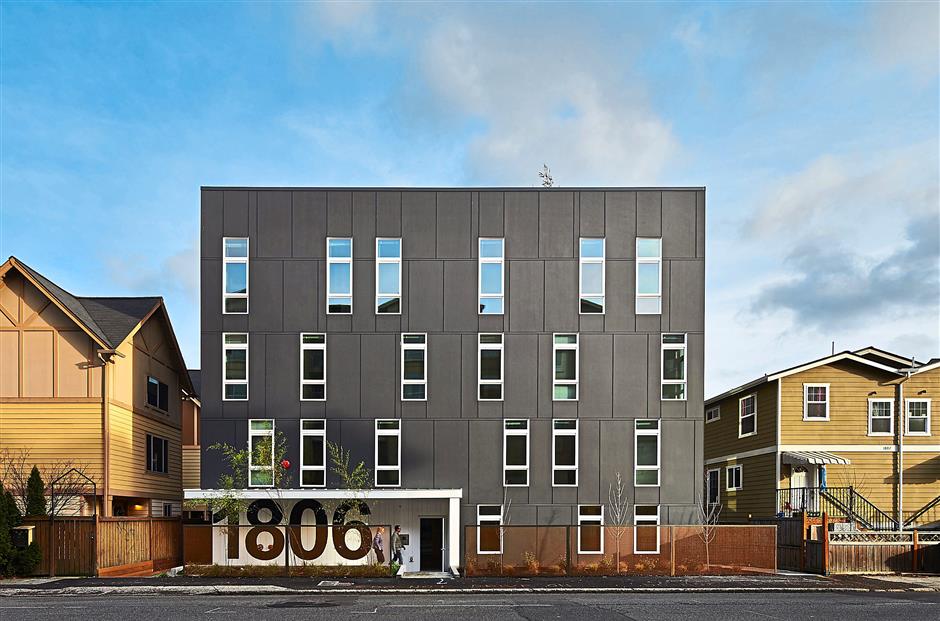 It’s probably no accident then that two of the developers behind six micro-housing projects in Seattle, including Alder Flats, were under 30 when they began building them.

Kelten Johnson, now 33, was taking a certificate course in real estate at the University of Washington when Potter built his first micro-housing project. Johnson and a team of fellow students studied the project, then came up with their own.

Johnson was living in a 56sqm studio. Building small, solo-living units for younger people being priced out of the city seemed like a no-brainer. So when the course ended, Johnson and a secondary school friend, Tyler Carr, now 30, set out to build one.

They approached Potter, who backed their projects before he died of cancer in May last year. Johnson and Carr have teamed with investors to build 400 micro-units renting for US$800 to US$1,000 (RM2,900 to RM3,700) a month, with another 300 efficiency apartments under way that will rent for US$1,000 or more.

The projects tend towards urban neighbourhoods, where there is already multifamily living with access to public transportation, bars, restaurants, and the like.

“People don’t need a 50-inch box to watch TV,” Carr says. “They don’t need a bedstand for their books or a place to keep a catalogue of CDs. Their living room? They have the neighbourhood.” The buildings have common kitchens and rooftop decks with expansive views.

“I think it’s a fundamental lifestyle shift,” says Carr, who grew up in Seattle. “People have different perspectives than our parents might have had. They were geared to acquire as much stuff as you can. They buy a big house and fill it up with as much stuff as they can. It’s a paradigm shift. Our generation is not being geared to the acquisitional mindset. It’s more normal for us being able to shift gears.”

It’s also a steppingstone: Most tenants stay 12 to 14 months, the industry average, he says.

Some neighbourhoods fought the projects – theirs and others – likening them to early 1900 tenements. Judgments abounded: one online magazine referred to them as “hipster hovels”, while others likened their size to prison cells, parking stalls, and carports.

None of it stopped people from moving in.

NEXT: Watch the video of a man who built his tiny apartment. The entrance to Steve Sauer's small apartment (left), and the bathroom. He calls his tiny space an experiment.

Steve Sauer, a Boeing engineer, attracted international attention when Pacific NW magazine featured his 17sqm apartment that includes two sleeping lofts, a full kitchen and a bath, a video-viewing station, and a platform where he could sit by the window and read a book. The room, in the basement of a co-op, had been used for storage.

The article was translated into dozens of languages. He had a movie-star moment at a cafe in Istanbul, where a Russian man overhead him talking about his apartment and said, “I know your place. I love your place!”

Sauer says the apartment, which he started building 12 years ago, is less a lifestyle statement than an experiment that allows him to create something cool and indulge his contrarian ways.

“Conventional housing creeps me out,” he says.

Still, the apartment “is kind of a giant lie” admits Sauer. “I do have this space, and I have the (storage) space next door, which is piled with junk and tools I need.” He also has a nearby condo filled with the detritus that comes with being a bicycling hobbyist and tinkerer.

“That’s a huge struggle in my life, because I really love stuff,” says Sauer, whose job moved to California in December. “I feel that burden all the time, and that’s why I’m relishing this move.”

Still, before his move, he looks wistful as his eyes scan the clean lines of his tiny apartment.

Sauer says he spent only about 100 nights here over the past decade, enough time to realise its limitations: add another person, a child or even a pet, and “very quickly, it falls apart”.

“There’s a very good chance that all this experimentation results in what other people figured out already, which is you need some bedrooms, you need a kitchen, you need a garage, you need a car, you need some storage. It might all come down to this being an absurd thrashing against conformity.”

Sauer has dreams of spreading his design around the world, saying that the ideal prototype would probably be about 23sqm.

“I’m not a small-dwelling advocate per se,” he says, drinking tea at the polished kitchen table. “I’m just an experimenter. People want me to be more single channel. They’d love for me to say I’m just crazed for small dwellings and I wanted everyone to have them, and the world’s got to change. But I’m just trying it out, seeing how it works, trying to stay honest with myself and everybody, and not go hard over on advocating.

“But boy, I sure do want to start working on the next one.”

Erin Shingler is rosy-cheeked as she enters the Alder Flats building, a blue yoga mat cradled in the crook of her arm.

Having just come off three 12-hour overnight shifts at the hospital where she works, she’s catching up on her workouts before kicking back for much-needed rest. Later, the 29-year-old registered nurse might order a meal through BiteSquad.com, the restaurant delivery service, or head to the Thai restaurant down the street.

For now, she’ll take the polished steel lift up to the apartment she’s been renting since she moved in June last year. She makes a mug of tea and surveys her domain.

“I got a job here and needed a place rather quickly,” she says. “This was available and affordable.” Shingler's 18sqm space looks larger than it is thanks to 3m-high ceilings and lots of natural light. The space came with a built-in kitchen hot plate.

With 3m ceilings, a nook for her queen-sized bed, and a north-facing window that provides a view, the space feels larger than its 18sqm. It’s homey, filled with framed vintage photos. The black-and-white decorating scheme complements the white laminate cabinets, the shiny subway tile in the compact kitchen, and the distressed grey laminate flooring.

The apartment came with a desk, so the only furniture Shingler needed was a bed, a dresser, a bookshelf, a flat-screen TV, and a sidearm that doubles as a kitchen table. They are minimally adorned with candles, a handful of knick-knacks, a dozen or so books and family photos.

For now, that’s all she needs.

“I certainly don’t want to live this way forever,” she says, “but at this point in my life, it makes it easier. I need to stay close to work, I need free (street) parking, I need something affordable and just the convenience of being in the city. A space like this allows me to be in the city without breaking the bank.”

Besides, she says, “I know I’m going to be moving soon, so it’s going to be that much easier to move again.” – The Seattle Times/Tribune News Service