Heading to auction for the first time, the legendary 1954 prototype of the Gibson Les Paul Custom guitar is expected to fetch millions.

One deep-pocketed bidder will get a chance to own a piece of rock and roll history when the iconic Les Paul guitar known as "Black Beauty" goes up for auction in New York. The electric instrument, which is the original prototype for the Les Paul Custom guitars made the Gibson Guitar Company, will be sold by Guernsey’s Auctions at the Arader Galleries on Feb 19.

No pre-auction estimate has been put on Black Beauty, but some music experts believe it may well exceed the highest amount ever paid for a guitar at an auction, which currently stands at US$965,000 (RM3.5mil) for the guitar owned and played by Bob Dylan at his first electric performance at the Newport Folk Festival in 1965.

“This instrument,” says Guernsey’s president Arlan Ettinger, “is referred to as the grail, the Holy Grail, because it was the first Les Paul guitar made by Les Paul that gave birth to the thousands and thousands of instruments that bear that name and that resemble this instrument.” Some people, adds Ettinger, have even suggested that the guitar’s peculiar electric sound gave birth to rock and roll. 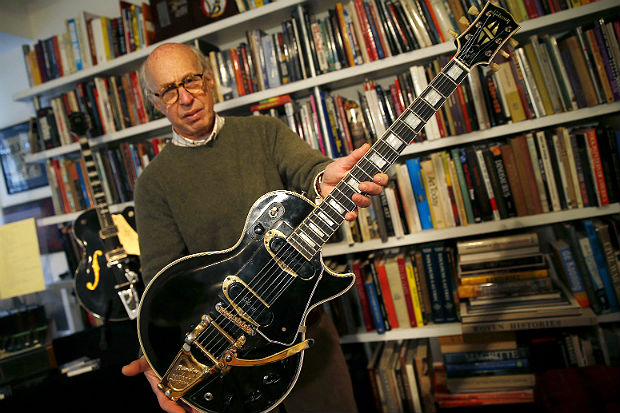 Paul, a pioneering musician and inventor, collaborated with guitar makers Gibson, who approached him in the early 1950s to build a true electric guitar.

The solid body guitar was delivered to him in 1954 and continuously modified as Paul sought to perfect its sound until it was last used in 1976, when he gave it to his close friend Tom Doyle. The black guitar with gold hardware features fine inlays and bindings around the entire instrument.

Ettinger says the instrument originally had different hardware and attachments and the pickguard did not look the same. “But through the next 20 years it evolved as he was experimenting to get new sounds and the maximum excitement of what he created.”

The upgrades, modifications and changes on the Black Beauty set the standard for other Les Paul guitars, which are owned by musicians such as Eric Clapton, Jimmy Page, Neil Young and Jeff Beck.

The February sale will be a litmus test in the auction market for vintage guitars. When a bidder bought Dylan’s 1964 Fender Stratocaster for its record price, it was nearly double its pre-sale estimate and surpassed the US$959,500 paid in 2004 for Eric Clapton’s Fender Stratocaster.