Rare river terrapins get a shot at survival

A shot at survival: The children of Kampung Dusun, near Kuala Berang in Terengganu, releasing year-old river terrapins into the river. The terrapins were hatched at the Kuala Berang Wildlife Conservation Centre from eggs collected from the wild. - KEVIN TAN/The Star

Critically endangered river terrapins are bred and released to replenish their declining numbers in the wild.

On a sunny morning in early September, a huge crowd gathered by the Terengganu River bank in Kampung Dusun, near Kuala Berang in Terengganu.

Word had gotten around about an exciting event – the release of baby river terrapins. It appeared as if the whole village had showed up. When the staff of the Wildlife and National Parks Department (Perhilitan) placed two crates of baby terrapins on the sand, both young and old eagerly closed in to look at and touch the reptiles.

When instructed, the children each grabbed a terrapin and stood in a line. At the count of three, the year-old terrapins were placed on the ground and they instinctively scampered towards the water edge. A few headed the opposite direction and were gently nudged back on track. Eventually, some 100 baby river terrapins made their way to their rightful home.

Hopefully, the experience will stay with the children so that they will grow to care for river terrapins and help preserve the critically endangered species.

The terrapins that were released that day had been hatched and raised at the Kuala Berang Wildlife Conservation Centre in Bukit Paloh, a facility which was opened by Perhilitan in 1976 to safeguard the survival of river terrapins.

To boost the declining population in the wild, eggs are collected from nesting beaches along rivers and reburied for incubation at the centre near Kuala Berang, some 50km from Kuala Terengganu. If left in the nests, the eggs can be attacked by ants or eaten by predators such as monitor lizards. At the centre in Kuala Berang, baby terrapins are raised in shallow ponds on a diet of fish pellets, moss and kangkung shoots.

The incubation period lasts 60 to 70 days. The hatchlings are raised in ponds at the centre for a year before being released so they are better able to survive.

More research in 2009 further split it into subspecies: those in Sumatra and the west coast of Peninsular Malaysia are the western Malay river terrapin Batagur affinis affinis, while those in mainland South-East Asia (including the Peninsular Malaysia east coast) are the eastern Malay river terrapin, Batagur affinis edwardmolli. Once found in huge numbers in most rivers and estuaries, B. affinis now faces an uncertain future. Years of exploitation of its meat and eggs have left it severely depleted. Sand mining, dam building, riverside development, aquaculture as well as river siltation and pollution have damaged its feeding and nesting grounds.

Poaching remains a threat due to spikes in demand for turtle meat in China. (The species is in Appendix I of the Convention on International Trade in Endangered Flora and Fauna, so it cannot be traded.)

The Turtle Conservation Coalition, a global alliance of wildlife groups working on chelonian conservation, has listed the southern river terrapin as among the 25 most critically endangered turtles in the world. It is considered extinct in the wild in Vietnam and Singapore. It is rare in Sumatra and in Thailand, only a relict population remains in one river. It was thought to be extinct in Cambodia until a handful of nesting females was discovered in one river in 2000.

This leaves Malaysia, with its small and scattered terrapin populations in some rivers in Perak, Kedah and Terengganu, as the country with the most viable population of the critically endangered species.

Attention is focused on Terengganu as several of its rivers still have nesting sites – some are the world’s largest – for the species which locals call tuntung sungai. Protecting these sites is crucial to prevent theft of eggs. There are four gazetted nesting river banks in Terengganu: Pasir Temir and Pasir Lubuk Kawah along Terengganu River, and Pasir Kumpal and Pasir Tok Chu along Dungun River. Male river terrapins (left) can be picked out from the females as they develop cream-coloured pupils and darkish heads and carapace when they are about seven years old. - KEVIN TAN/The Star

Sand mining is banned within a 5km radius of a gazetted nesting site, according to Terengganu Perhilitan director Yusoff Shariff. He says the inclusion of the species as “totally protected” in the Wildlife Conservation Act 2010 has boosted its protection.

“Previously, we can only protect nests found within gazetted nesting sites. Under the Act, we can act against anyone in possession of terrapins and their eggs.” The penalties are severe: a fine of up to RM100,000 and/or a jail term of up to three years. Nevertheless, the law has never been invoked.

“Since it has been a tradition to consume the eggs, we put up signs instead to raise awareness on the protected status of the terrapin. In any case, the younger generation no longer eat them,” says Yusoff.

He says the other strategy to promote love for the terrapins is by involving locals in the conservation project. The department hires 15 villagers to collect eggs during the three-month nesting season from February to April, for a fee of RM900 each.

Nesting in the Terengganu and Kemaman rivers appears to be sustained. Between 1,444 and 2,023 eggs were collected annually for incubation from 2008 to 2013. A total of 4,850 baby terrapins were released for that period, with annual figures ranging from 710 to 944.

“The project has been successful. Villagers say the terrapins are nesting in more areas. We have released over 20,000 hatchlings since the opening of the centre,” says Yusoff.

Malaysia’s leading turtle scientist Dr Chan Eng Heng is equally optimistic. She observes that the nesting population of river terrapins in Terengganu River appears to be recovering, with nest numbers rising since 2004. This is an encouraging sign after the mistakes of the past.

In the early 1980s, construction of Kenyir Dam had severely affected the breeding population at the most productive nesting site, Pasir Lubok Kawah. Some 60 females had nested there between 1976 and 1987, but by 1988, only seven were seen. By 1990, egg collection had declined so much that Perhilitan resorted to collecting eggs from other sandbanks and rivers. Dams obstruct migrations between feeding and nesting sites, as well as prevent the accretion of sand that forms nesting beaches.

The population of river terrapins in Kemaman River also appears to be sustained.

“The hatch rates are on the rise,” says Chan who has studied turtles for 30 years. It was only in 2010 that the river was found to harbour nesting river terrapins, following a state-wide survey by the Turtle Conservation Society of Malaysia (TCS), a group founded by Chan.

Acting on the discovery, she initiated a terrapin conservation project in three villages along the river in 2011 – Pasir Gajah, Tok Kapor and Dadong. The three most important nesting banks were declared as nesting reserves by the Kemaman District and Land Office.

Chan gladly notes that the villagers have been enthusiastic about the project.

“They have been very co-operative, and do not sell the eggs. They monitor the nesting sites and collect the eggs for incubation, so we give them an allowance for that. We have trained the villagers in all aspects of conservation work ... from collecting and transporting terrapin eggs to incubating them, and headstarting the baby terrapins prior to release.”

She has seen between 37 and 129 nests each year along Kemaman River. Since 2011, 3,057 eggs have been collected for incubation and over 1,500 baby river terrapins released. While the river terrapin populations in the Terengganu and Kemaman rivers are on the rebound, those in the Setiu and Dungun rivers continue to decline. As for the populations in Besut and Kerteh rivers, little is known.

Chan started a conservation project in Setiu River in 2004 which to date, has released 1,500 baby terrapins. The eggs are bought from villagers for RM5 each. They cost more than marine turtle eggs (RM2.50 each) because of limited availability since each terrapin nest has only about 25 eggs compared with over 100 for marine turtles.

“In Setiu, river terrapins are in bad shape. We find it increasingly difficult to buy eggs for incubation as villagers are not co-operating.”

She blames the decline on deterioration of the riverine habitat due to sand mining and pollution from aquaculture.

Discharges from aquaculture farms can raise river salinity and introduce pathogens, excessive nutrients and drug residues, hence altering the water chemistry. Last year, a shrimp farm at a tributary of Setiu River was instructed by the Department of Environment to build a direct discharge pipe into the sea.

Outside of Terengganu, river terrapins are not faring well. Numbers in Perak and Kedah are still plunging. The species might exist in the other states but no one knows for sure since surveys have not been done. Perhilitan runs two other terrapin centres – in Bota Kanan, Perak (set up in 1967) and in Sungai Pinang, Kedah (1982). Aside from the river terrapin, these centres also breed the painted terrapin (Batagur borneonsis or tuntung laut).

Though Perhilitan has released thousands of hatchlings over the last 40 years through its conservation efforts, few have developed ino nesting adults because of persisting poaching and degradation of the riverine habitat.

In Perak River, declines have been dramatic. The 1,275 nests recorded in 1993 plummeted to 36 in 2009, according to a 2010 report by Chan. She says data provided by Perhilitan shows that it no longer collects eggs from nests found in the wild after 2009 as numbers are too few.

So at the centre in Bota Kanan, only the eggs laid by the captive terrapin population there (which has produced between 35 and 55 nests annually in the last four years) are incubated.

Once numbers are down, it is difficult for the population to rebound due to the species’ late maturity. Chan’s research shows that river terrapins breed only from 22 years old. And unlike marine turtles, they do not lay eggs by the hundreds; each nest averages 25 eggs. Their nesting season is also short, lasting only two to three months.

Chan, however, remains hopeful. “As long as we incubate all the eggs laid, and maximise the production of hatchlings, then there is hope. Hope also lies in maintaining rivers in a pristine state so that river terrapins will have a natural habitat and riverine vegetation for their food.”

TCS is seeking funding support so that it can expand its conservation effort to Kerteh River next year. The river was found to have nesting river terrapins from the 2010 survey, which was funded by the US Fish and Wildlife Service. The group’s terrapin conservation work so far has been possible through funding from the Mohamed bin Zayed Species Conservation Fund, Turtle Conservation Fund and Berjaya Cares Foundation.

To learn more about river terrapins or to adopt one, visit www.turtleconservationsociety.org.my. 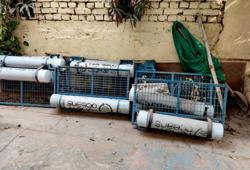