Bear with me: A black bear and her cubs, apparently attracted to the scent of an inactive bear trap, climb around the trap in Yosemite National Park. The park has had a huge problem with bears breaking into cars and causing other mayhem and has embarked on an ambitious campaign to train campers in bear awareness. - MCT photos

The problem of black bears ripping up cars and tents in their search for food has declined following behaviour conditioning for both man and animal.

It wasn’t that long ago that a trip to see Yosemite’s spectacular granite cliffs and splendid waterfalls was a descent into bear mayhem.

In 1997, black bears broke into more than 600 cars in the park, searching for human food as they tore open the doors of Toyotas and Hondas, smashing minivan windows with their paws. The ursine marauders wandered into tents, overturned garbage cans and, on rare occasions, injured tourists.

“You’d drive your car to the park and then it got destroyed because you left a candy bar inside,” said Mike Tollefson, a former Yosemite superintendent.

But today, in one of Yosemite’s most remarkable wildlife success stories, the bears are behaving better.

Reports of bears damaging property or injuring people in the park have fallen 92% – from 1,584 in 1998 to 120 last year. And the number of bears that park officials have had to kill because they pose safety problems has fallen from about 10 a year in the 1990s to one or two a year now.

“The numbers are down, and that’s awesome,” said Ryan Leahy, a Yosemite wildlife biologist and bear expert. “More and more people are doing what they are supposed to do. But it only takes one slip-up to cost a bear’s life. Each person can have a huge impact.”

Yosemite has between 300 and 500 black bears. Thousands more live in the rest of California and other Western states. There has never been a recorded incident of a black bear killing a person in Yosemite, or anywhere in California.

Grizzly bears, their larger and fiercer cousins, do occasionally kill people. But grizzlies, despite being immortalised on California’s state flag, have been gone from the Golden State since the last one was shot in Tulare County in 1922. They are now found in Canada, Alaska, Montana, Idaho and Wyoming. 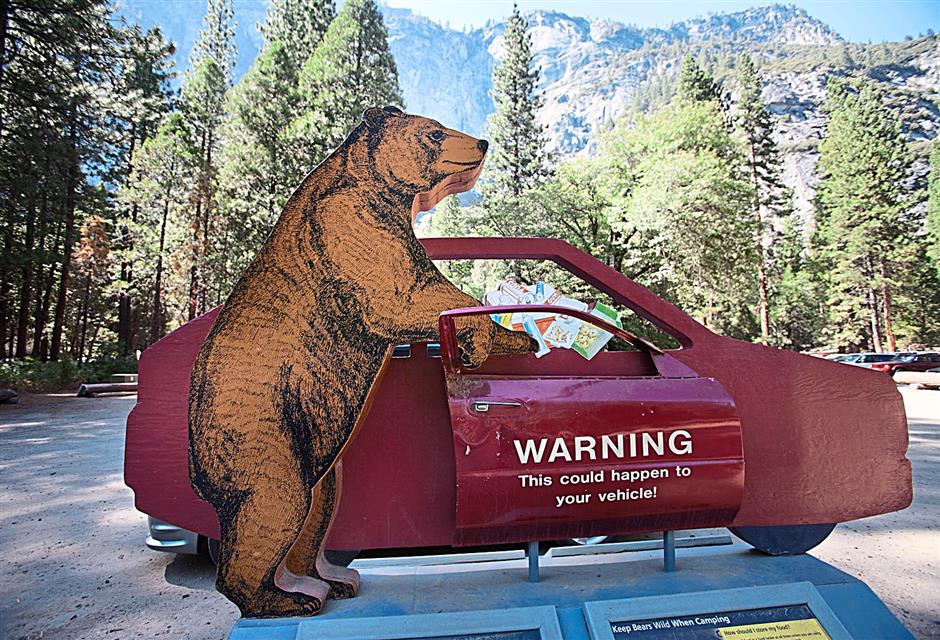 An informational display in a parking lot warns visitors about the risk of leaving food in vehicles.

In Yosemite, the relationship between people and bears has changed dramatically.

From 1923 to 1971, rangers regularly left food out for bears so tourists could take pictures.

Park visitors hand-fed bears until the 1930s and, until 1972, there were open garbage dumps that provided bears massive amounts of easy food – and made them seem more like circus attractions than wild animals.

Black bears became a growing problem in Yosemite during the 1980s and 1990s, when the number of park visitors increased to four million a year.

“Have you ever been in a vehicle or house that a bear has been in it? It’s not pretty,” said Tollefson, now president of the Yosemite Conservancy. “They just don’t poop in the woods. The big ones weigh 400 pounds (180kg). They can run as fast as a horse, and they’re strong.”

The animals made national news for their brazen behaviour, and park officials launched a new campaign that they say helped solve the problem in four ways.

First, they expanded the number of rangers, biologists and volunteers working on bear issues from two to about 20 now.

The park required all campers to store food in steel, bear-proof lockers. Today, there are roughly 4,000 such lockers around Yosemite.

Next, the park launched a massive public education campaign. Campers are now required to sign forms saying they understand it is illegal to feed bears or store food – even toothpaste, deodorant or other scented toiletries – overnight in vehicles.

Third, the park in 2007 required everyone going on overnight backpacking trips in Yosemite’s remote wilderness areas to rent a bear canister, an impenetrable cylinder in which to store food.

“People were hanging food on ropes in trees,” Tollefson said, “but mother bears taught their cubs how to climb up and get it.” 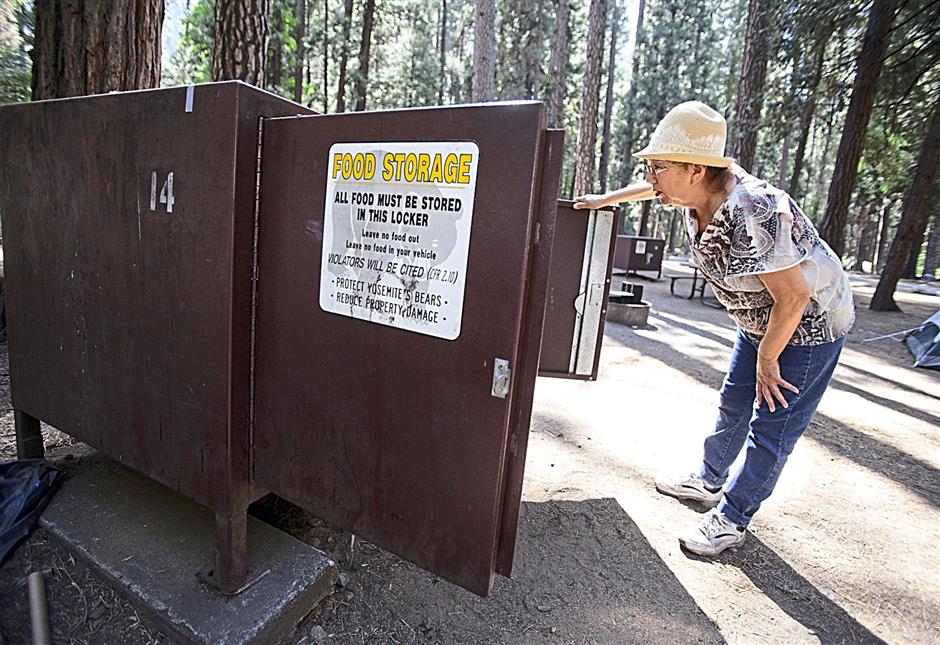 There are 4,000 such bear-proof steel lockers in the park and campers must store all their food in them.

When a bear comes near a campsite, wildlife biologists will chase it, yelling and occasionally shooting a small bean bag or clear ball filled with mineral oil from a paintball gun.

The idea, called “negative conditioning,” is designed to teach bears that coming near humans and trying to eat human food instead of their usual diet of acorns, grass and berries have unpleasant consequences.

“We are trying to teach them that people should be feared,” Leahy said. “We aren’t going to chase a bear foraging in a meadow, but if it’s in a parking lot, we’re going to show the bear, ‘Hey, we need to keep you out of there.’”

The upshot: bears in Yosemite are becoming wild again as older ones accustomed to eating human food die off and younger ones are finding human food harder to get.

A study in March using isotopes to analyse bear fur and bones found a 63% drop in the proportion of human food that black bears are consuming now, compared with the 1970s and 1980s.

“What we found was that the diets of bears changed dramatically after 1999,” said Jack Hopkins, lead author of the study and a research fellow at the University of California, Santa Cruz.

Seven people were injured by bears in 1998, and nobody has been injured in the past two years. Longtime campers say they are noticing a difference.

“Bears that get too habitualised to people lose their fear of people,” said Steve Johnson, a retired civil engineer. “Although a bear has never killed a person in Yosemite, they certainly have the ability if they wanted to. The less interaction between the two, the better for everybody.” — San Jose Mercury News/McClatchy Tribune Information Services