Friendship - Asia, connected through the sea, becoming family and friends. Kim Soo-hyun (in black suit) and Jang Dong-gun (in white) took centrestage on the vessel. - AFP

Incheon reached for the stars as it rolled out the red carpet for Asia’s top athletes.

When two of Asia’s most talented stars – the unlikely pair of a rapper and a classical pianist – teamed up to rock the stage, you knew it wasn’t just any musical performance.

So it was at the 17th Asian Games opening ceremony in South Korea that her famous son, Psy, and China's Lang Lang set the new Incheon Asiad Main Stadium alight with a pulsating number aptly titled Champion.

The stage in question was enormous – all of Asia, if you will, a continent encompassing 4.5 billion inhabitants, more than half of the world’s population. Athletes, hailing from all 45 nations and territories under the Olympic Council of Asia – the most in Asian Games history – joined the party, joyously gyrating to the tune that became a hit for Psy when it was released in 2002 as South Korea co-hosted the FIFA World Cup with Japan.

The duo’s act was the penultimate gig to a three-hour celebration of culture, history, entertainment, and sports, but above all, diversity – and unity – for the world’s second largest multi-sport event after the Summer Olympics. 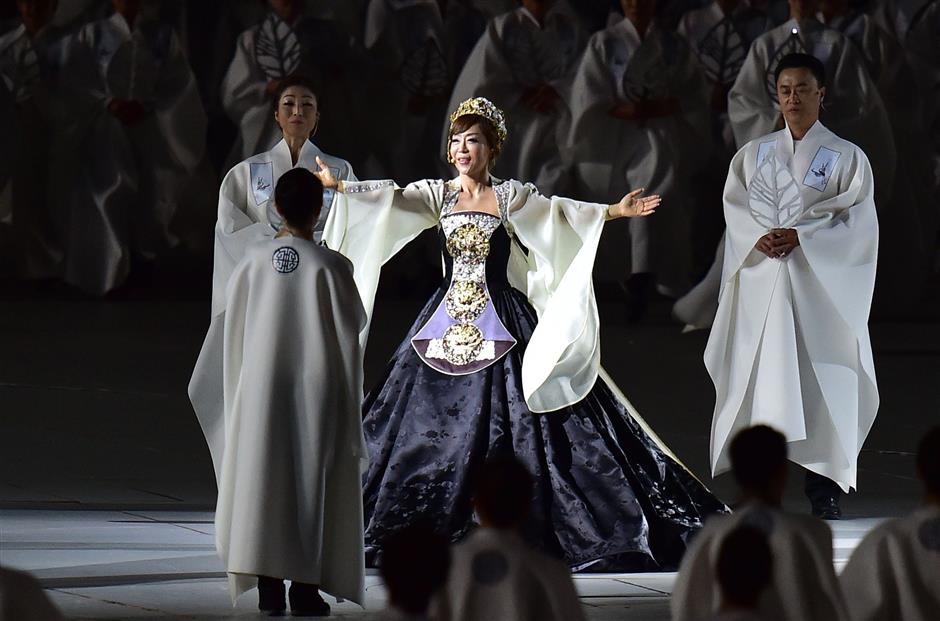 The grande dame of Korean opera, Jo Sumi, in an enthralling performance. – AFP

Earlier, South Korean President Park Geun-hye had declared the opening of the Games to the eruption of fireworks. The ceremony was divided into four musical segments: Old Asia; Asia, connected through sea routes; Becoming family and friends; and One Asia.

The theme “Diversity shines here” was deservedly under the spotlight as the organisers took much effort to emphasise this hallmark of the Asian continent. As it is, the significance is underlined in the glorious Games emblem (wings, formed by the letter “A” for Asia, soaring together towards a bright sun).

Predictably, the opening showpiece, on that balmy Autumn evening recently, ended on a barnstorming note with Psy horsing around with his signature Gangnam Style. It instantly united the multinational athletes on the stage and spectators in the stands as they grooved along to the global smash.

And I was there, amongst the near-capacity crowd of 60,000 in the US$430mil (RM1.4bil) stadium touted for its eco-friendly features and modelled on the motifs of light, wind and dance.

It is one of 17 venues built for the Games in the sprawling metropolis, 27km from the capital Seoul. Literally meaning “wise river”, Incheon is the second biggest port city in South Korea, after Busan, and where one of the world’s busiest airports is located.

Having witnessed many such opening spectacles on my sofa, I was thrilled to get this opportunity to catch the action live, as a media invitee of Incheon 2014’s official timekeeper, Tissot. In addition, it would be my first trip to the country. An irresistible prospect, especially for one who’s been a follower of K-dramas and a little K-pop, and a big fan of bibimbap, bulgogi, and banchan.

I was also among the netizens who had contributed to the staggering two billion views on YouTube that transformed Psy into a poster boy for brand Korea with his monster hit. Never mind that we hardly understand the language, beyond the word sarang (love).

Truth be told, watching the proceedings live with little knowledge of the Korean language, and aided only by the emcee’s brief English narration, I did miss my couch at home. TV audiences probably enjoyed a better view of the performances, and aerial vista of the floor projections when the kaleidoscope of colours, sounds and the history of Incheon and Asian connection came alive before our eyes. Unable to have a more close-up look, we followed most of the action on the large screens around the venue.

Do I sound like I am complaining? I'm not!

For one, it was fantastic to see our own athletes, attired in lovely orange baju kurung and baju Melayu, marching past, led by squash queen Nicol David bearing the Jalur Gemilang.

The one big advantage of a live experience is certainly to feel the atmosphere and be touched by the zest, energy and patriotism shown by flag-waving citizens. Like when the North Korean contingent made its entrance during the march-past, the Southern hosts, whose country is technically still at war with the North, applauded enthusiastically.

It was gratifying, to say the least, to see the China citizens springing to their feet to cheer for their fellow competitors in the Chinese territories of Hong Kong and Macau. It was yet another stunning reflection of life. Where politics fails miserably, sports have the power to unite all, conflicts and differences notwithstanding.

The fact didn't escape Tissot president Francois Thiebaud, who was moved to say: “I was so happy to see people welcoming the North Koreans. On this occasion, nobody fought over political issues. We heard no heckling or booing but applause. There is only a positive fighting spirit among them. I am sure some world records will be broken.”

As the head honcho forecast, a number of world records were shattered in weightlifting, shooting and archery. By the competition’s halfway mark, 17 world records had been stamped – that’s a massive 500% increase over the last Asian Games in Guangzhou.

For a country whose entertainment juggernaut has firmly put it on the map (using a language that's not even widely spoken around the world), it was almost sacrilegious not to line up their Hallyu (Korean Wave) stars alongside their sporting heroes.

And, wow, what a glittering constellation it was for the opening show directed by accomplished filmmakers Im Kwon-taek and Jang Jin! Popular K-pop trio JYJ – the Incheon Games ambassadors delivered the cheery Only One theme song – and an earlier performance by the current hottest group EXO drove the crowd wild. As were the appearances of the veteran actor Jang Dong-gun, looking debonair in an all-white ensemble with a black tie, and the flavour of the moment, Kim Soo-hyun, clad in a stylish black suit. The latter is enjoying stratospheric fame, especially in China, after hitting pay dirt with the 2013 drama, My Love From The Star, playing an alien.

The goosebumps moment, however, belonged to renowned soprano Jo Sumi, whose rousing renditions of The Song Of Asiad and the popular Korean folk song Arirang rang out through the stadium. The meaningful Asiad song was sung to the words by poet Ko Un: “… Race, run … confront each other with all your might, fall and stand up again. Gathered here, with Asia’s long history, new friendship, we begin Asia’s new history.”

The Incheon Games notably bucked the trend by opting instead for an actress, Lee Young-ae, the lead star of the 2003-04 mega-hit Jewel In The Palace, to light the cauldron. Sporting a high ponytail and white T-shirt and shorts, the evergreen 43-year-old did the honour, together with 12-year-old male diver Kim Young-ho and female rhythmic gymnast Kim Joo-won, 13.

Prior to that, the torch had passed through the hands of a string of sports personalities around the stadium, including baseball player Lee Seung-yeop, golfer Park Inbee and speed skater Lee Kyou-hyuk.

So what if the bash was awash with Hallyu heavyweights, the fact remained that this was the gathering of the creme de la creme of Asian sports. In the ensuing 15 days, some 10,000 men and women would battle for 1,108 medals and national honour in 36 sports.

As opening showpieces go, Incheon might not rival Beijing’s magnificent shindig for the 2008 Olympics – in fact, few could since then, in my opinion – but it was, nevertheless, a remarkable opening act with the requisite razzmatazz to make it a high-voltage affair. At a fraction of Beijing’s cost, Incheon should be proud of itself.

Hurdles for the host

In fact, the Incheon Asian Games is already known for “running on a budget”. Its organising committee president Kim Young-soo has said that they had to trim the budget from 545.4 billion won to 482.3 billion won (RM1.7bil to RM1.5bil).

“However, we could not cut expenses that were essential for running the Games. So we decided to slash expenses such as labour costs by reducing the number of employees and volunteers,” he told The Korea Herald on the opening day.

The organisers also had to grapple with the tepid public response to the Games although the situation was expected to improve as the competition progressed.

Hong Kyung-eui, a 59-year-old who had worked with an electronics company in Penang before retiring home to be a tour guide, said he would only follow the Asian Games in a desultory manner.

“I’d probably just catch (star swimmer) Park Tae-hwan in action and a few of the main events. Other than that I am not too excited about the Games,” he said.

He noted that it was nothing new to have big-ticket sporting events on their shores.

For the record, this is the third Asian Games in South Korea. Two previous editions were held in 1986 (Seoul) and 2002 (Busan).

The country had staged even more prestigious events: the 1988 Summer Olympics (in Seoul) and, of course, the 2002 FIFA World Cup.

Incheon native Soo Jin-lee, on the contrary, was brimming with pride to be involved with the Games as a protocol assistant to foreign VIPs.

“I’d wanted to be a volunteer ever since I watched the Guangzhou Asian Games on TV four years ago,” said the 23-year-old university student who was part of 13,500 volunteers at Incheon 2014.

“I am so proud of many of our senior citizens who volunteered their services,” added the young woman.

With youth like Soo, the ambitious city of Incheon – the third most populous in South Korea with 2.9 million people (after Seoul and Busan) – can continue to soar higher, never mind that Asian Games 2014 leaves a huge bill that will take years to repay.

The staging of the Games came five months after the Sewol ferry left Incheon on that fateful April 16, and sank en route to Jeju Island, taking with it some 300 passengers, many of them schoolchildren.

For sure, the sports extravaganza will be no antidote to the deep pain felt by the nation over one of its worst maritime accidents.

But for the moment, Incheon has an important role to play – to welcome its Asian neighbours and embrace all of their diversity, uniting them as one.