The HOW of bike lanes

Building cycling infrastructure can be a cheap, effective way to reduce traffic jams. But they need careful thought and planning.

WHAT kind of bicycle lanes should a Malaysian city build?

In fact, will bike lanes also encourage people to visit some packed shopping malls on weekends since cyclists will be able to bypass the huge traffic jams going into the car parks? Can they actually reduce traffic jams generally by encouraging more people to cycle to work?

One case study are the plans by the Petaling Jaya City Council (MBPJ) to build 56km of bike lanes. Bike lanes can be built in unusual places, such as here in Section 5, PJ.

“The main objective is to join up the parks within PJ,” said Suzana Othman, the town planning officer at MBPJ.

“At first, we thought of encouraging cyclists to commute to work, but then we wondered whether it would work with our hot weather. So we decided to focus on cycling for recreation first.”

However, SK Yeong, who cycles to work everyday pointed out: “The temperature at 7am when we go to work is cool. And when I cycle home after work around 6pm, thousands of people are already out doing their evening exercise.”

Another observer added that students are an excellent target group to use bike lanes as they lack other forms of transport (they are not old enough to drive or ride a motorbike). It would also free up parents from having to incessantly send and fetch their children.

Currently, two pilot projects for cycling lanes have been undertaken by MBPJ – at the suburbs of Damansara Damai and Ara Damansara.

This writer went to check out both places over one weekend evening and saw pretty impressive and extensive pavements designated as “gunasama (dual purpose)” for both cyclists and pedestrians. Some sections were even shaded by trees. When the lanes crossed roads, they were painted blue to alert drivers to the presence of cyclists. 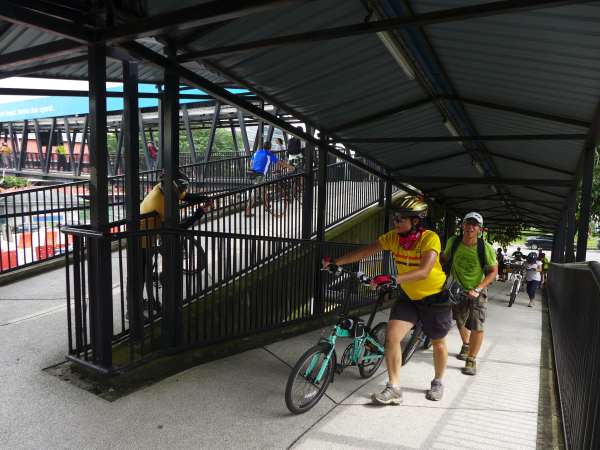 Cyclists can push their bikes up this pedestrian bridge near Damansara Kim, PJ.

The only problem was: hardly any cyclistswere seen using the lanes. At Damansara Damai, several hawkers had even set up stalls on the lanes – suggesting that there was usually little bike traffic on them.

The bike lanes at Ara Damansara connect the housing areas to Tropicana Golf Club, shops, green parks, and the new Tesco, according to Debrizio Wong, who works there.

“So far I’ve only seen a few leisure cyclists in the mornings and evenings, but they were cycling on the road. Sometimes, there are fallen branches and bags of rubbish on the bike lanes,” he noted.

“Some parts are like cycling around land mines because of missing manhole covers,” commented Yeong.

Juan Lyn, who lives near Ara Damansara, added, “Still I think the lanes are a good thing for those who don’t feel safe riding on the road.

They also promote awareness from drivers that there are cyclists around.

“The lanes can encourage non-cyclists to start cycling, maybe to come out to have breakfast or buy some groceries. It has to start somewhere.” The roundabout near KL’s Central Market actually has a special below ground mini roundabout for cyclists -
but it’s half-forgotten and poorly maintained.

She added, “Another good thing is that the Citta Mall nearby was one of the first few malls that provided bicycle parking and people do use them!”

Another issue is: if there’s little traffic congestion within neighbourhoods like Ara Damansara, would the upper-middle class residents there be motivated to cycle to the nearby shops? Or would they prefer to drive 1km to buy a loaf of bread?

Both of these suburbs are also at the fringes of PJ and the bike lanes don’t connect to rest of the city - yet.

The landscape architect Seksan has pointed out that for cycling lanes to be successful and well-used, they need to connect to “mass generators” of traffic such as LRT stations, schools, markets, shopping centres and high density offices.

He explained that a model of cycling which connects only parks, will be purely recreational, and may see too few cyclists using the lanes, hence the danger of them becoming white elephants.

What about the rest of PJ? The bike lanes planned for the Kota Damansara area may be better used by residents to beat the area’s frequent traffic jams.

Bike lanes are also being planned around the MBPJ headquarters in PJ New Town. These may also be more popular as two LRT stations  (Taman Jaya and Asiajaya), Amcorp Mall and some office blocks and condos are in the vicinity.

Covered walkways, better bus services,  park-and-ride facilities plus high-rise SOHOs (small office/home office) are also planned to rejuvenate some of the older neighbourhoods such as Sea Park and Paramount Garden.

“Last mile connections are crucial,” said Yeong. “It’s about how you get to your final destination after you get off the LRT.”

He suggested having bike share or rental schemes – as seen in cities like Paris, Berlin and Hangzhou. People can also use their own foldable bikes after getting off the LRT.

Seksan said that unlike Europe, Malaysia has many more motorcyclists. One option is to design bicycle lanes to double up for motorbikes, thus ensuring that they will be well-used.

“Jogjakarta is a much more chaotic city than KL and it has many ‘jalur alternatif sepeda’ (alternative bike lanes) sign boards to divert bicycles and motorbikes into more quiet and scenic routes,” he explained.

“They don’t have dedicated bicycle lanes. It’s possible that we cannot emulate the Western system fully, it may be too idealistic for us.”

There are many places where bicycle/motorcycle lanes can be built said Seksan, for instance, on reserve land along the MRT line or along drain reserves.

“In some of my own private projects, we are covering up the drains to become bike lanes.”

“The development of bike lanes is just one part of the picture. A crucial aspect is how we develop the crossings at junctions. One solution is to cantilever a simple overhead steel structure for bikes and pedestrians.”

Currently, PJ looks set to use the “gunasama” pavement model (for cyclists and pedestrians rather than for motorbikes and bicycles) and maintenance will be crucial.

However, many cyclists avoid cycling on pavements as there are unpredictable hazards – potholes, loose paver bricks, “cliffhanger” kerbs and so on.

Even the motorcycle lane along the Federal Highway hit the news in May for having dangerous potholes and loose gravel. Several tunnels also had missing lights and got flooded during rains. In addition, some robbers were throwing nails on the lane to rob motorcyclists.

Seksan added, that as the price of petrol is likely to keep going up, we need cheaper and healthier alternatives.

“If we could take 20% of cars off the road, that would help reduce traffic congestion a lot. A traffic-jammed city is not a happy city. Cycling will create a happier community.”

Would you like to write about your adventures? Or want to share some tips on interesting outdoor  activities, safety, equipment or eco-friendly practices? Please write in to our outdoors coordinator, Andrew Sia, at star2@thestar.com.my.