Bullying in the workplace

Bullying goes far beyond the classroom – it gets into the workplace and throughout different stages of life.

IF you think bullying is something that only happens when you’re in school, you’re deluded.

From verbally abusive bosses to sexually inappropriate colleagues, bullying is something that we could have to face up to throughout our working lives.

While workplace bullying might be a grey area at times (is it bullying if someone gets consistently overlooked for promotions or bonuses?), it can rear its ugly head in pretty obvious ways.

Take Jeffrey (not his real name), 27, for instance. Even though he was used to being called names from his time in secondary school, the kind of verbal abuse he used to get from a former employer was too much to take.

“My former boss has problems with his temper,” said Jeffrey. “He would scold us loudly with profanities over minor issues, and most of the time those issues were just blown way out of proportion.”

The boss, Jeffrey said, would yell at the entire office at times; but one of the last straws for Jeffrey was when things got personal.

“He would use my marriage to question my dedication to the job. He would say things like: ‘Because you got married young – that’s why you have no commitment and passion for your work’,” said Jeffrey.

After a about a year, the “toxic environment” became too much for Jeffrey to take and he quit.

The experience didn’t just affect Jeffrey’s professional career. It left a huge dent on his confidence as well.

“It was a motivational downer. I started wondering whether it was worth it working in such a toxic environment, even though it was a good job at a reputable company. It was the worst year of my working life so far,” said Jeffrey.

Are you being bullied?

Though Jeffrey firmly believes what he experienced constitutes workplace bullying, there is a fine line between an office bully and someone with poor inter-personal skills.

So what exactly constitutes workplace bullying? Even Jeffrey came to a point where he started wondering whether his boss’ tongue lashings was “normal” workplace behaviour.

According to the Workplace Bullying Institute (WBI), workplace bullying is defined as the “repeated, health-harming mistreatment of one or more persons by one or more perpetrators”. For HELP International School counselling psychologist Dr Gerard Louis, the keyword in that definition would be “repeated”.

“If it is a one-off act, then it might not be considered bullying,” he said. People do, after all, make one-off mistakes.

Another important thing to remember is that whether an act is considered bullying or not depends largely on the person on the receiving end of it. No harm, no foul, right?

Malaysian Employers Federation executive direction Shamsuddin Bardan said: “Some things can be considered part of working culture. If a recipient doesn’t find it unacceptable, then it is fine. But if an employee feels aggrieved by it, or it is against his or her rights, then it is bullying.”

But workplace bullying can be more than just persistent verbal abuse.

Brand manager Adilah, 28, was sexually harassed by her former boss, who made sexual remarks about her body, asked her to drive him home alone, and even invited her to his place after work.

“These things violated my rights as a Muslim girl, and he used his position to harass me and manipulate me into doing things that are not required of me,” said Adilah, who was also forced to share a room with two male colleagues during a working trip. She left the company soon after.

Malaysian Trade Union Congress general secretary Halim Mansur said that most of the reported workplace bullying cases are not physical in nature.

“It’s not the kind of bullying you (might) see in schools. Nowadays, workplace bullying is when workers are not given proper protection, not enrolled to social security (SOCSO) and Employee Provident Fund (EPF), face sexual harassment and violation of their basic rights as per the Malaysian Employment Act,” said Halim. Victims of workplace bullying could suffer depression, anxiety and other stress-related health problems.

He added that some employees endure workplace bullying because they don’t know their rights. Denying an employee the promotion and/or bonus that they clearly deserve is also considered as bullying on the employer’s part. Halim emphasised that every company should have an induction programme to introduce its rules and regulations, working culture, benefits, and rights for the employees

“If a worker is discriminated against and constantly asked to perform duties that are not according to his or her job specification and ends up being aggravated and intimidated, they should make a report.”

Who do you call

The problem with workplace bullying is that over 70% of the bullies are managers, as was the case with Jeffrey and Adilah.

But that doesn’t mean employees should stay silent when they see it happening, said Louis.

“If you are bullied, you should voice out and get evidence to show that you are bullied. A bully is normally a powerful person, so don’t directly confront them.

According to Halim, if the first step, which is to report the bullying issue to the company’s human resource management (to solve the problem domestically), doesn’t work, then the worker should report it to the Industrial Relations Department.

Two options are given to bullied workers. Employees who would like to end their service with the company can file a constructive dismissal under the Industrial Relations Act 1957, which entitles the employee to terminate the employment contract.

In more serious cases, if an employee finds his or her life threatened and endangered, he or she may file a report for constructive dismissal and compensation for the unfair actions made against the victim.

“Look for people who can help, like trustworthy colleagues or higher authorities if it is your bosses who are bullying you,” said Louis.

He added that it always require the first strike against the bully, or else nothing will change and the bully will go on bullying. “It is normal to feel ashamed if you are sexually harassed or humiliated in public, but nothing is going to change if no one is going to take action.”

According to Louis, bullies often target victims as publicly as possible, which makes workplace bullying all the more embarrassing.

“Bullies likes to perform and demonstrate their power. They often single you (the victim) out, isolate you, and humiliate you with nasty comments.”

Moreover, he added that bullies often try to find a way to disguise what they’re doing, and make it seem like it’s the victim’s fault.

Suresh, 26, for example, was made to seem incompetent even though his boss had been treating him unfairly.

The graphic designer, who has been working in an advertising company for the past five years, believes his boss has been intentionally denying him a proper laptop to work with.

According to Suresh, the company benefits includes a laptop and smartphone for all employees. However, Suresh has been left with an old, malfunctioning laptop and not given a smartphone at all.

“I don’t really care if I get a smartphone. But as a graphic designer, I need a decent computer to work with. The current computer that’s given to me isn’t just old and slow, but the colours are inconsistent. So whenever I produce a print image, it comes out different from what I see on screen. How am I supposed to work this way?” said Suresh, who believes his boss is practising favouritism.

And yet when the colours of Suresh’s designs don’t match what was requested, his boss is the one that turns on him.

“It’s been like this for the past few years, and the only reason I am staying is so that I can continue to build my portfolio for my career in the future. I don’t want to be job hopping,” he said.

>> Bullying is a vicious cycle that starts from our experiences in childhood. Help break that cycle by supporting the R.AGE Against Bullying campaign. Go to RAGEAgainstBullying.com to pledge your support. 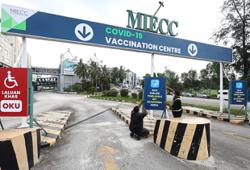