When I was in kindergarten, at age six, I was bullied by two different people, a boy and a girl, both from my class.

The girl, for some reason, did not like me and so, she asked all of her friends, about a third of the class not to befriend me. I remember some of them sympathising with me but they had to “obey” their leader. So, sad to say, I didn't have any friends in that class. I ate alone, sat by myself, and was quite miserable.

The only friend I had in school was a girl from another class. She was my only friend and I thought she was the kindest person in the world. We only met after school as we took the same school bus home. I guess I was considered lucky as all they did was ignore me and left me alone and miserable and wondering what I did wrong to deserve such treatment.

To this day, I still think about it. All I can come up with is perhaps I was a shy and quiet person, an easy target.

The boy was a different story, he just didn't want to be my partner when we lined up. The teachers would get all the children to line up in pairs to walk back to class. He was paired with me but he wanted to be with his friend. He wasn't happy about it and took it out on me, with a punch to my stomach.

Oooof! Oh, the pain. I still remember it.

I never told my mum about the first incident but she found out about this one. I had the measles and did not attend school for two weeks. When it was time to return to school, I didn't want to go and she managed to dig the reason out of me.

My mum's a fighter, unlike me, and she went straight to the class teacher and told her about it. My teacher was a strict but kind person. She called the boy out and questioned him about it. I can't remember what happened but I think he denied it. Anyway, he was no longer my partner and never laid his hand on me again.

Come to think of it, I was both mentally and physically bullied at six. My experience is nothing compared to the many people out there who have been bullied to the point of suicide but it was an episode in my life that I remember to this day.

I keep thinking how I could have fought back, and I believe confidence is the answer. In fact, confidence is the key to success in everything we do. Believing in ourselves, having self-worth and never letting anyone think they are above and beyond us helps. Don't be bullied and don't be a bully. 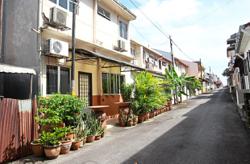