In the fourth of six articles in a series on child safety, we look at the measures schools take to prevent crimes.

Nayati Moodliar was merely a minute away from school when he was snatched by four men. The abduction of the 12-year-old schoolboy quickly went viral on social media, and the public followed the case closely till he was released six days later after a ransom was paid.

Three men had been charged in the magistrate’s court here under the Kidnapping Act 1961. The mastermind is still at large and believed to be in Europe.

Nayati’s kidnapping jolted many parents into being more proactive about their children’s safety in schools. After all, Nayati had always walked to school because he lived only five minutes away, and it was in an affluent neighbourhood.

The crime prompted parents to question who is responsible for their children’s safety in school vicinities.

“We needed to put some preventive measures in place. Together with the other schools in our area, we wrote to the police to voice out our concerns for the safety of the children.

“Because of that initiative, the police assigned two men to patrol our school area three times a day during peak hours,” shares Mohd Kamil, 49, who is the executive chairman of a business consulting group of companies.

That was two years ago, and the policemen had since been reassigned to other cases. 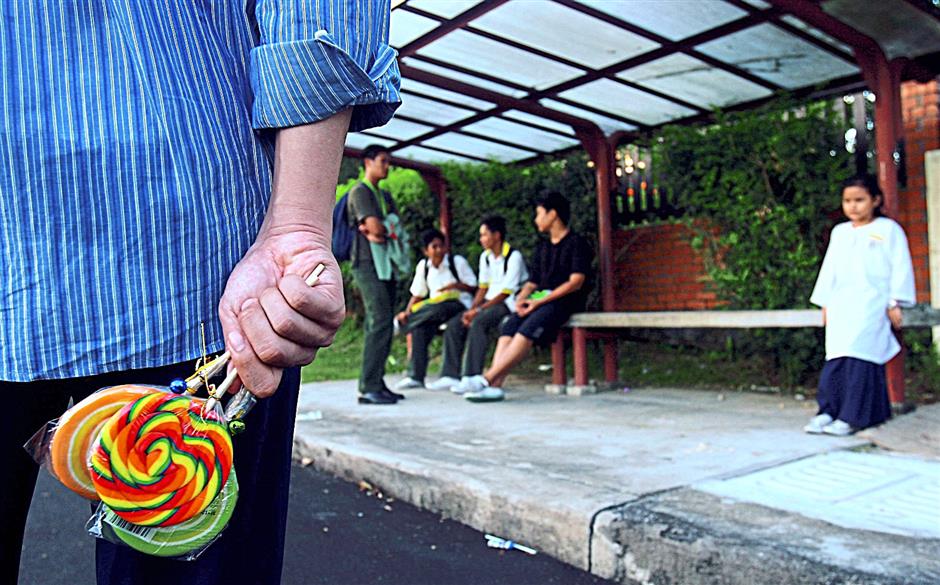 Preying on the innocent: Ensuring the school area is safe for children should be a shared priority between teachers and parents.

In the meantime, Mohd Kamil and his PTA committee have funded installation of CCTVs to monitor the school compound and its surroundings.

“We also have a strict policy when it comes to visitors – even parents can only enter the school by appointment. We have a designated area where parents can wait to pick up their children, but even then, they can’t be there any earlier than 15 minutes before school lets out. We have two security guards to man our gates at all times,” adds Mohd Kamil.

There is also a proposal to give ID cards to St John’s students which will bear their photos, full names, parents’ contact numbers as well as the school’s logo.

“Apart from giving the students a sense of belonging, the ID card can also be useful if something bad happens and there is a need for identification of the student,” explains Mohd Kamil, who believes PTA plays an important role in influencing school policies.

Last year, students and teachers at SK Damansara Utama in Selangor were given a talk on child safety as part of RHB banking group’s Reuniting Families – Child Safety roadshow. Launched in 2011 in partnership with the police and Malaysian Crime Prevention Foundation, the programme aims to educate the public, especially parents and their children, on ways to avoid and prevent crime against them.

“It was a very engaging session. Role-playing was incorporated to help the students better grasp the idea of crime prevention. Safety booklets were handed out.

“Each of our students now has a photo ID kit, which has a record of their particulars. The police told us they have registered our students within their system and if anything untoward were to happen to them, parents only have to bring along the photo ID kit to make a police report,” says SK Damansara Utama senior assistant of student affairs Doris Liew.

New safety railings, funded by the school’s PTA, have also been erected along the pavement leading up to the school, where the students wait for their pick-ups.

“It’s a barrier, something to deter the children from being grabbed and pulled into passing cars,” Liew, 57, explains.

Cellphones, while useful during emergencies, are usually barred from school. Liew’s school allows students to bring their cellphones, but they have to hand over their devices to their teachers who would only return them when school ends.

Liew says it is important for parents to establish a closer relationship with their children’s teachers.

“We don’t get a lot of chances to interact with our students’ parents. We only see them once a year during open day and even then, the discussions are mostly about academic results. It would be great if parents can take the time to familiarise themselves with the teachers so they know who to contact when the need arises.”

While some schools have taken measures to improve their child safety policies, there are still those who view the issue lightly, says homemaker Nik Yasmin Dianara Kamil, 50, the founder and president of the Child Safety Awareness (CSA) group on Facebook.

Going by the tagline “A moment of neglect, a lifetime of regret”, CSA was formed in 2012 out of a concern for the safety of children, prompted by Nayati’s case.

Consisting of mostly parents, the group operates via social media, sharing news and safety reminders on the topic. CSA has since conducted a child safety talk at SK La Salle in Selangor; the group is currently looking at organising a child safety roadshow in the near future.

“Recently, I was visiting a relative in Malacca, and I went along to pick up my nephew from school. What I saw there was really disturbing. Cars that were passing the area made no move to slow down even though there were two zebra crossings in front of the school.

“There were so many near-misses for the children crossing the road. The school security guard and also a Rela officer were on duty that day, but both took no notice of the kids,” the mother-of-six recalls.

Nik Yasmin stresses that it is important for school authorities to ensure the guards they hire are carrying out their duties, too.

Two of Nik Yasmin’s youngest childrenstudy in a private school in Selangor, which she says has put strict safety measures in place.

“The children are all asked to wait for their pick-up within the school compound. No cars are allowed to enter unless they have a special car sticker,” she shares.

According to CSA’s vice president Mohamed Ikhwan Chen, 50, while schools have a role to play in ensuring the safety of its students, they cannot be given the sole responsibility of preventing crime against the children.

“The safety of our children is a shared responsibility. Parents must take that first step to watch over their own children and educate them about the dangers that lurk outside of the home and work with the schools to create a safer environment for them,” says the father-of-two, who is the head of special projects and trading in a private merchant banking investment network.

“The reality is that we can’t prevent crimes like abductions 100%. What we can do though, is to put in place a safety policy to help minimise these crimes.

“At the end of the day, it’s all about enforcement and following through with our ideas. We must be more proactive rather than reactive – we shouldn’t be waiting for something bad to happen before someone does something about it,” says Chen.

> This Child Safety Awareness campaign is brought to you by RHB Banking Group in collaboration with The Star.