Creating happy memories with the kids

Lee Shen-Li with Gareth and his grandfather at the Ostrich Farm.

Shanti Jacqueline remembers huge family Christmases, birthday celebrations, holidays with the extended family and getting together with her cousins. When she had her son, Carl, now 14, she wanted to replicate some of those experiences for him.

“My memories make me keep doing things because I know they make me happy, and others too, and they allow me to realise that life can be fun despite the daily stress. That’s what I want ultimately for Carl,” says the busy working mum.

According to Krystine Batcho in an article entitled “Childhood Happiness: More Than Just Child’s Play” in the magazine Psychology Today, “... research suggests that the impression of having had a happy childhood is associated with greater social connectedness, enhanced sense of self and healthy behaviours.

“Adverse impressions of childhood are related to greater difficulty in relationships, self-insight and dealing with distress.”

If who we are today is a product of what we experienced, then the importance of great memories cannot be denied, especially in childhood. Some parents, like Shanti, take time to create these experiences for their children.

On one of their holidays, Shanti took Carl to the Gold Coast in Australia with her cousin and two children. Until today, all three kids say that trip two years ago was their best holiday ever.

“During the trip, they were content to just muck about with each other in the lounge of our apartment. Simple stuff really,” shares Shanti, who says it made her understand just how important time together with family is.

The CEO of Tune Hotels, Mark Lankester, is in the business of creating great holiday experiences. His work keeps him busy all year round, but he makes sure he carves some time out for a family vacation every year. This Christmas, he is organising a big journey to Edinburgh to meet up with the rest of his extended family.

“Family holidays are about spending time together away from home and having a great experience. They’re about discovering new and interesting things. Children learn through seeing different cultures and society. I am half British and half Chinese, and my grandfather has Scottish blood. We’ve managed to trace our lineage back to the 1700s, and this year, about 30 of us from around the world are gathering in Edinburgh for a great family reunion.

“I believe the experience will be wonderful for my son, for he will be able to see where he came from and what his roots are,” says Lankester

Lee Shen-Li, a homemaker, keeps her sons rooted by encouraging them to participate in traditional festivities. Her older son, five-year-old Gavin, loves the lantern festival.

He enjoys eating mooncakes at his grandmother’s house after a family dinner, and playing with lanterns. Lee fully encourages these traditions, as she believes these experiences build character and personality.

“I don’t share those beliefs, but I want my kids to be exposed to the experiences so that they learn that other people have beliefs and that they should learn to respect them,” she says.

Experiences can also be created every day at home. Shanti’s work as vice-president of human resources at her company leaves her with little time outside of work. But on free Saturday mornings, her favourite thing to do with her husband and son is to lounge around in their pyjamas and linger over breakfast till lunchtime sometimes.

“It sounds indulgent, but I feel that I am teaching Carl how to relax and de-stress. There’s a place and time for everything. We don’t have many of these days, but whenever it happens, it is true together time,” she says.

Parents today are more savvy than ever, often exposing children to experiences beyond the classroom. Kids now go to cooking classes, artjamming classes, writing workshops and more, and it’s all in a day’s work, or rather, play. More families are also taking their children travelling and exposing them to different places, people and cultures.

Enaliza Zaman believes school is where kids receive formal education, but experiences outside of school allow them to see beyond what they read, hear and see. In turn, these experiences create memories that educate them.

“When we go on trips, we make it a point to visit museums or historical sites. The kids get really fascinated with the things that they see at these places and they learn history.

“We took the kids to Langkawi recently and brought them to Makam Mahsuri. They were very fascinated with the story. They concluded that the people who accused Mahsuri of having an affair were cruel without our pointing it out to them,” says Enaliza, who is a trainer at the English Language Teaching Centre under the Ministry of Education.

Enaliza believes it’s not just knowledge that children gain from field trips. “Experiences allow them to realise who they are, what surrounds them and what their role as a human being is. They also get them to think and question. That is what parents want for their kids,” says Enaliza.

Former editor Celine Yong also believes in museums as a good learning ground. One of her favourite places to bring her son Choy Yan Kai is the Art Science Museum in Singapore. They have gone for the Andy Warhol, Harry Potter and Titanic exhibitions there, and Yong believes those excursions have enriched Yan Kai.

At the Andy Warhol exhibit, children were encouraged to think about colours and the emotions associated with them.

“We brought my nephew too, and when the kids did the activity, they both came up with different things. And that is what art should be. There is no good or bad art. It’s about freedom of expression.

“When we came back, I reinforced the idea of colour and emotion whenever we did art. Now, without prompting, Yan Kai will tell me why he chooses certain colours and link it back to how he was feeling when he was painting it. These are the little things we do,” says Yong.

Lee also t hinks immersion is the best way to learn. She has been taking her sons Gavin, five and Gareth, three, out to see the world since they were young. She’s taken them to Aquaria, Petrosains, the Butterfly Park, Bird Park, Planetarium and more, to engage their senses.

“I want them to see, touch and feel, rather than learn only from books. When they’re young, the brain is forming connections. Any stimuli they get will reinforce those connections. The younger they are, the more connections there are, so I want to keep stimulating them by engaging them in new experiences all the time,” she says.

“It’s our job to help them understand the emotions and make sense of how they connect to the world. By constantly exposing my son to things, eventually he’ll be abl e to piece everything together and understand his place. This is so that at whichever stage in his life he is, he understands where he is and knows how to assess each situation and decide what is best,” says Yong.

She wants to free up her son’s imagination, like what her father did for her. She teaches him how to cook eggs, recites Chinese poems to him and gets down on all fours to play Power Rangers with him. She is a moth er who sees endless possibilities in her son, and hopes he’ll come to realise that himself, too.

Lee is always on the lookout for creative projects for her kids. They do mosaic art, painting and music. She documents these activities on her blog, Figur8 (www.figur8.net), which has the tagline “Nurture for the future.” She believes that new experiences help her sons see the potential in everything, and tries to nurture their innate curiosity whenever she can

Carl certainly appreciates Shanti’s efforts to ground him in good experiences and memories.

“Carl has had 13 birthday parties, all with different themes, and in different locations. For his 12th birthday, he wanted a scrapbook of his first 12 years in photographs. It’s a fantastic gift and something that he looks at quite frequently.

“A happy childhood is your foundation for life,” says Yong. “When you create happy memories for children, they will internalise that and grow up to be healthy young adults who are able to deal with life’s curveballs. To be rock solid, one must have a sense of selfworth, and that will come from the reassurance given to the children by parents.

“It also got me thinking that everything I am doing now is to prepare him for when I am gone. The things I’ve been doing are the most normal things like having ice cream on a hot afternoon, cooking in the kitchen. One day, when he grows up, on a hot afternoon, when he suddenly feels like ice cream, he’ll remember me.

“Ultimately, a child will one day grow up and steer his own boat through the rough sea, and as a parent, I can only prepare him and give him enough strength to get through this journey,” says Yong. 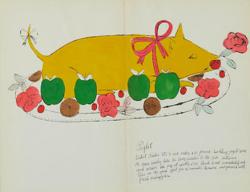