A man shouts slogans as he participates in a demonstration in Paris following the death of Amini in September. At least 14,000 people have been arrested since protests began. Photos: AFP

Almost three months of protests in Iran have left the clerical regime facing an existential challenge by shattering taboos and shaking its ideological pillars in a push for change that shows no sign of retreating.

The demonstrations, which erupted in mid-September following the death of Mahsa Amini who had been arrested by the Tehran morality police, are a reflection of pent-up public anger over economic shortcomings and social restrictions, analysts say.

While there have been protests in Iran before, this movement is unprecedented due to the duration, its spread across provinces, social classes and ethnic groups and readiness to openly call for the end of the clerical regime.

Banners of supreme leader Ayatollah Ali Khamenei have been set alight, women have openly walked down streets without headscarves, and demonstrators have at times sought to challenge the security forces.

Iran, for its part, accuses hostile foreign powers of stoking what it labels "riots", chiefly its arch-foes the United States, Israel and their allies, but also exiled Kurdish Iranian opposition groups in Iraq whom it has targeted in repeated missile and drone strikes.

In an apparent response to the protests, Iran's prosecutor general said Saturday that the morality police had been abolished. Activists received the declaration with scepticism, given the continued legal obligation for women to wear a headscarf.

French President Emmanuel Macron, after holding a landmark meeting with exiled Iranian dissidents last month, described the movement as a "revolution" by a generation of "young women and men who have never known anything other than this regime".

"It was very obvious from the beginning that the protests were not about reform or the morality police, but were targeting the entire regime," said Shadi Sadr, founder of the London-based Justice for Iran group that campaigns for accountability for rights violations.

"What is happening is a fundamental challenge to the regime," she said. "They know they are facing a real threat from protesters." 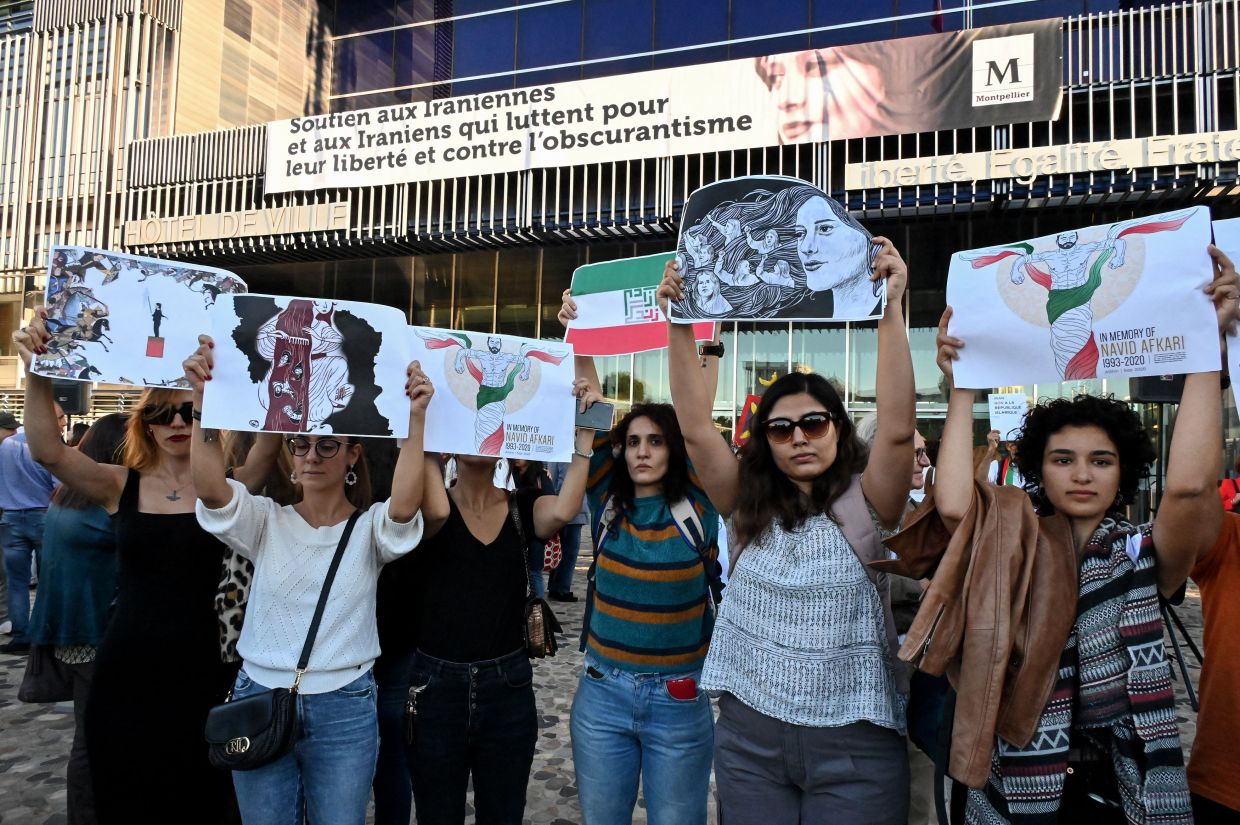 Women protest with placards in Paris. International condemnation of the crackdown has been massive.

"The mood in Iran is revolutionary," said Kasra Aarabi, Iran programme lead at the Tony Blair Institute for Global Change, arguing there had been a growing trend of anti-regime dissent for the past half decade.

The republic has ruled Iran, first under revolutionary founder Ayatollah Ruhollah Khomeini and then his successor Khamenei, since ousting the more West-leaning and secular shah in 1979.

It swiftly imposed policies including sharia law and compulsory headscarves for women in public.

Rights groups accuse the regime of committing gross human rights abuses ever since, including extra-judicial killings and abductions abroad and holding foreign nationals hostage at home.

It now carries out more executions than any country other than China, according to Amnesty International.

The republic remains at odds with Western powers over its nuclear programme, and has also spread its influence throughout the Middle East.

International condemnation of the crackdown has - for now - buried any expectation of reviving the 2015 deal on the Iranian nuclear programme that the United States walked out of in 2018.

The regime is also active in Russia's invasion of Ukraine, tightening relations with Moscow and supplying Russian forces with cheap and plentiful drones, which have been used to attack Kyiv and other cities.

Yet it is at home that the republic is now facing its greatest threat.

"Never before in its 43-year history has the regime appeared more vulnerable," Iran scholar Karim Sadjadpour, senior fellow at the Carnegie Endowment for International Peace, told the US journal Foreign Affairs.

In response to the challenge posed by the protests, the authorities have mobilised what Amnesty International has described as their "well-honed machinery of repression" with a fierce crackdown that has combined the use of live fire with mass arrests.

At least 448 people, including 60 minors aged under 18, have been killed by security forces, according to IHR.

More than half of the deaths have come in areas populated by Kurdish and Baluch ethnic minorities where the protests have been particularly intense, the rights group noted.

At least 14,000 people have been arrested, according to the UN, including several prominent figures such as the rapper Toomaj Salehi who could face the death penalty if convicted.

Iran's judiciary has already sentenced six people to death over the protests, in what IHR calls "show trials without access to their lawyers and due process".

It says 26 people, including three minors, are facing charges that could see them hanged.

Sadr warned it would be rash to predict the regime was on the verge of falling.

"Dismantling a regime like (this) is a very difficult task. There are pieces needed that are missing for this to succeed," she said, pointing to a need for greater organisation among protesters and a stronger international response.

Unlike when Khomeini challenged the shah from exile in the late 1970s, there is no single leader to the protest movement.

But Aarabi said the protesters were drawing inspiration from several figures, all representing different constituencies. Most are deemed such a menace by the authorities that they have been locked up.

"These protests are not leaderless," he said, adding the demonstrators believe "they are in the middle of a revolution and there is no going back".

Such figures include the freedom of expression campaigner Hossein Ronaghi, who was released in November only after a two-month hunger strike, the prominent dissident Majid Tavakoli who remains in prison, and veteran women's rights activist Fatemeh Sepehri.

"I continue to fight with the intensity of passion and hope and vitality inside Iran," the rights campaigner Narges Mohammadi, who was in detention even before the protests, said in a message from Tehran's Evin prison.

"And I am sure that we will win," she said in the message relayed by her family to the European parliament. - AFP