The threat of Delta: Parents worry about their children when schools reopen

Not all parents are eager to send their kids back to school.. Photo: Unsplash/Kelly Sikkema

New evidence about the Delta variant’s ability to infect and spread even among those who are fully vaccinated has been particularly alarming for parents of young children who are still not eligible for the Covid-19 vaccine.

Many parents who thought their children faced limited risks of getting the coronavirus are now reassessing their stance. Health experts said parents should be extra careful with the highly contagious variant, which is causing infection spikes in Los Angeles County and many other parts of the country.

But several also stressed that it’s important to keep the risks in context, adding that children could still go back to school with proper precautions.

Katherine Williamson, a pediatrician in Orange County, California, said she has seen an increase in coronavirus cases among young patients in recent weeks, as well as an uptick in parents who are vaccinating eligible children – both of which she attributed to the rise of the Delta variant.

"Parents should be making sure that they’re doing everything they can to keep their kids safe when they have an unvaccinated child in their family,” Williamson said.

Yet the risk of severe illness remains low for those who are vaccinated against Covid-19, and the rate of infections, hospitalisations and deaths are much higher for those without the shots.

With the right guidelines and increased vaccinations among those who are eligible, Williamson said, it is still possible to keep young people protected.

"Kids are only as safe as who they are around,” she said.

Though the Delta variant was already known to be more transmissible than the original coronavirus, a new report on an outbreak involving 469 people in Massachusetts found that 74% of infections were among people who were fully vaccinated. And a confidential report produced by the Centers for Disease Control and Prevention pulled together other vexing signs that the variant spreads more easily among fully vaccinated people than previously thought.

Children younger than 12 are not yet eligible for the Covid-19 vaccine, and those ages 12 to 17 are still lagging when it comes to obtaining the shots.

The rise of the Delta variant has spurred a rash of changes in recent weeks, from new testing and vaccination requirements for federal, city and state employees to the revival of previously abandoned mask guidelines.

The family recently encountered a vaccinated, unmasked man at an ice cream shop who told them he had no idea that there’s no vaccine available yet for children younger than 12.

"My top thing to reinforce to others is that there are still many members of our community who cannot be vaccinated either because of age or health reasons, and that they can theoretically be infected by vaccinated people,” said Strauss, 41.

Despite the risk, he and his wife are hoping that rising case counts in Los Angeles County won’t preclude schools from opening in the fall – so long as the schools remain diligent about masking, testing and other safety procedures.

On Thursday, the Los Angeles Unified School District announced that all students and employees will be required to take weekly coronavirus tests, whether they are vaccinated or not. Children younger than 12 are not yet eligible for the Covid-19 vaccine. Photo: Unsplash/AtomsThe school debate

"Children need to be in school,” said Julie Swann, a health systems engineer at North Carolina State University. "Those of us who have experienced last year, we know it.”

Swann recently published a report that found that without masking in schools, an additional 70% of children could be infected with the coronavirus within three months.

Her research also shows that even if masking is required in all schools, she still expects 40% of elementary school students to be infected within three months.Even with that knowledge, she said, schools should reopen for the 2021-22 school year, with additional mitigation strategies in place.

"Schools and counties and states can also increase testing of their population and the community which will also help slow the disease spread,” she said.

As the Delta variant spreads, public health officials are continuing to keep a close eye on vaccination numbers, which remain woefully low among young people.

"It’s crystal clear that vaccination rates among younger people across the board in Los Angeles County are much lower than they are for older people, and with more opportunities for intermingling,” Los Angeles County public health director Barbara Ferrer said during a news briefing on Thursday.

Only 24% of black people and 33% of Latino people ages 12 to 15 had received at least one shot, according to data Ferrer presented, compared with 50% of white people and 76% of Asian people in that age group.

In total, about 50% of teens in Los Angeles County ages 12 to 17 have received at least one dose of the vaccine, Ferrer said, compared with about 70% of county residents overall.

"We still have close to 4 million residents across the county not yet vaccinated,” Ferrer said. "This risk of increased spread from this variant within our county remains high.” 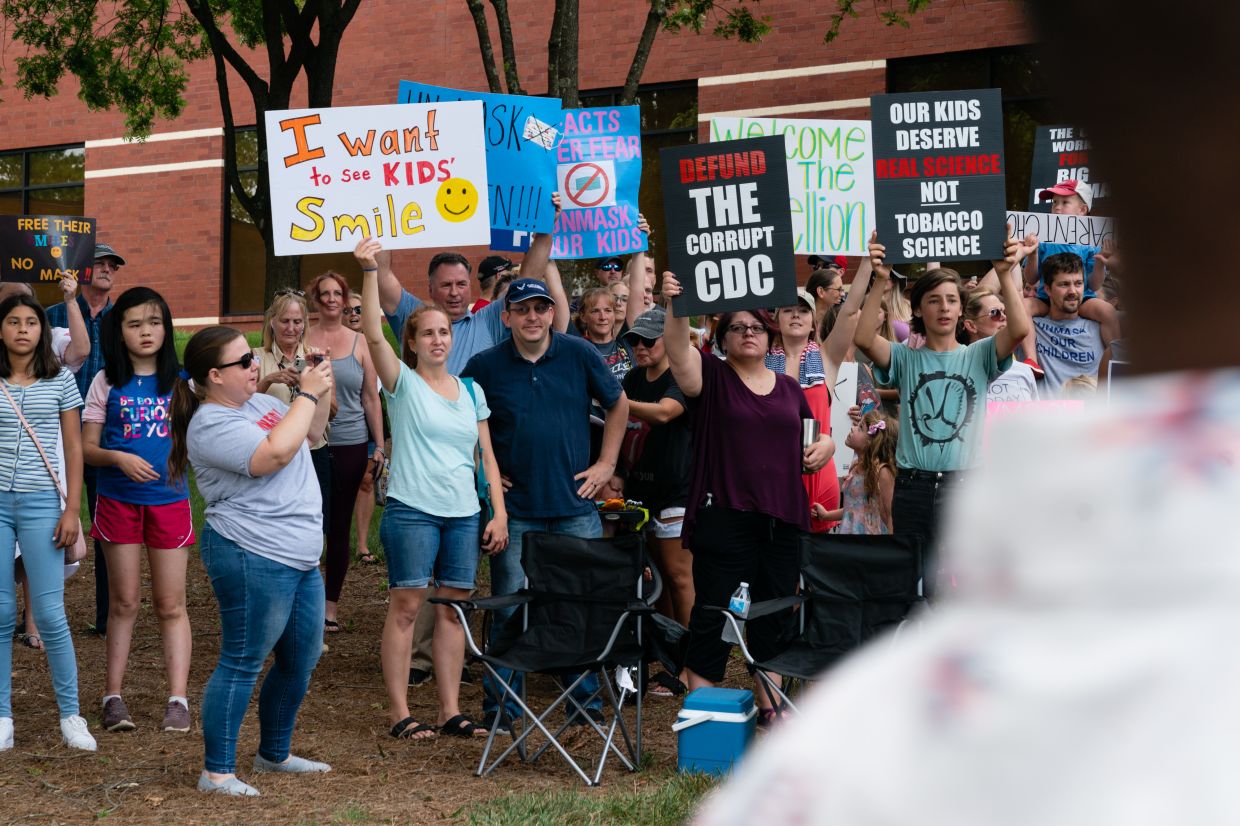 An 'Unmask Our Children' protest in Suwanee, Georgia, in the US as some parents do not agree with the advisory for children to be masked indoors. Photo: Bloomberg

Not all parents are eager to send their kids back to school.

Deborah Poppink, 57, of Mar Vista, said one of her kids prefers learning at home, while the other is looking forward to returning to theater class but unsure of how it will work with masks.

Poppink, who previously worked as a teacher, is also frustrated with the district’s new weekly testing mandate, which she said is essentially asking vaccinated families to carry the weight of the unvaccinated.

"If everyone was vaccinated [there] would be no need for weekly tests,” she said. She also noted that there is still a lack of guidance around when and where testing will be done, and how school-related activities like carpool rides, sports teams and parents visiting campuses will fit in.

"This is a public health crisis and I imagine it’s going to get worse rather than better,” she said. "Kids are not going to keep their masks on all day long. Even in regular times, kids like to sneak to the bathroom to vape or just do what kids do.”

Her daughter, Delilah, 16, said she is less concerned for herself than for fellow students who haven’t been vaccinated.

"There’s no way to know who’s been vaccinated,” she said, "so we have no way to protect the unvaccinated kids.”

Pediatricians remain concerned about the spread of the Delta variant, with Williamson noting that parents should avoid socialising with unvaccinated people, including family members, "because then they can bring that virus home to their children.”

With unvaccinated kids preparing to once again huddle in classrooms and on buses, a surge in infections linked to school reopenings "can’t not happen,” he said.

But most experts also agreed that a "safe and sane” approach to Covid-19 protocols – along with more adults doing their part to get vaccinated – should at least eliminate some of the risk.

"If you weigh the risks and the benefits... I think it’s worth sending kids to school as long as there are mitigation measures in place,” said Eric Ball, a pediatrician at Children’s Hospital of Orange County Primary Care Network.

Like Williamson, Ball has seen an uptick in coronavirus-positive patients in recent weeks, with the vast majority of infections among unvaccinated teenagers and children who are too young to be vaccinated. The cases are presenting in different ways, he said, from young children with cold-like symptoms to older kids who are getting "pretty sick.”

Feelings of fear and sadness that he experienced last year have given away to frustration, he said, since adults could have done more to prevent the current surge.

He also said that most of the teachers and adults in schools should be vaccinated, and that nearly every student in middle and high school now has the opportunity to get a shot.

"So that really should be our push at this point,” Ball said. "To make sure we vaccinate as many people as possible to protect the kids who are too young to be vaccinated.” – dpa