Ain appreciates all the support she has received but admits that the vicious comments about her have been hard to take. Photo: Reuters

Even though she’s likely been the most talked about 17-year-old in the past few weeks, Ain Husniza Saiful Nizam insists that she’s “just an ordinary girl” who likes reading comics, art and K-Pop. In fact the eldest of five siblings reckons she might be the “naughty kid”, who is always “exploring”.

Then two weeks ago, she shared her thoughts on a teacher’s joke that she didn’t find funny, and unwittingly opened the can of worms on rape culture in schools. In the ensuing weeks, the fifth-former has mustered all she has to stand her moral ground in upholding what she believes is right, refusing to let the issue of rape jokes be clouded in ambivalence.

“I just saw something that was wrong and I spoke up about it. I believe it was the right thing to do. And, seeing so many others come forward about their own experiences after I did, because their voices were not heard before, convinced me that I have a responsibility to (continue to) speak up, ” says Ain during a Zoom interview recently, accompanied by her father, Saiful Nizam.

But speaking up has come at a cost for her and her family.

They have had to contend with the pervasive sexism and misogyny that normalise rape culture, with Ain bearing the brunt of attacks that question everything from her attire to her morals. 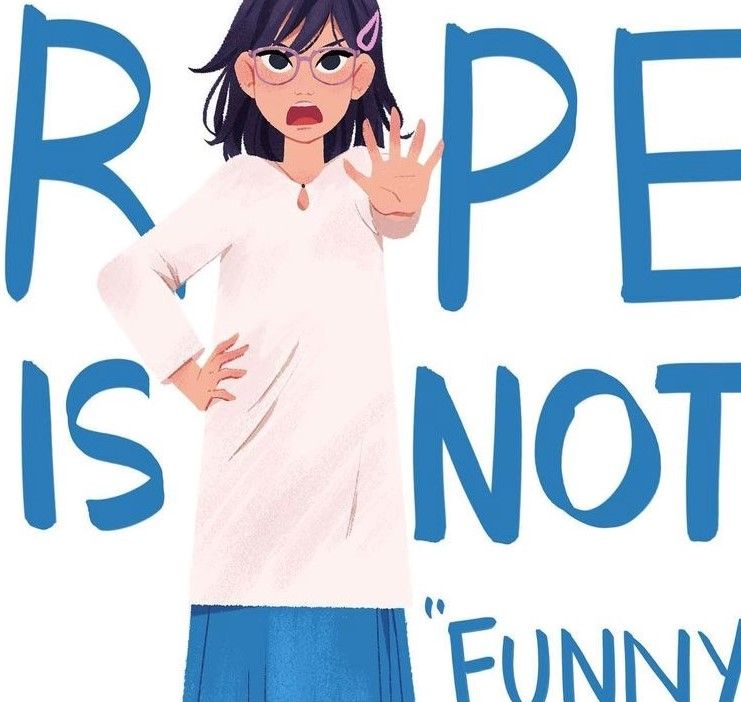 Ain has a lot of support from netizens but she's also been viciously attacked. Illustration: Instagram/AydaNadhiraAin hasn’t been to school since her TikTok video went viral two weeks ago simply because she doesn’t feel safe.

“I may seem ok, but I am traumatised. I don’t feel safe enough to go to school yet because most of my schoolmates have turned against me, ” she shares in an interview. “I feel sad because I really do love my school and my teachers. All I did was speak up against something that was wrong. Is this how you treat a student? Because that is what I am... I am a student and my main focus is studying for my SPM this year. I feel my school has failed me and the education system has failed me.”

After she reported the comment made by the teacher (who’d made light of rape in class) to the police, Ain received a rape threat from a fellow schoolmate. On social media, she has received mixed reactions. The positive and supportive comments were affirming but it still didn’t make it any easier to see the cutting and cruel remarks that aim to undermine and dismiss what Ain stands for.

The viciousness has been hard to take, she admits.

“I wake up afraid in the middle of the night sometimes and get startled if someone barges into a room, ” she shares.

Although Ain is fully aware that “everyone is entitled to an opinion”, she feels that social media users should be mindful of the impact their comments have.

“It may take you just a few minutes to post a comment but your unkind words can affect someone for hours, days or even longer. It can ruin someone’s day or it can scar them for longer. Just think about that.

“Going through all this made me understand how others who have experienced harassment feel and why they don’t want to speak up. It really is quite traumatic. I don’t respond to the comments but it gets to me. I am shocked when I read some of the comments about me and it can bug me for days sometimes, ” she says.

But Ain isn’t backing down. With the support of her family, she’s determined to #makeschoolasaferplace for girls and boys. Saiful is standing 100% behind Ain but he is also careful not to let the young schoolgirl get overwhelmed by it all.“I don’t want anyone else to go through this or to feel unsafe in school. The teacher who made those comments must be held accountable and the student who threatened to rape me too. The officials need to take this seriously. Why does something have to go viral before the officials take action. My voice should count. And all students should feel safe enough in school to call out anything inappropriate they face or if they feel unsafe, right?” she says.

Ain’s father, Saiful Nizam, is standing by her 100% but is also deeply concerned about the well-being of his young daughter.

“We are very proud of Ain and her courage to speak up and I will stand by her. Change takes time but there has already been some positive change on social media with many other youngsters coming forward to share content that is beneficial and speak up courageously too.

“But Ain is still a young girl and as her father, I feel sad that she’s had to face such a situation in the first place. As an adult, I am ashamed to see the comments that have been made about her and the situation, ” he says.

Standing for what they believe

“We’re an ordinary Malay family, ” says Saiful. “There is really nothing special about us but my wife and I have always trusted our children to explore, make mistakes and learn from those mistakes. Of course if they cross the line, there are repercussions. But, we believe every child has the potential to grow and achieve great things. I trust Ain and I’m proud of her, ” says Saiful who has been by Ain’s side throughout this period.

Saiful says that he has been very careful about the interviews and “live” sessions that Ain participates in. While he realises it is important to let Ain push for change in schools through her #makeschoolasaferplace movement, he doesn’t want her to be overwhelmed.

“I need to protect Ain. There has been non-stop requests for interviews and discussions but Ain is still a teenager and I don’t want her to be burdened and overwhelmed by all this. She still needs time for her schoolwork and also time for herself, ” he says.

Ain says that her siblings, “except the little one”, are aware of and understand “what’s going on”.

“Even my 15-year-old brother can understand how wrong it (the comment made by the teacher) is. Students, don’t be afraid to speak out and call wrong action out. We are going to be the future leaders of our country. They have to listen to us. Our opinions are valid. Our voices count. I was afraid too, but I knew that it was wrong and I couldn’t be silent and I can’t be silent, ” says Ain.

Ultimately Ain is a schoolgirl. The onus should be on the adults and authorities to act concretely to stem unhealthy and unsafe practices in school to validate Ain’s call for a safer environment. It’s now up to the women MPs who have pledged their support to deliver.