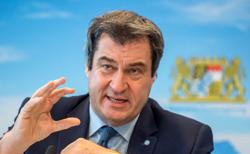 A hairdresser cuts the hair of a client sitting in a space separated by transparent panes at a hair salon in Dortmund, western Germany. Photo by Ina FASSBENDER / AFP

With a burst of confetti at one minute past midnight, Marco Trapani reopened the doors to his hair salon - and for his customers, it wasn't a minute too soon.

Trapani and other hairdressers across Germany had to shut shop in mid-December under the country's second coronavirus lockdown. But from Monday, they are allowed to get cutting again.

"In the middle of the Christmas season. That was quite a punch in the gut," Trapani says of the lockdown. Now he stands in his Dortmund salon beaming at his first customers of the year: two women and four men.

"It was high time," says Sonia Leesberg, who runs a clothing store in the rural western region of Sauerland.

Leesberg models her wares in pictures posted on social media. "So obviously you want to look good," she adds.

Another client, Markus Prandzioch, warns Trapani that his wife had a go at trimming his hair during the lockdown.

"Let's just say," the 52-year-old stylist says, scissors in hand,"your wife didn't screw up so much that it can't be salvaged."

Everyone is wearing a mask, as is the norm by now in German public life.

But this time around, Trapani is advertising extra safety: A sign hangs on the door informing customers about the salon's new air filtration system.

Trapani is booked out for the whole of March - and there's a similar situation across the whole industry.

Hairdressing associations have said that many salons will extend their opening times to meet demand. It was not uncommon for hairdressers to offer midnight appointments on the first day of business.

For Trapani, the night shift is just a short one, lasting two hours, before his next round of hair appointments starts at 9 am (0800 GMT). - dpa 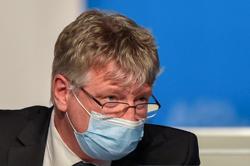