Creativity at India’s Durga Puja in keeping with strict SOPs Traditional drummers perform outside the suburban railway station as they wait to be hired for the Hindu festival 'Durga Puja' celebrations, in Kolkata Photo: AFP

A trickle of visitors instead of the usual crowds and signs reminding visitors to maintain distance are only some of the many ways in which India’s annual Durga Puja festival has adjusted to the Covid-19 pandemic.

The annual Hindu festival is the biggest celebration in eastern India's West Bengal state, but it is also observed across the country.

The five-day festival that began last week is marked by rituals, street food and cultural programmes.

Towering marquees locally referred to as pandals are set up by neighbourhood committees to showcase representations of the 10-armed goddess Durga slaying the buffalo demon Mahishasura with a spear - a symbol of the victory of good over evil.

Restrictions in place to contain the coronavirus, which has hit the country with incredible force, mean that organisers can allow only 45 people inside a marquee at a time instead of the usual thousands. Restrictions in place to contain the coronavirus, which has hit the country with incredible force, mean that organisers can allow only 45 people inside a marquee at a time instead of the usual thousands. Photo:AFP

Creativity has remained despite the health crisis, however, with pandal decorators responding to the pandemic in a series of innovative ways.

At several pandals , the evil demon Mahishasura is depicted as "coronasura," a demon with a head shaped like the new coronavirus with its distinctive club-like spikes. Others depict the demon's earrings and other pieces of jewellery as the virus.

"We got several requests to create a coronasura," said Sujit Pal, treasurer of the image makers association at Kumartuli in Kolkata, where a community of potters specialise in making the figures out of clay.

"The virus is evil like the demon and Ma Durga will give us the strength to defeat it," Pal said.

In another image of Durga which has gone viral on social media and is from a town in northern Bengal, the goddess wears a lab coat and is slaying a demon whose head is shaped like the virus with a giant syringe. 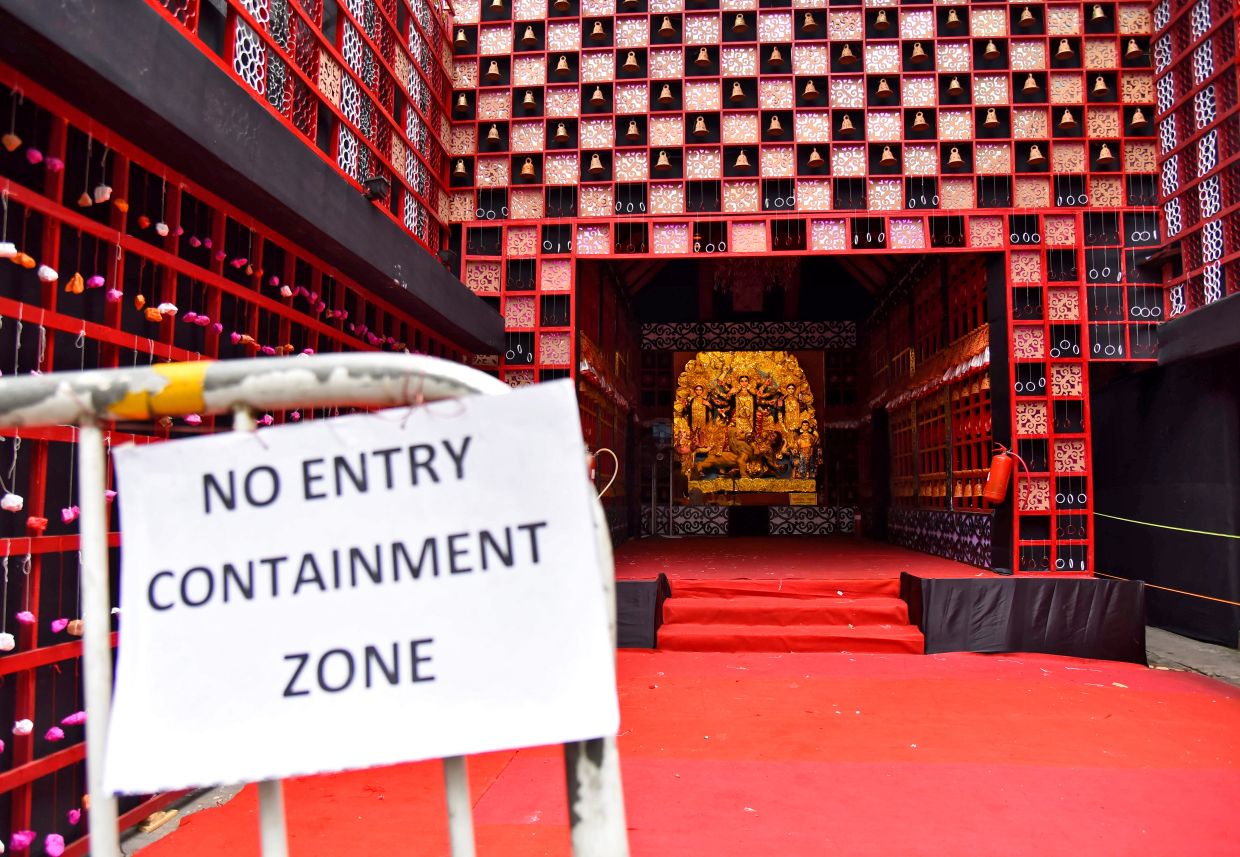 A health notice hangs on railing of a closed "pandal" or a temporary platform, on the first day of Durga Puja festival, amidst the spread of Covid-19 in Kolkata. Photo: REUTERS/Ranita Roy

Durga's four children, who are also gods and goddesses, are depicted as various frontline workers. One is a nurse, another a community health worker and a third a sanitation worker. Her elephant-headed son Ganesha wears a police officer’s uniform.

The plight of migrant workers stranded by the government’s lockdown with only four hours' notice in March have also found their way to the pandals.

Thousands of them were forced to walk hundreds of kilometres back to their villages.

A pandal in West Bengal capital Kolkata depicts the goddess as an exhausted female migrant worker leading her children home.

"During the lockdown, all I remember seeing on TV and reading in newspapers was migrant workers returning home on foot, some of them dying on the road," the image’s creator artist Rintu Das was quoted as saying by The Telegraph newspaper.

"The indomitable spirit of the women walking home with children overwhelmed me. In my mind, they embodied the goddess," he said.

The neighbourhood pandals in West Bengal are known for exploring various themes, often linked to current affairs ranging from environmental degradation to the plight of sex workers.

In 2000, a year after an Indian Airlines flight was hijacked by militants and flown from Kathmandu to Kandahar in Afghanistan, a pandalswas created to represent Durga and her children as the trapped passengers inside the plane.

Other themes have included the 1991 Gulf War and the assassination of former prime minister Rajiv Gandhi.

A glimpse of the pandals is also becoming easier to access, with some organising committees now broadcasting their rituals on social media such as Facebook and YouTube and over local cable television channels. - dpa To die with no regrets
Starchild: Through drawings, Malaysian children tell us about their favourite month
The pain healers
How to know it's time to drop your child's afternoon naps
Making our cities safe
Second chance at life
At 72, she made her first documentary to advocate against ageism
'I died too': A year after outbreak, Wuhan kin struggle to move on
Nepali grandma's winter warmers a legacy worth sharing
Girls said they missed school because they could not access sanitary products