Women say they will fight ugly attacks on Harris

Harris, who was born in Oakland, California, has been the victim of online falsehoods for more than a year that say she is not eligible to become president because her parents were not born in America. Photos: AP

In the weeks before Joe Biden named Senator Kamala Harris his running mate, women's groups were readying a campaign of their own: shutting down sexist coverage and disinformation about a vice presidential nominee they say is headed for months of false smears and "brutal” attacks from internet haters.

The groups put the media on notice in recent days that they will call out bias - one campaign is dubbed "We Have Her Back” - and established a "war room” to refute sexist or false attacks as they happen.

They didn't have to wait long. Within minutes of the presumptive Democratic nominee’s announcement Tuesday, false information was circulating on social media, claiming that Harris had called Biden a "racist” and that she is not eligible to be president.

The women's groups say their efforts are informed by the sexism Hillary Clinton faced from Donald Trump, some of his supporters and the media during the 2016 campaign.

"This time we understand the patterns, and this time we have the organisational infrastructure to push back,” said Shaunna Thomas, executive director of the women's advocacy group UltraViolet, which released a 32-page guide for media along with a coalition of groups including Color of Change PAC, Planned Parenthood Votes and Women's March.

While the groups have primarily been led by Democrats, their efforts are backed by nonpartisan groups and some Republicans.

The war room will call out bias and disinformation against women in both parties up and down the ballot, said Tina Tchen, CEO of Time's Up Now, which fights sexual harassment in the workplace. 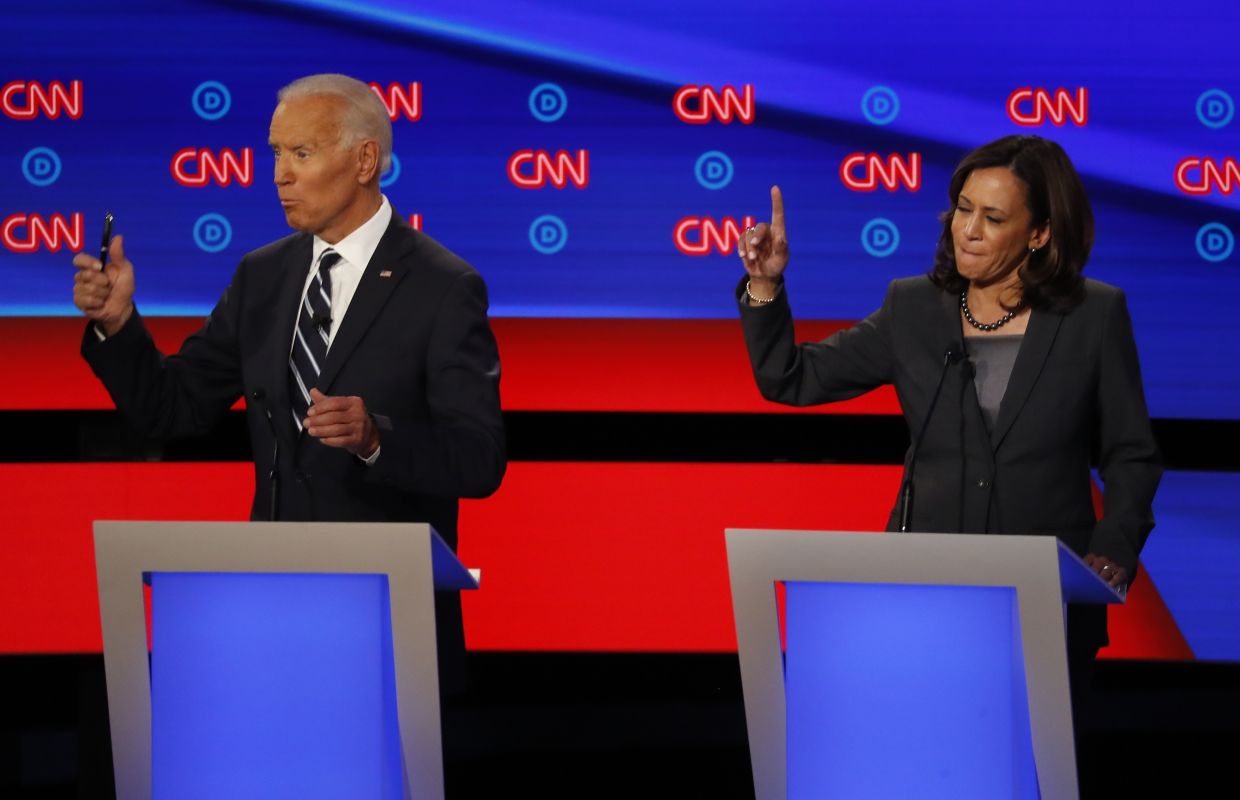 If elected, Harris would be the country’s first Black vice president

The groups say intense scrutiny of a vice presidential nominee is to be expected, but women are often unfairly criticised as overly emotional, weak or unqualified, or for their appearance or demeanor in a way that men are not. The attacks, which include false smears and threats of violence online, not only hurt campaigns but dissuade women from seeking office.

Christine Todd Whitman, a former New Jersey governor and Republican, said Biden's running mate will be at the center of an "ugly” social media campaign from online bullies.

If elected, Harris would be the country’s first Black vice president. That has invited not only sexist but racist commentary and misinformation around her candidacy.

Harris, who was born in Oakland, California, has been the victim of online falsehoods for more than a year that say she is not eligible to become president because her parents were not born in America. More recently, Facebook users added a new twist to the misinformation: that since Harris is not eligible to be president, if Biden didn’t finish his term the presidency would automatically default to House Speaker Nancy Pelosi, a Democrat.

There is no truth to that - Harris is a natural-born US citizen who’s eligible to be president - yet the misinformation has been shared by thousands of Facebook users. Facebook has labeled the posts as false but has not removed them from its platform.

The misinformation hearkens back to the conspiracy theories in 2008 around Democrat Barack Obama, the first Black US president, that claimed he was born in Kenya, not the United States. Those claims were amplified by Donald Trump, then a reality TV star, and gained so much traction during the campaign that Obama produced a birth certificate showing he was born in Honolulu. 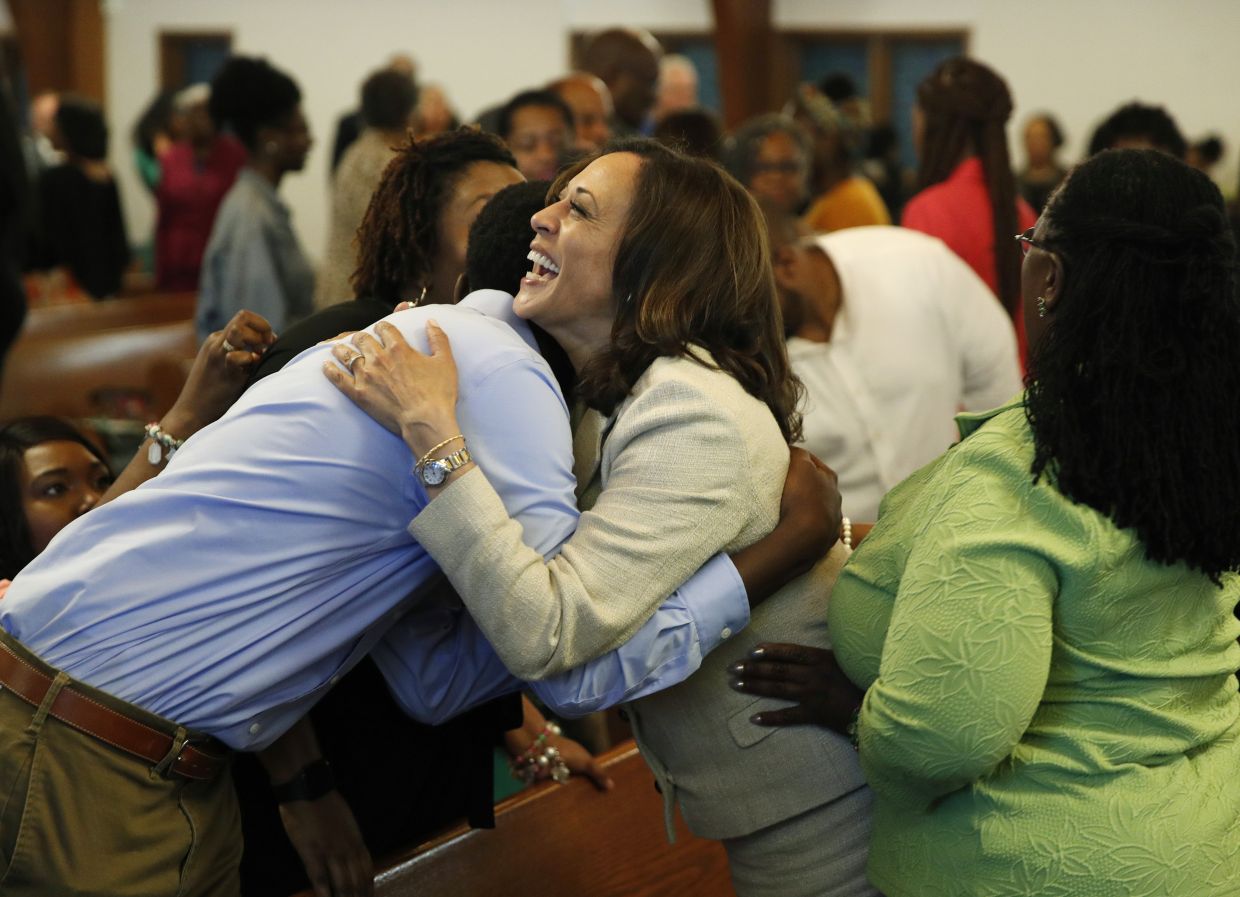 Intense scrutiny of a vice presidential nominee is to be expected, but women are often unfairly criticised as overly emotional, weak or unqualified, or for their appearance or demeanor in a way that men are not.

The latest attacks on Harris’ citizenship were highlighted in a letter from more than 100 lawmakers from around the country and the world sent to Facebook CEO Mark Zuckerberg and COO Sheryl Sandberg calling on them to remove misinformation, and posts or accounts that threaten women.

"Much of the most hateful content directed at women on Facebook is amplified by your algorithms which reward extreme and dangerous points of view with greater reach and visibility, ” said the letter, which was spearheaded by Democratic Rep. Jackie Speier of California.

Cindy Southworth, Facebook’s head of women’s safety, said the company will work with the lawmakers to "surface new solutions.”

"Abuse of women on the internet is a serious problem, one we tackle in a variety of ways - through technology that identifies and removes potentially abusive content before it happens, by enforcing strict policies, and by talking with experts to ensure we stay ahead of new tactics," she said.

But mere minutes after Harris was announced as Biden's running mate, pro-Trump social media personalities and conservative news outlets claimed Harris called Biden a racist during a televised Democratic debate last year. (In reality, she said,"I do not believe you're a racist” before criticizing his past opposition to policies around school desegregation.)

The road to becoming Biden's running mate had been littered with misleading online attacks on women under consideration.

Former national security adviser Susan Rice was accused of committing crimes in office, and Democratic Gov. Gretchen Whitmer, who authorized strict stay-at-home orders in Michigan this year, was pelted with memes and images likening her to Adolf Hitler or an "evil queen.”

Harris is likely prepared for the onslaught ahead this year after watching how 2016 unfolded on social media, said Sarah Oates, a political communications professor at the University of Maryland.

"She is going to be vilified, no matter who she is," Oates said. "In 2020, people are much more attuned and aware of it. That doesn’t mean it’s going to make it better, but at least you can be more aware of the toxicity." - AP

Looking forward to a meaningful celebration with family
Advocates for senior citizens urge government to do better for our elderly
Have you Wordle-d today? The popular word puzzle has a Malaysian version too
Feeding stray dogs is a kind gesture, but please spay them too
6 ways to help your child handle stress
Children experience stress too. How do we help them cope?
Starchild: Malaysian children love balloons in all shapes and sizes
Knit one, purl two: Crafty men who love to knit
Short skirts cause road accidents? Chauvinistic ban called an 'attack on women'
Denmark's queen a favourite for modernising the monarchy, sidestepping scandal