Katz Tales: How to prepare your cat when moving homes

Make sure you bring along your cat's cardboard box when you're moving house. — 123rf.com

We just heard that one of our neighbours intends to retire and move away. Usually when people relocate, there’s conversation about staying in touch but as it’s Charlie’s people, all we’ve talked about is how it will impact the cats.

Swooner and Charlie are best friends. Our middle cat trots out every morning and goes straight across the street. The two boys spend all day together and I go there in the evening to collect Swoon when it’s bedtime.

Although there are 10 years between them, the two cats share a history because they are both rescue boys.

Charlie was abandoned years ago, poor soul. He hung about in a garden down the road for some months. Then he met my neighbours and they took a shine to him. Long story short, he moved in with them and was named Charlie.

Having a new home, he got settled in, eating proper meals of wet food supplemented with biscuits. Less pleasantly, he went to the vet and was neutered, vaccinated and dewormed.

Living in the lap of luxury, he has a dog house filled with blankets, a cardboard box, a seat with a rug, and a host of toys, but he retains a core of alley cat independence and swagger. All this time, he has steadfastly remained an outdoor cat.

Now he’s off on another adventure, a big move. Usually, relocating cats is a bit of a challenge. We moved from Sarawak to West Malaysia, and from Melaka to Kuala Lumpur, and while we made sure the cats were settled before going out for their walks, we still had trouble.

Scoop who was a remarkable boy, being both super bright and street smart, ended up sitting in front of our house number but two streets away, and Au got turned about on the roof and had to be guided home.

As he can’t read this, I can be frank with you: I love Charlie but he’s not Mensa material. He is friendly and he will show you his tummy and let you pet it if you ask, but I wouldn’t bet that he could find his way home from the next road.

Luckily, I don’t think he goes very far at all. Interestingly, Swooner is also not a roaming cat. The two boys travel about two doors up and two doors down, but most of the time they’re at Charlie’s, inside the compound and hanging about, playing with the cardboard box, the scratch pad and taking turns to snooze in the dog house.

I have wondered if it’s because they’re both rescues. Charlie wandered the streets and was a bit tattered when he found his home, and Swooner was so thin and ill, that he almost died.

Perhaps, and I may be anthropomorphising here, they have seen enough of the big bad world out there, and have decided they’re best off at home.

Anyway, when Charlie’s mum announced she would be moving, Charlie’s needs were the focus of our conversation. Apart from the relocation stress itself, there are some extra challenges. The biggest is that his new home is still under construction and there isn’t a compound yet.

As cats don’t like moving anyway and Charlie is old, we think he may be 14, my first instinct was to offer for him to stay with us. But the impulse didn’t last more than a second because it’s not in his best interests.

Charlie loves his family. When he sees his mum and dad, his tail goes straight up. Then he rolls over and begs for tummy rubs. While he quite likes me, and he is generous enough to let me pet him, we both know that I’m just a neighbour to him. 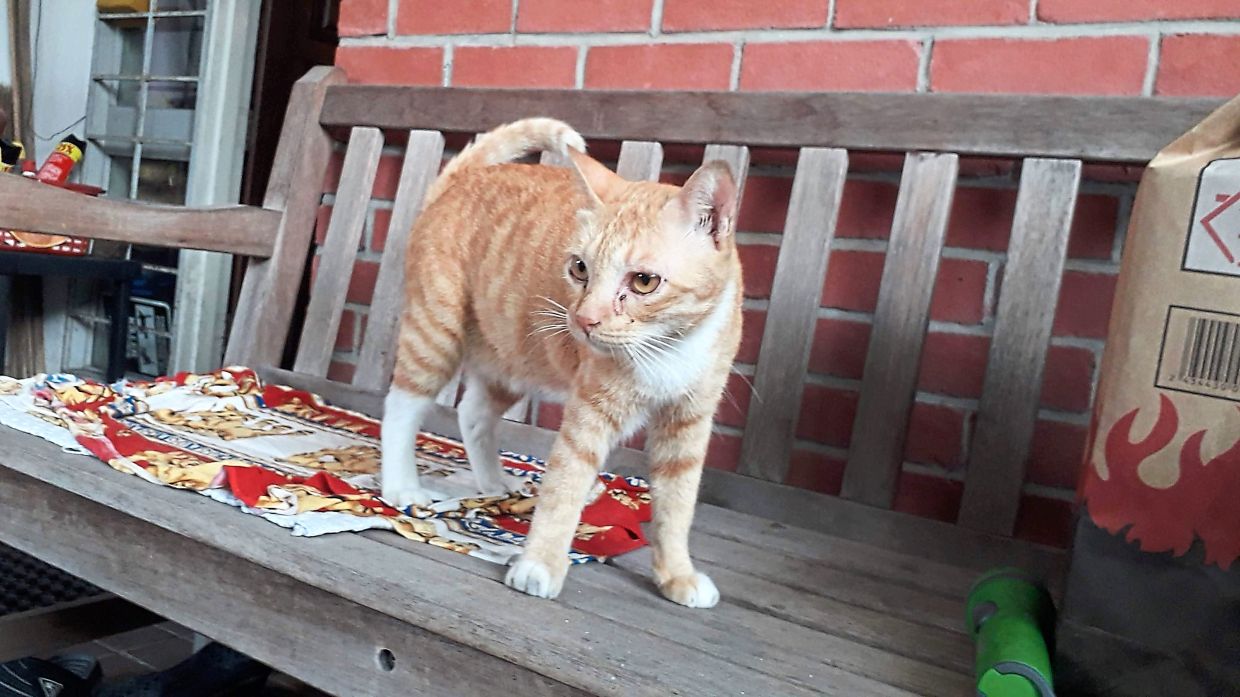 Swooner is very protective of his mum and can get jealous of other cats that try to approach her. — Ellen Whyte

Also, while Swooner is over there a lot, my naughty fuzz doesn’t approve of visitors. When Charlie was all over me a few weeks ago, and then trespassed in the garden, Swooner walked up and peed on me. Not kidding! While he can’t talk in Human, my jealous little cat marked me as his mummy in the only way he knew. If Charlie moved in with us, Swooner would be beside himself with jealousy.

As for Target, our senior cat, well, on a good day he walks past Charlie with stiff paws and an icy determination not to recognise there is another cat nearby. On a bad day, the two old boys shriek insults at each other. Then, if us mums don’t go out and tell them to knock it off, the fur may fly.

Sometimes, moving house is rough on cats and people. However, Charlie’s family will move in stages over the next few years. Only when the garden is ready, and when his parents are fully retired, will Charlie go on his next adventure. It will upset Swooner but he has Target and Tic Tac to play with. As for Charlie, he will have his mum and dad.

In a way, this is a happy story. Charlie was abandoned in his early life, but those dark days are well behind him. Today, he has a family who love him. But, oh boy, when the day comes that we’re waving them off, it will be a wrench.

Moving house with your cat

There are lots of stories of cats walking home across towns (and sometimes countries!) after their family has moved house, but for every happy ending there are thousands who go missing forever. Here are some thoughts for helping your pet settle in safely when you move.

Cats are territorial animals, navigating their domain by sight, sound and scent. They’ll be upset at the move, and not thinking straight, so even the most sensible kitty is going to be a bit panicky and prone to making silly decisions. The idea is to soothe and support their adapting to the new place.

When you move, be sure to take along your pet’s cardboard box, favourite toy, rug and other knick-knacks as hand luggage. Install your kitty with its belongings in a room with a door. This allows your pet to get used to a new house and to mingle the smell from the old home with the new one.

Your pet should stay indoors with you for a week, longer if possible. After this, have very short supervised walks outside where you monitor constantly. Very slowly, allow your pet out a little longer each time. After two weeks or so, allow short walks outside. But keep an eye on your pet. Be prepared for frightened bolts at loud noises or other upsets. Make sure the door is open for a safe and quick retreat.

As other cats may see your pet as an “invader” and there may be loud dogs and excited children about, plan for it to take some weeks for your pet to settle. Cats need a while to recognise where they are and to orient themselves. Once they know what their garden looks like, and how it smells, they also need to inventory where the other cats live, whose territory is where, and so on. 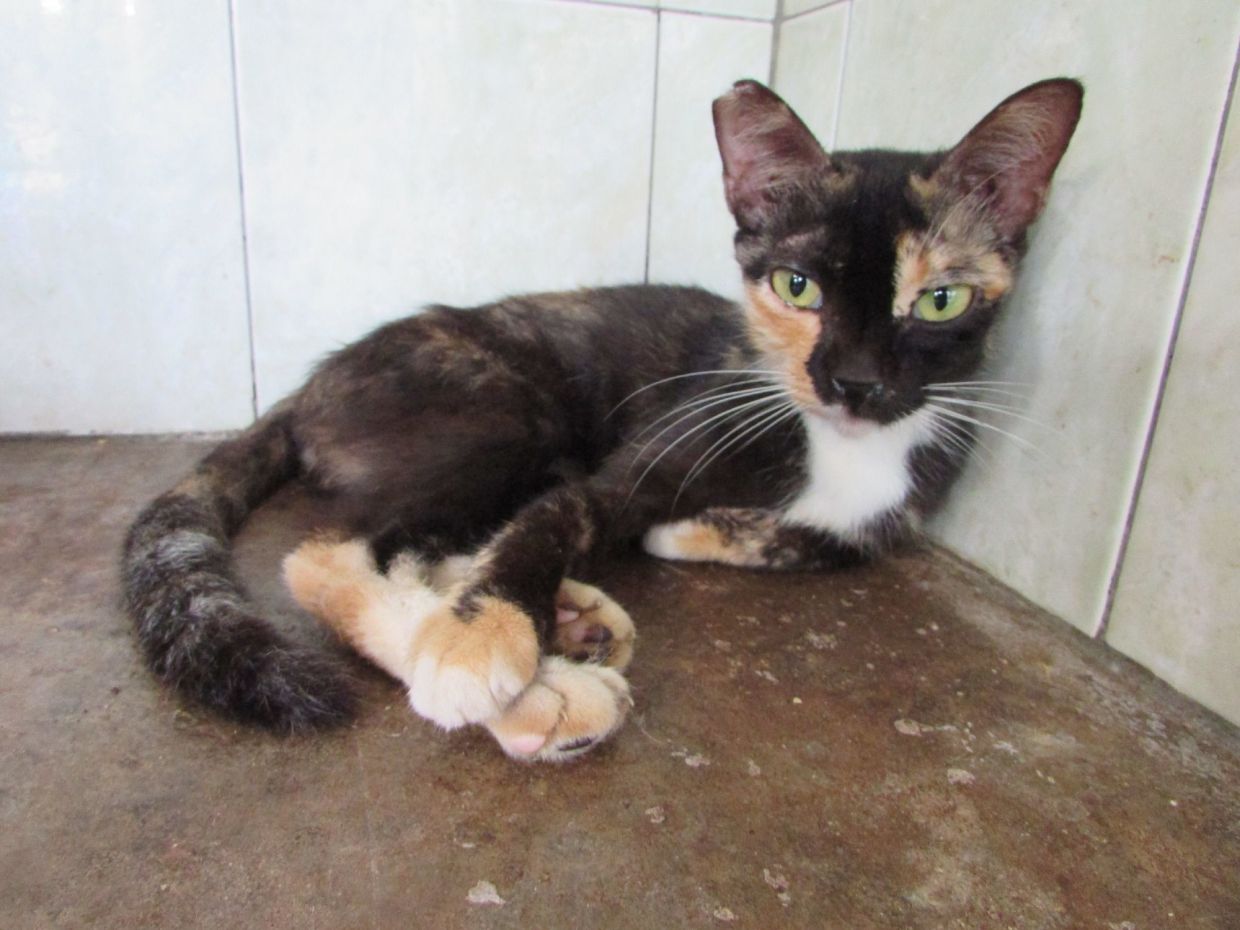 Raisin is up for adoption. — PAWS/Agnes Lim

Raisin is the longest-staying cat at the PAWS shelter, having lived there since she was a tiny kitten. She will be a year old in August. She is vaccinated, spayed and healthy.