For father battling cancer, this was a graduation to victory lane

MAIN Jacob, left, with his parents Ted and Cindy Foxworthy and a vintage race car after he received his Speedway High School diploma. Photos: AP

Jacob Foxworthy and his parents waited patiently as their car crawled through pit road at Indianapolis Motor Speedway on this most unusual of graduation days.

When his turn came, the Speedway High School senior climbed out and walked across the race track's iconic yard of bricks, his mother and father holding hands as they watched. He crossed the finish line like his 121 classmates to wrap up a school year like no other: without in-person classes, without a senior prom and without the traditional pomp and circumstance.

The Foxworthys didn't need a cap-tossing celebration to express what this day meant.

Seeing Jacob in a cap and grown with his father in tow meant Ted Foxworthy had achieved a milestone of his own after a four-and-a-half-year battle with a rare form of cancer.

"I had one daughter graduating college and one daughter getting married, and I knew I’d be around for those two things," Foxworthy recalled, explaining his thoughts when he was first diagnosed with mantle cell lymphoma in 2016.

"I knew my wife was going to be OK. She’s a fighter. So most of my focus was on Jacob. He was 14 and I didn’t want him to grow up without a dad. I wanted to be there when he walked across the stage. I didn’t want him going, 'I wish my dad was there.’" When Ted was diagnosed with cancer, he set two goals: celebrating his youngest child's 18th birthday and seeing him graduate.

He was there Saturday, behind the wheel of the family car, driving through Gasoline Alley, and he was there for the family photo with the old race car that had been brought to the speedway from the high school lobby six blocks away.

And then, as school officials whisked other families on and off the track, he grabbed his son's arm, pulled him tight and gave him the hug of a lifetime.

School principal Luke Zartman and speedway officials came up with a plan that worked within the state's social distancing guidelines to give these seniors an unforgettable moment.

"When we realised we weren't coming back and we realised the seniors would miss out on so many things at the end of the year, to imagine them not being properly celebrated at the end was heartbreaking," Zartman said. "It just adds a bright spot to an otherwise dark time to to send them out the way they deserve." 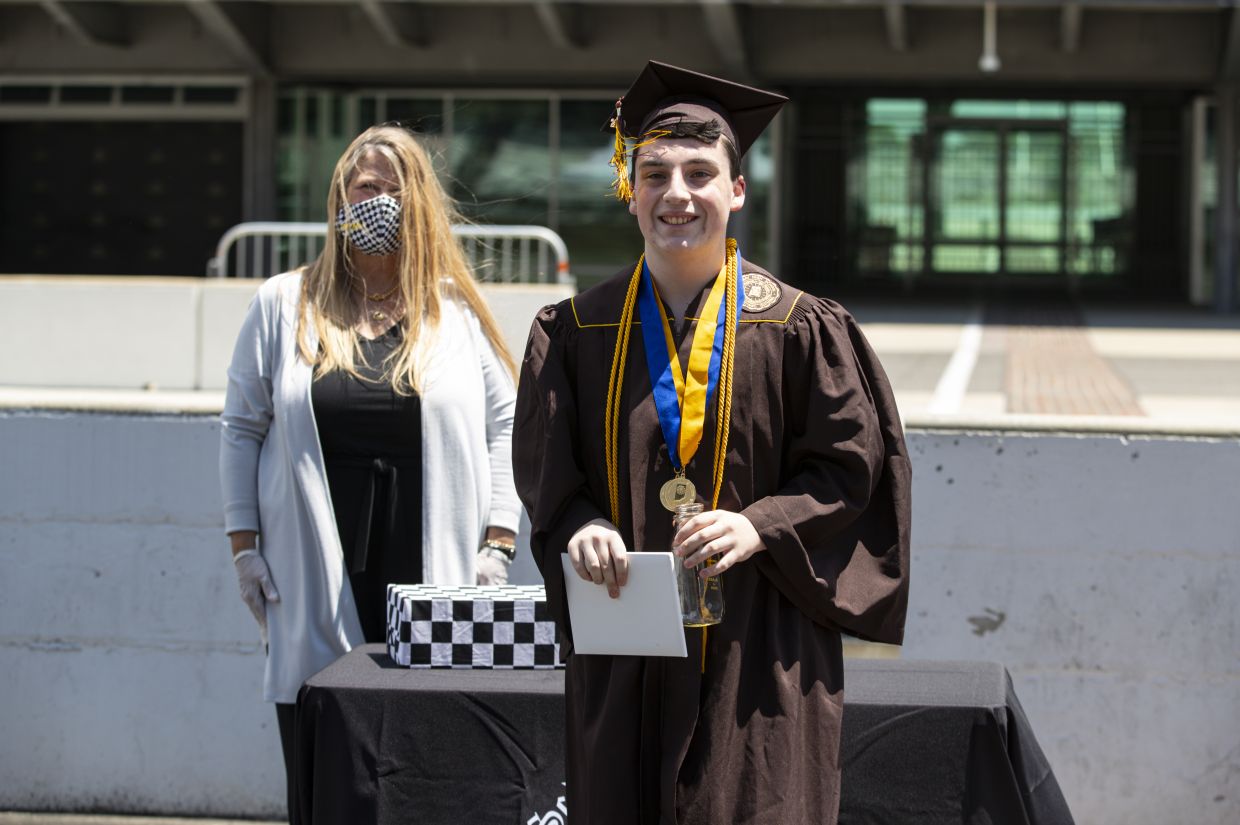 Having his father present at his graduation was the best thing Jacob could ask for.

Sporting venues certainly have played their part in the coronavirus fight, from testing sites at major league ballparks and NFL stadiums. Field hospitals were constructed at stadiums in California and Washington state and Texas Motor Speedway and Daytona also have held graduation ceremonies.

But this one felt different.

The silent speedway roared back to life during what is usually its biggest month, bringing the tiny enclave of Speedway along for the ride.

Residents lined Main Street and Crawfordsville Road for a parade. Some stood in front of race shops with handmade signs bearing the names of seniors. One by one, the cars came into the speedway, forming a three-car front row at the yard of bricks - for all the world looking like the front row for the Indianapolis 500, postponed this year to August.

"This has been amazing, ” said Cindy Foxworthy, Ted’s wife. "For the whole town of Speedway to come out for these kids the way they did really is a dream come true.”

In an email sent to Zartman a few days ago, Ted Foxworthy thanked school officials for finding a way to stage graduation during a global pandemic.

"What you have provided means more to my family than just the ceremony, ” he wrote. "This has become a victory for my family.”

What he left out was the part about his first challenging summer four years ago, undergoing chemotherapy, and how his 14-year-old son cared for him.

"Jacob had to go through this with us, he and Cindy. She was still working and he was taking care of me," he said. "That’s asking a lot for a 14-year-old kid to spend your summer getting stuff when you’re dad needed it. I was like a pickle that summer. I was sitting in the recliner or laying on the coach, I was just gone, I lost a summer." 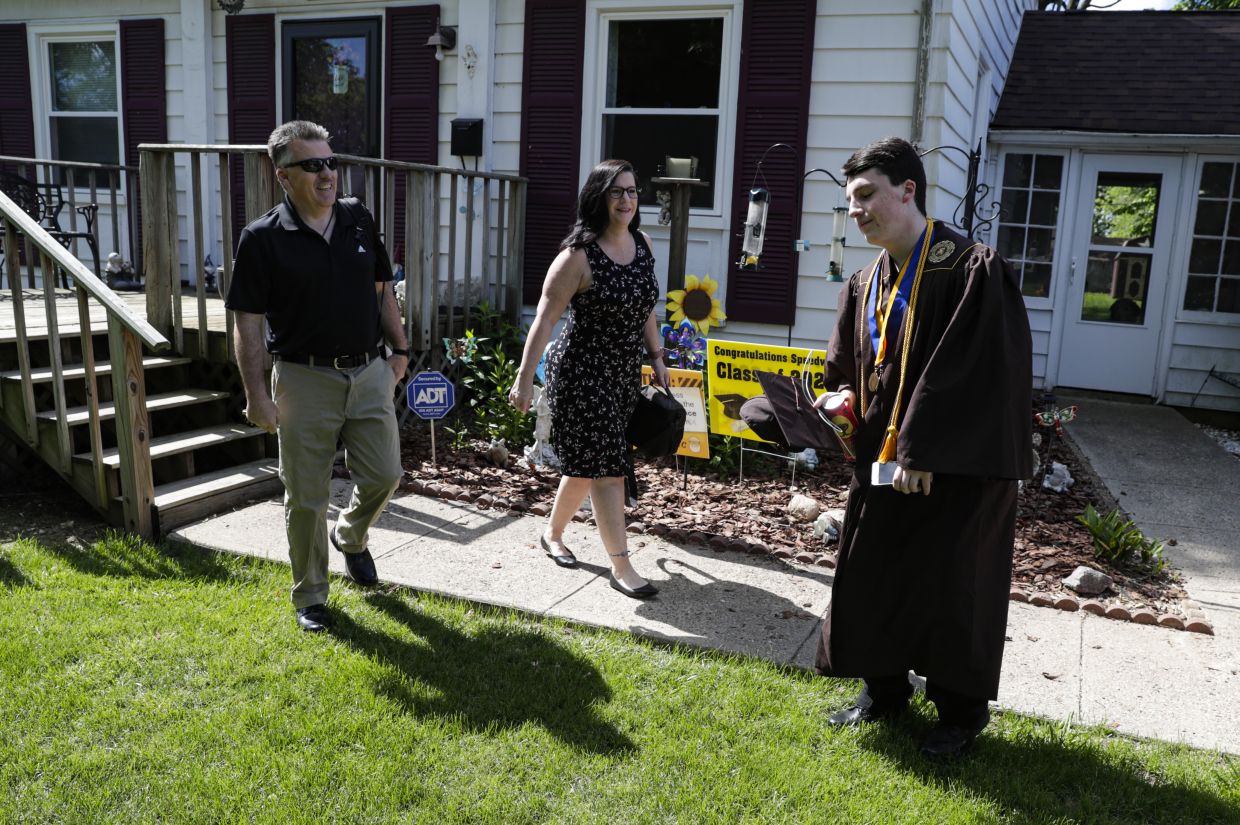 Jacob, right, and his parents Ted and Cindy Foxworthy leave their home to attend the Speedway High School graduation ceremony at the Indianapolis Motor Speedway in Indianapolis.

They grew closer, and Ted began counting the birthdays and the days to graduation amid a sobering prognosis. Those who survive the first six months with this aggressive form of non-Hodgkin lymphoma, Foxworthy said, still face about an 80% fatality rate after five years. For now, the 55-year-old accountant is working from home and savoring every special moment.

"That (my dad) is the most important thing about today, ” Jacob said.

A few minutes later, the family got back in the car and sped off down victory lane. - AP 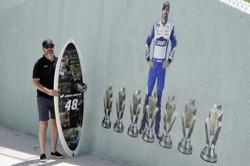 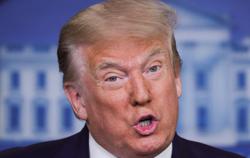 IndyCar cancels two races in Detroit due to coronavirus outbreak