Dear Thelma: He wants sex, and punishes me for not giving in

I am in a complicated relationship with a man who is about 10 years my senior.

I worked with K for a while and kept in contact with him after we left the company. We only started dating three years after that, around the middle of 2018. Slightly before that, I decided to go back to my studies.

Things were rosy in the beginning. He would ask me out for movies and dinner; he took his time to hug and kiss me (compared to most guys my age who would keep pushing for sexual relations after a couple of dates); and he would take the time to listen to my problems.

I did ask him where things were going between us, but he laughed and said something along the lines of: “That question is so serious! I am not much of a planner, so I don’t know.”

Anyway, things took a turn towards the end of 2018. He kept wanting to talk about sex and ignored the fact that I have assignments to complete. He didn’t understand why I would be up so early in the morning (although I have explained to him dozens of times that I have morning classes) and thought that would be the best time for us to be sexting each other. Whenever I tried to explain to him that I have deadlines to meet or classes to go to, he would brush it off and say things like how he sacrifices his time to see and text me, so I should reciprocate.

There were times when he actually said to my face that I was too boring or too fat. I lost it once when he called me “boring” but he said I was being sensitive and he was just teasing me. He did apologise. But he would go back to calling me “boring” whenever it suited him.

Also, whenever he was stressed out at work or if he fell sick, he would take it out on me verbally. He would sulk and accuse me of things that I never did (eg me seeing one of my male lecturers or dating other men). Or he would sulk when I hang out with my friends (even if the group consisted of all girls).

He also had this tendency to mutter rude comments about people in a passive-aggressive way (he likes to fat-shame people). He comments a lot about what a girl wears, how much makeup she has on. If a girl is attractive, then he will keep mentioning her to me. But if I ever mention any guy looking attractive, he would start sulking and say things like he isn’t good enough for me so I should just go after the other guy. There was this one incident where I said that an Avengers hero was attractive because the character himself is very noble. Let’s just say it didn’t go well the entire date after I made that comment.

Then at the start of last year, he started working at a new company. We usually meet over the weekends, but last year I barely saw him, maybe once every two months or so. He would make excuses such as he was busy and needed to work on the weekend, but then he sent me pictures of him at the gym or with whatever new toy he had bought. And whenever we do have plans to meet, he would cancel an hour after we have agreed upon a set time or he would just go silent the whole day.

After enduring this for a while, I decided to stop texting him because I saw no point in me putting in any effort if he couldn’t respect my time. When I started pulling away, that’s when he started reaching out more (he claimed it’s because he didn’t care about his job anymore). He tried to be sweet and sent me texts daily. I thought that maybe he had changed. But the moment I texted him back, he would try to turn the conversation into something perverted. This happened so often during the most stressful period of my study semester that I decided to just ignore him completely.

He still texts me every now and then. But I am afraid to reply because I keep thinking about how he turns the conversations into something perverted. He also keeps asking me when we are going to meet again. But I am too afraid to meet him because I am afraid he will push for us to have sex since he has been hinting at that for some time and I don’t want to do it.

What do I do? Should I just block him immediately or text him that we should just remain friends?

You write a really clear letter but I think you’re not reading it clearly for yourself.

First, he won’t talk about what he wants from the relationship. That’s OK at the beginning, when you are just getting to know each other. However, when you become close, both parties need to be clear on what the goal is. Because if one wants marriage and the other is thinking temporary romance or friendship, then there’s a mismatch.

Your man doesn’t want to discuss this, which leaves you in limbo. That is neither fair nor respectful.

Second, he does not recognise you have classes and that this means you have a routine to follow. Seriously? He thinks that your life isn’t important but his is? This is a huge red flag. This man is incredibly selfish and disrespectful.

Third, he hurts you and insults you, and then he gaslights you by pretending it’s “funny”. He also blames you for his hurtful behaviour. That is abusive.

Fourth, he’s trying to isolate you from your friends and colleagues by punishing you with accusations of cheating and by withdrawing affection. And that is the final straw because that is also seriously abusive.

My dear, this man is a textbook case of an emotionally abusive person. He is destroying your self-esteem and gaslighting you in order to gain control over you. He runs you down and when you don’t do exactly what he wants, he punishes you by withdrawing affection. In addition, he’s made you frightened to talk to him.

If you stay, he will make sure you have no friends to talk to and you’ll be so worn down that you’ll find yourself having that sex you’ve already said no to.

In short, the man’s a horror. Block him. Don’t ever speak to him again. Stay as far away from him as you can. Do not engage. Then go and do some reading on emotional abuse. Learn how it works, learn how to spot it. If you think you have a history of dating horrors, make an appointment with a mental health professional and have a few chats. Ask your college if they have a service.

To start you off, here are some classic red flags:

Abusive: They claim it was just a joke, or shift the blame by saying you’re too sensitive.

Healthy: They accept responsibility, apologise and do better.

Abusive: If they don’t get their own way, they punish you by withdrawing affection.

Healthy: Discussion followed by give and take. When they don’t “win”, they’re generous about it.

Abusive: They isolate you from your friends and family.

Healthy: They encourage you to have a good support system.

Abusive: They shame you, ignore your limits and punish you if you resist.

Healthy: They respect your limits. And if it’s a deal-breaker, you break up and both move on.

There are lots of nice men out there, so dump this one ASAP and go and find a lovely man you can be happy with.

Dear Thelma: I failed my final-year project twice and feel like a disgrace

Dear Thelma: I like my in-laws more than my overbearing father

Dear Thelma: Did saying no to pre-marital sex cost me this relationship?

Dear Thelma: My husband flirts with girls online and is unrepentant

Dear Thelma: My mother hates me and my family doesn’t care

Dear Thelma: I can’t see a future together but it’s hard to let him go

Dear Thelma: I dealt with drama, crushes and betrayal, all in the first year of university 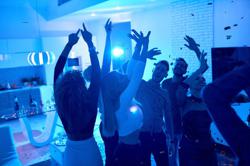 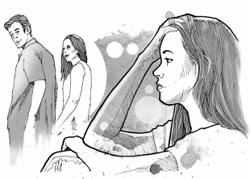 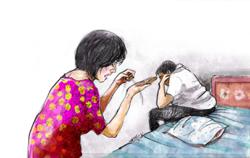