Many pregnant women pass this common virus on to their babies

It’s the eve of Hari Raya. Muslims throughout Malaysia are preparing to balik kampung to celebrate the occasion. But young parents Zul* and Aida* are in no mood to celebrate, neither will they be bringing their 10-month-old daughter Sofea* back to their hometown.

Unlike other proud parents, the couple do not want Sofea to be the centre of conversation among their relatives. Just about a year ago, Zul and Aida were overjoyed with the arrival of their firstborn Sofea.

Despite arriving slightly earlier at 36 weeks and weighing 2.7 kilogrammes, Sofea was declared healthy by the doctor before being sent home from the hospital. Everything seemed fine with the baby girl, except for prolonged jaundice, which was attributed to exclusive breastfeeding.

However, at seven months of age, Sofea could neither sit unaided nor reach out for toys or hold a rattle. Her paediatrician assured Aida that this delay was due to Sofea’s prematurity or early birth.

Two months later, Aida noticed that Sofea was not turning her head towards Aida when she called her name and that Sofea seemed oblivious to the noises around her. The couple consulted a developmental paediatrician who found that Sofea’s development was delayed.

Her head circumference was also smaller than others her age, implying that her brain was not growing normally. Hearing tests confirmed Aida’s worst fear, that Sofea has profound deafness. The couple was devastated.

Several visits to another paediatrician and a panel of blood tests confirmed that Sofea has congenital cytomegalovirus (CMV) infection, acquired in-utero during the early part of Aida’s pregnancy.

The CMV virus can be transmitted to baby from mum via breastfeeding, among other ways. Photo: AFP

CMV belongs to the herpesvirus family and causes a mild, self-limiting illness in healthy individuals. Symptoms resemble those of glandular fever, with fatigue, sore throat and swollen lymph glands.

In immunocompromised individuals, the symptoms can be severe, or even potentially lethal, affecting various organs including the eyes, lungs, liver and intestines.

Once infected, the virus stays dormant in the body for life with no symptoms at all. It can reactivate under certain circumstances, especially when the immune system is suppressed.

The virus is present in body fluids like saliva, tears, urine, semen and breast milk. Hence, transmission is through direct contact with the urine and saliva of an infected person, sexual contact with an infected partner, receiving a CMV-contaminated organ or blood, or breastfeeding.

A CMV-infected pregnant woman can also pass the virus on to her unborn foetus, like Aida did to Sofea. Most people would probably be unaware that they have been infected with CMV as the symptoms are similar to an average fever.

A past or recent CMV infection can be detected from blood tests, which are readily available in most laboratories. The test will check a small volume of your blood for anti-CMV specific antibodies (IgG and IgM), which indicate a past or recent infection.

Worldwide, CMV is the most common virus transmitted to the foetus during pregnancy. The US Centres for Disease Control and Prevention (CDC) estimates that one in five CMV-infected newborns end up having permanent health problems or disabilities such as hearing loss, vision loss and seizures.

With routine MMR (measles, mumps, rubella) immunisation nowadays, CMV has become the most important congenital viral infection, overtaking congenital rubella syndrome. There is little data on the prevalence of CMV infection among pregnant women in Malaysia.

A study conducted between 1961-1979, published in the Bulletin of the World Health Organization, found that 71.6% of 1,556 healthy Malaysians from various parts of the country have CF (complement-fixing) antibodies against CMV.

Meanwhile, a study conducted in 2007-2008, published in the Southeast Asian Journal of Tropical Medicine and Public Health, found that 105 of 125 (84%) apparently healthy pregnant women from Malaysian government hospitals had anti-CMV IgG antibodies, while another 7.2% had anti-CMV IgM antibodies.

Among these women, 15 cases of foetal abnormalities were detected during routine antenatal ultrasound scan. Another 17 cases ended in spontaneous abortion.

In a study published in a 1994 Medical Journal of Malaysia edition, 193 (11.4%) of 1,688 infants (0-4 months old) with various congenital abnormalities and other clinical syndromes, had CMV.

Out of these 193 babies, 10.4% had central nervous system (CNS) defects, while 80% had enlarged livers and spleens, indicating generalised disease.

It is known that 90% of infants with generalised disease will have evidence of CNS involvement by three years of age, with deafness being the most common complication.

It can be concluded from these studies that 70-80% of apparently healthy pregnant Malaysian women have had recent or past CMV infection, which can be unknowingly passed on to their foetus with serious complications.

CMV infection is easily mistaken for other common viral infections as symptoms of infection, like fever, sore throat and swollen lymph glands, are similar.

The highest risk of transmission occurs when the mother is infected for the first time (primary infection) with CMV during pregnancy. Transmission can be as high as 30-35%, resulting in 10-15% of babies born with CMV.

A previous CMV infection does not confer immunity, as a subsequent infection (secondary infection) can occur with a reactivation of the virus or a reinfection by a different CMV type. In such a situation, the foetal infection rate is much less at only 1.2% of babies.

It is estimated that about two-thirds of congenital CMV infections worldwide are contributed by women with past CMV infection. While the risk of transmission and infection of the foetus differs between primary and secondary infection, the symptoms, complications and severity are the same.

The risk of transmission is higher in the later part of pregnancy, but complications to the foetus is greatest when primary infection occurs in the first trimester of pregnancy.

Not all infected newborns will show signs of congenital CMV infection. On average, only 10-15% of infected babies show such signs. The other 85%, although infected, may appear to be healthy with complications of the infection appearing only months or years later.

This is illustrated in the case of baby Sofea where the infection was not obviously apparent at birth. Complications of infection include:

• Death in-utero (in the womb) or shortly after birth in about 4% of cases.

• Neurological complications causing intellectual disability, weak or spastic muscles, loss of coordination, seizures, or combination of these. This results in the child being unable to do daily living activities like moving around, bathing, eating, dressing and going to the toilet, and requiring life-long care.

• Significant cognitive impairment in about 60% of cases.

Progressive sensorineural hearing loss (SNHL) and learning disabilities are two very important complications, which can occur months or years after birth. Congenital CMV infection is the most common cause of non-inherited SNHL in children and developmental disabilities in developed countries.

Other clinical signs in the newborn are less specific and may occur in congenital viral infections other than CMV.

These include early and prolonged jaundice, liver inflammation, enlarged spleen, reduced blood platelets (causing bruises or minor bleed into the skin), fluid accumulation around the heart, excessive fluid in the abdomen, cataract and glaucoma.

The majority of women with primary CMV infection do not have symptoms. However, signs of possible CMV infection include fever, malaise, muscle aches, enlarged lymph glands around the neck, and less commonly, hepatitis (liver infection) and pneumonia.

Pregnant women experiencing those symptoms can have their blood checked for CMV infection. Whether it is a primary or secondary infection, she must inform her obstetrician, who can then monitor the wellbeing of the foetus by more frequent and regular ultrasound scans for features suggestive of foetal infection.

Confirmation of foetal infection can be done by testing the amniotic fluid after 20-21 weeks of gestation. Careful timing of amniocentesis is crucial to this sensitive and definitive test for foetal infection.

Following delivery, the baby must be assessed by an experienced paediatrician for possible congenital CMV infection through careful examination and various tests on the baby’s blood, urine, and saliva.

Early clinical trials treating infected babies with intravenous gancyclovir (GCV), an antiviral, for six weeks has yielded promising outcomes. A 1997 study published in the Journal of Infectious Diseases, found that there was a significant improvement or stabilised hearing in 16% of 30 treated babies.

A subsequent randomised clinical trial, published in 2003 in the Journal of Pediatrics, found that administering GCV might prevent hearing deterioration between six to 12 months of age. Additionally, GCV might also improve neurodevelopment outcome in treated newborns.

These trials, while not without limitations, give hope to families of infected newborns. Another trial comparing six weeks of treatment with oral GCV with 6 months of treatment, found that those treated for six months had 2.6 times increased likelihood of improved total hearing at 24 months of age.

Neurodevelopmental outcome was also better with longer duration of therapy. The management of an infected newborn is complex, requiring an expert experienced in treating and monitoring of such cases. Current management guidelines recommend antiviral treatment for six months.

For maximum benefit, a diagnosis of congenital CMV must be confirmed by the third week of life, so that treatment is not delayed beyond 30 days after delivery. Further studies are ongoing to determine if treatment is beneficial if it starts after one month of age.

Dr Koh Mia Tuang is a consultant paediatrician, specialising in paediatric infectious diseases, and a visiting clinical consultant at the Universiti Malaya Medical Centre. For more information, email starhealth@thestar.com.my. The information provided is for educational purposes only and should not be considered as medical advice. The Star does not give any warranty on accuracy, completeness, functionality, usefulness or other assurances as to the content appearing in this column. The Star disclaims all responsibility for any losses, damage to property or personal injury suffered directly or indirectly from reliance on such information.

Many pregnant women pass this common virus on to their babies 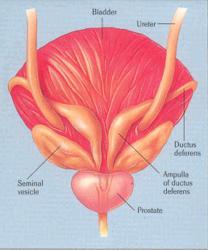 The problem with diagnosing and treating prostatitis