Ramona Dutt and her son Liam Yew provide meaningful assistance in the form of dry food, clothing, toys and books to the orang asli community.

One of the fundamental values Lionel Yew and his family have learnt from the Semai orang asli in Perak is to embrace life’s many blessings.

“The Semai community lead such simple lives despite their lack of modern amenities. They have taught my family and I how to count our blessings and appreciate life’s simple pleasures,” says Yew, 47, during an interview in Kuala Lumpur recently.

Since 2016, the Yew family has been making monthly visits to a remote Semai settlement in Kampung Ulu Slim, Perak. The village, a 30-minute drive from Tanjung Malim, comprises 200 people. Most villagers eke out a living from farming and by working as labourers at palm oil plantations.

Yew travels to the village to provide meaningful assistance in the form of dry food, clothing, toys and books. He is also trying to teach villagers to set up a hydroponics system to enable them to earn extra income.

Lionel Yew and his family believe in team work when it comes to lending a helping hand for charity. Photos: The Star/Yap Chee Hong.

“They are always grateful for the little things we bring, be it books, food or clothes. In return, they show their gratitude by cooking food for us – fresh vegetables, steamed tapioca and rice. Though simple, the meals are tasty as they are cooked with love,” says Yew, an off-road enthusiast who engages in volunteer work in rural areas.

In the span of 15 years, he has travelled deep into jungle settlements to help the needy. In 2014, Yew travelled to Kota Baru, Kelantan, to help with flood-relief efforts.

“Volunteer work comes naturally. During off-roading trips, my friends and I stumble upon orang asli villagers. We try to lend a helping hand by providing them with food and clothing. Essentially, one must engage in charity work with a happy and sincere heart.”

Yew is thankful his wife, Ramona Dutt, 51, and their two children, Liesl Mae, 20, and Liam Marcus, 16, are of the same mindset concerning charity work. His family members have helped at soup kitchens and orphanages, and assisted in teaching swimming to disabled children and washing the hair of homeless people in Jalan Ampang, KL.

Ramona Dutt and her son Liam Yew provide meaningful assistance in the form of dry food, clothing, toys and books to the orang asli community.

Dutt says children should be “doing good” from young. The more it is practised, the more the habit will continue in adulthood, she says.

“Parents want their children to grow up into caring and compassionate individuals. It is important to teach them the spirit of giving and helping out whenever possible,” says Dutt, a senior account executive with a network and broadcasting company.

Prior to each trip, Dutt and the children make a list of items needed by the villagers. Each month, a few like-minded friends chip in with cash that is used to buy essential provisions.

“Liam helps me to purchase dry goods. Those comprise bags of rice, milk powder, and other necessities. At times, we have friends who donate cookies and other treats for villagers,” says Yew, a sales and marketing manager for an online news company.

Liam looks forward to the visits to the orang asli settlement. There, he gets to explore the outdoors, mingle and play games with the children.

“In terms of mindset, the orang asli children are no different to youth in big cities. The difference is that they have a simple lifestyle without worrying too much about WiFi access or what’s happening on social media. There’s so much we can learn from them, especially survival skills and appreciating the outdoors,” says Liam, a Year 11 student at a private school in Subang Jaya.

“Through community service, people learn how to appreciate life. Anyone can do their bit for charity. It can be as simple as visiting a nursing home or helping out at an animal shelter. Find a cause that you support and ensure its ideals are those you support,” says Liam. 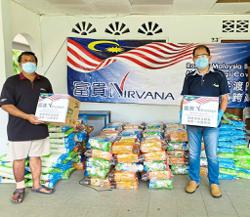 Group come together to give Orang Asli food aid