Age does not diminish passion for photography 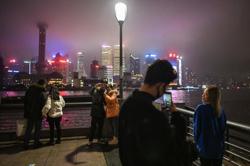 A mother and child on an outing in Guizhou, China. Photo: CHU CHOK SENG

“Pictures of people tell a story, scenery does not,” she says. To Chu, photography is about capturing moments and emotions.

One of her favourite photos was taken in Guizhou, China. It shows a mother carrying a child piggyback. It captured the local culture. Chu also took photos of people playing chess, an old man stripping bamboo, a farmer with a wooden plough pulled by a buffalo, and a Miao woman in tribal wear.

Chu and her sister-in-law visited Guizhou, one of the poorest regions in China, for two weeks in June last year. Chu wanted to visit Guizhou after being shown photographs of the place taken by her friend, Ng Siaw Shuan.

“I was intrigued by Ng’s photos of Guizhou,” Chu says. Ng, in his 60s, was a volunteer teacher in Guizhou for two years.

Chu visited Guizhou to check out the place. She had wanted to volunteer as a teacher but was disappointed to learn that China does not give out work permits to people who are 70 and above.

Guizhou is a mountainous region; hence, little farming can be done.

Says Chu: “In the early days, some natives headed to Shenzhen and other big cities to work. Apparently, a few headmen decided to turn parts of the mountainous areas into tourist attractions. Jobs were created for the natives and locals – they sold trinkets, turned homes into lodging houses and operated restaurants.”

In Duyun, a mountainous region, Chu observes the houses are preserved in their original structure. These homes are made of bamboo which grows in abundance in Guizhou. The townsfolk are dressed in traditional costumes.

The hilltop offers a stunning view of the village below at night.

“It is a village of a thousand lights,” says Chu. “The lights twinkle in the night like a huge Christmas tree.”

Chu, a member of the Photographic Society of Petaling Jaya, is happy to join the society’s outings whenever she can.

When the former senior finance manager opted for early retirement in 2006, she found time to rekindle her interest in photography. As a student, Yap had joined her school’s photography club.

Yap loves to take photographs of scenery as she is a nature lover. Her travels are largely focused on China, though Yap hopes to visit the Cinque Terre – a stretch of five picturesque towns along the Italian Riviera – some time in the near future.

Whilst most photographers store their digital photos in hard disks, Yap has a creative way of sharing her photos with friends.

Last year, she made six calendars using her photographs. Five are wall calendars and one, a desk calendar.

“I gave these calendars to close friends as Christmas gifts,” says Yap.

The calendars feature an autumn scene in Bashang, rice terraces in Guilin, the rapeseed flowers of Wuyuang, and the scenic Moon Bay, all in China.

“My friends like the calendars very much,” says Yap. She has also compiled her photos into “coffee table books”. To date, she has printed 10 such books on her travels.

Yap, who is a member of the Photographic Society of Petaling Jaya, says the many outings she has joined has helped her to stay fit.

“Often there is a lot of walking involved when we travel. Sometimes the terrain is challenging. Then there is heavy equipment to carry,” says Yap, whose camera bag weighs 5kg, in addition to her 1kg tripod.

Travelling is not without its hazards. Yap was knocked down by a 4WD during a China tour in 2009 – and survived to tell her story.

“The driver was reversing and did not check the rear mirror when he knocked me down. I fell and was under the 4WD. I had to bang the vehicle to draw his attention. Luckily, I escaped with bruises and torn pants. My camera lens rolled out but was not damaged,” recounts Yap.

These days, she is well prepared with a first aid kit.

“You never know when the kit will come in handy. So far I’ve helped three teammates in need while on such trips,” adds Yap.

Age does not diminish passion for photography