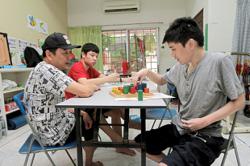 Datuk Jaffar and his wife, Datin Pat, posing for a family photo. The writer is in the back row, centre.

The immense contributions of Datuk Jaffar Indot may not be known to many, for he was a quiet hero who walked with utmost humility, touching countless lives along the way.

Every day we live our lives, we engage and talk to people. We judge them, we form opinions based on our own life experiences. We use ourselves as a measure, as a point of reference, as a barometer.

We do things completely incorrectly. Everything is topsy-turvy.

We live this life and set goals. For most, their purpose is to “be successful”. We want to leave something for those left behind to remember us by when we are gone.

We are pioneers, inventors, leaders, singers, athletes, novelists ... We have children whom we later encourage to have children and so on.

We strive to outlast death.

The fact of the matter is, what we often leave behind is pain. Infamy is well remembered. You write a hit song for it to become one of the most overplayed and hated songs of all time.

Our self-obsessed ambition to create a legacy has blinded us to the wreckage we abandon in our tracks. The trouble we cause, the hearts we break, the pain we inflict (albeit unconsciously); all cast aside as we strive towards achieving our goal.

Here comes the heartaching and expected clichés; after all I wouldn’t want to disappoint:

Dad was, well, quite simply, Dad.

A loving father (when he wasn’t working hard to provide for us).

A playful grandfather (in between naps).

A loyal friend, confidant, advisor, brother, consultant, company director, chairman, CEO and founder (forgive me if I have missed anything).

Seriously, Dad committed himself to his work whole-heartedly and never compromised. He was a stickler for detail and infused integrity in everything he touched. In his time he was involved in some pretty big things.

Back in the day, Dad was:

Datuk Jaffar and his wife, Datin Pat, posing for a family photo. The writer is in the back row, centre.

"... appointed by Tun Ismail to be part of a working party think-tank for what is today the Bumiputra Investment Foundation (Yayasan Pelaburan Bumiputra).

“I was staff assistant to the Secretariat and prepared the working papers for this Working Party (Think Tank).

“Jeff was the corporate thinker (who) always had the good ideas of marketing the unit trusts. He supported the business case. He had the trust of Tan Sri Governor and also a great sense of humour that relaxed the tone of the meetings. As we all know, Jeff had the ability to laugh with a twinkle in his eye, and was a real pleasure to work with.

“The work of the Working Party is today realised in the PNB and its mutual funds, today one of the largest in the emerging markets and also one of the key platforms for the NEP in terms of wealth distribution.

“It was my privilege to work with Jeff during that period and it was a mark of his public service that he always put the public before self.” – Tan Sri Andrew Sheng (president of Fung Global Institute, former chairman of Securities & Future Exchange, Hong Kong)

“The late Datuk Jaffar Indot, President of FRHAM, was a kind gentleman who was always appreciative of the contributions of both volunteers and staff at FRHAM. He was a well-respected leader whose initiative to raise awareness of FRHAM’s agenda in the area of reproductive health and family planning for the people of Malaysia has been highly appreciated. His commitment and dedication saw him through 30 years with FRHAM until his recent passing.” – Yeoh Yeok Kim, executive director, Federation of Reproductive Health Associations, Malaysia

“... A true gentleman and an outstanding chairman of the Malaysian Dutch Business Council Board on which he served for 10 years. Jeff greatly contributed to making the MDBC one of the leading business associations in the country.” – Netherlands Ambassador Harry Molenaar

“He has been a driver of the Malaysian Alliance of Corporate Directors (MACD).” – Prof Mervyn King (senior counsel and former Supreme Court judge, South Africa)

“A man of high principles, who did as he believed and not as how others expect.” – Tunku Yahaya Abdullah, director of MAA Group & Melewar Industrial Group

So, it was not his style to revel in his achievements. He was extremely private that way. He was just our Dad; the man we looked to for protection, advice, comfort and reassurance.

Humility is what I believe to be one of Dad’s greatest assets and mark of “success”. He followed his passion, his instinct and when that was wrong, he just kept following it, because what motivated him was problem-solving.

Dad paid attention to life. He led his life learning through other people’s experiences; they were his point of reference, people were his barometer. And with all that he embraced, he did calmly and with composure. Nothing startled him or ruffled his feathers.

"A frail young boy from a big family who never forgets his humble beginnings; rising to the top of his profession ... touching countless lives along the way. A man who never ceases to put himself through worthy causes for the betterment of his society.” – Victoria Institute Old Boys’ Association tribute

“Jeff was a man of integrity. In spite of our friendship, he would never reveal information about Shell. He was a big supporter of Corporate Malaysia; his principals would not allow him to reveal information he believed sensitive. However, during the early days of setting up Petronas, Jeff was able to facilitate the Production Sharing Agreements negotiations, by conveying Petronas’ wishes to Shell ahead of meetings. This was instrumental for a much smoother process.” – Tengku Razaleigh Hamzah, founder and executive chairman, Petronas

Losing Dad has made me feel more alive than ever, even though something inside me has died and is gone forever. This grief has lead to my frustration that few knew the things he had done for our community, few will remember him for it, admire and respect him.

But I realise, this is heroism.

“The real heroes ... aren’t the people doing things; the real heroes are the people noticing things, paying attention. The guy who invented the smallpox vaccine didn’t actually invent anything. He just noticed that people with cowpox didn’t get smallpox.” – John Green (The Fault In Our Stars)

Dad was selfless. He had time for everyone – people from all walks of life; anyone, at anytime. It was never about monetary gain or self-acclamation; but about how he could help, you. He made time. He was patient. He listened.

This goes out to all whom Dad touched. You know who you are, you have your story with him and that’s all that matters.

You have made me rethink my life, my future, rethink me. Although we miss you terribly, and the pain remains unrelenting, you continue to inspire. Thank you, Dad.

“To live in the hearts we leave behind is not to die.” – Thomas Campbell

When opposites attract: How much polarisation can love take?
Kampung Baru bubur lambuk makes a return this Ramadan
Starchild: Malaysian children share why they love pencils so much
Former Covid-19 patient cooks any food other Covid patients crave for
Horror in Indonesia: 'Suddenly we heard people scream: Flood!'
Young people in Germany at greater risk of homelessness amid pandemic
Following their passion, women go far to play flag football
In Italy, ballroom dancers twirl through lockdown
A lesson for all: How to tell fake news from genuine news
Not just charts, boyband BTS tops the celebrity cake list too