In the second of six articles in a series on child safety, we look at what must be done when a child goes missing.

WITH social media, spreading news has become all too easy. We have seen friends sharing photographs of a missing child on Facebook and our first instinct is to hit the “Share It” button, for who wouldn’t want to chip in to help find the child as quickly as possible?

“When a child goes missing, parents should refrain from spreading the news on social media. In missing children cases, we always have to ascertain whether the element of kidnapping is involved.

“Sharing a photo of the missing child on Facebook could potentially endanger the child’s life, if he is indeed a victim – you never know what the perpetrator would do to the child when he finds out that everyone is hot on his trail.”

If a child is allegedly missing, the first thing parents should do is enquire about the child’s last known whereabouts from family, friends and neighbours, Hamidah adds.

“We always advise parents to start by looking for their child in frequently visited places. They should also check with their relatives and friends and if there’s still no sign of the child, they should then lodge a police report. Our investigation will begin and we will inform our district control centre to share the information with all our men on the street.

“During this time, we ask only for the parents’ full co-operation; to pass us any information that may contribute to solving the case.”

Once foul play is ruled out, the police can opt to trigger the child kidnapping and missing alert system, National Urgent Response (Nur) Alert. The system aims to spread information as fast as possible to help trace missing children under 12. Since its launch in 2011, Nur Alert has only been activated for 10 missing-child cases. 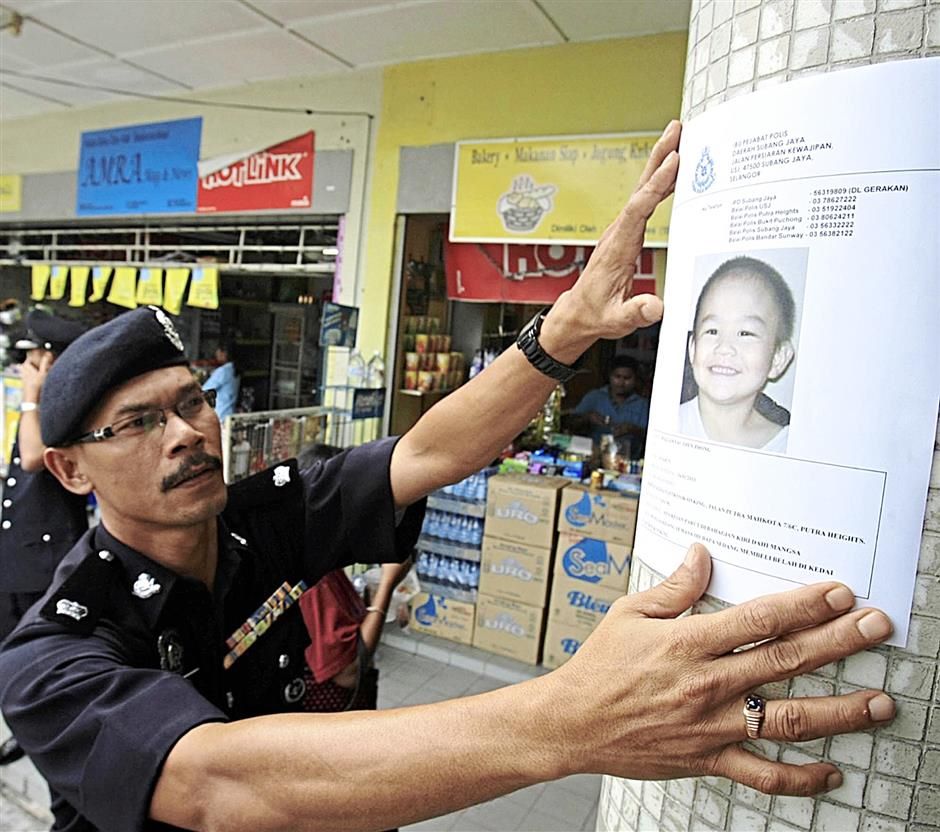 “There have been criticisms as to why the Nur Alert has not been used more often to find a missing child. What needs to be understood is that we have to tread very carefully when a child’s life is at stake.

“Just because we have not triggered the Nur Alert doesn’t mean that we aren’t already doing all that we can to locate a missing child,” Hamidah reveals.

When it comes to triggering the system, the final consent always comes from the parents. And it is only with their consent that the photo of the missing child is allowed to be shared with the media and public.

While photo dissemination is undoubtedly one of the most common ways to go about finding missing children, families should think twice before allowing a photo of their child to go public, suggests programme co-ordinator Vijaya Baskar of Protect and Save the Children, a non-profit association that carries out child safety programmes and focuses on the prevention, intervention and treatment of child sexual abuse.

“Especially in cases when a missing child is believed to be a runaway, parents should refrain from having their child’s picture published in the media.

“An identifying photo can affect the rehabilitation of the child and may even lead to peer bullying in the long run, as the child is now branded under a certain light,” Vijaya explains.

Statistics provided by Malaysian Crime Prevention Foundation vice-chairman Tan Sri Lee Lam Thye at a press conference on missing persons recently revealed that 45% of the cases involved children below 18, with most of them allegedly driven away by domestic pressure or squabbles or girls running away with boyfriends.

“It is unfortunate how missing teens are often branded as runaways. It is actually dangerous to have this mindset as the children could very well have been abducted or trafficked, but nobody is serious about looking for them. This begs an attitude change. Anybody below 18 is a child and they need to be protected,” Vijaya opines.

Once a police report has been lodged, parents should leave the investigation to the authorities instead of participating in any activity that may further compromise the situation, says Protect and Save the Children executive director P. Nagasayee Malathy.

“As a parent, I understand how it feels for those with missing children who just want their child to come back to them as soon as possible.

“But without knowing the full details, every little thing that you do may add more risk to the situation, as in the case of sharing missing children’s photos on Facebook. We should never react when we are under a stressful situation.

“It is always better to go through the proper channel for things like this. All parents can do to speed up the investigation is to keep following up on the case,” she says.

Parents can also contact Childline at 15999, a 24/7 confidential helpline created to serve the best interests of children.

“Childline has contacts with other stakeholders and may also work internally with the police and the department of social affairs to assist in missing children cases. Those who do not feel comfortable about going to the police can consider contacting Childline as a start,” Malathy suggests.

> This Child Safety Awareness campaign is brought to you by RHB Banking Group, in collaboration with The Star. As part of its corporate social responsibility initiative, RHB has been working in partnership with the Royal Malaysia Police since 2007 on ‘Reuniting Families – Missing Children’, a programme that utilises the bank’s existing facilities as an alternative channel of communication to disseminate information and locate missing children. To date, RHB has assisted in four cases of missing children.