Over the weekend, former footballer David Beckham’s candid version of All I Want For Christmas Is You went viral on Instagram. And its original singer, Mariah Carey, has noticed and given her approval.

Beckham, 47, was secretly filmed by his wife, former Spice Girl turned designer Victoria Beckham, 48, while singing along to the festive hit at the kitchen counter.

The video, in which he initially struggled to hit the high notes, garnered 1.3 million “likes” and caught Carey’s attention.

The 52-year-old singer commented: “My new fave rendition” and tagged on the heart and Christmas tree emojis.

David Beckham ended the video by hitting a high note, after teasing his wife that she, too, would have struggled to match Carey’s legendary vocal range.

Carey released All I Want for Christmas Is You in 1994 as the lead single from her festive album Merry Christmas.

The song has since become a festive staple and a 2016 study by The Economist suggested that she makes as much as US$2.5mil from it every year. – The Straits Times/Asia News Network 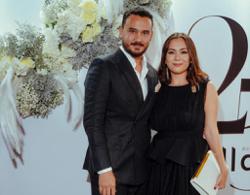