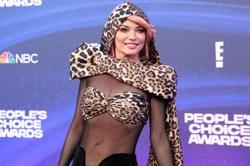 Shania Twain says the abuse she suffered made her struggle with her body image. Photo: AP

Country singer Shania Twain recently opened up about the abuse she endured throughout her childhood and how it affected her body image.

In an interview with The Sunday Times, the 57-year-old star revealed she would "flatten her boobs" to defend herself against the physical and sexual abuse from her late stepfather, Jerry Twain.

"I hid myself and I would flatten my boobs. I would wear bras that were too small for me, and I'd wear two, play it down until there was nothing 'girl' about me. Make it easier to go unnoticed. Because oh my gosh, it was terrible – you didn't want to be a girl in my house," Shania said.

The Man! I Feel Like A Woman hitmaker shared that she would also engage in physical fights whenever her stepfather abused her and her mother.

"I once threw a chair at my stepfather. I think a lot of that was anger, not courage. And it took a long time to manage that anger," the Grammy-winning artiste said.

Jerry adopted Shania, along with her two sisters, when she was four years old. He and Shania’s mother, Sharon, died in a car accident in 1987.

Although Shania no longer suffers at the hands of her stepfather, the abuse she went through was detrimental to her body image.

"All of a sudden it was like, well, what’s your problem? You know, you’re a woman and you have this beautiful body? What was so natural for other people was so scary for me," she explained.

The singer revealed that she only began embracing her femininity and "appreciating" her body in her mid-20s after signing a recording contract.

"By the time I had my record contracts I was the kind of woman that ... when I walked in the room, it's like, don't even get any closer. It was clear in my body language. I think maybe what young girls can learn too is to exude that confidence," she said.