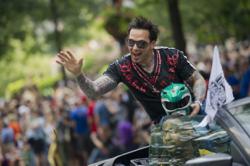 The 32-year-old actress is reported to be still in ICU but shows improvement. Photo: Nad Zainal/Instagram

Malaysian actress Nad Zainal who is still in Intensive Care Unit (ICU) at a hospital in Selangor is showing improvement, reported mStar, The Star’s Malay-language portal.

The update comes a day after reports of the star being in critical condition and was put under induced coma.

According to mStar, Suria FM deejay Sharifah Shahirah shared a message from Nad’s mother on her Instagram. Sharifah said that the doctor informed Nad’s mother that she's doing better today compared to yesterday.

“Nad’s mum said Nad will be examined by a kidney disease doctor as her kidney is now affected,” added Sharifah.

mStar highlighted that many Malaysian artistes have visited Nad at the hospital after learning of her condition.

Nad was taken to the hospital a few days ago after she complained about pain in her chest and shortness of breath. It was believed to be lung infection. Upon further examination, the doctors found blood in her lungs. That's when her condition took a turn for the worse.

“The doctor cleared the lungs of the fluid. Though her oxygen level did dip,” actor Ungku Ismail told mStar.

“Thankfully Nad is strong, because her heartbeat and blood pressure remained OK. Doctors are optimistic that she can beat this thing.”

Another news portal also quoted Nad’s father saying: “Her oxygen level increased from 78% to 91% as of last night. But her condition remains critical. I hope everyone can pray for her well-being and for her to make a full recovery soon.”