He is the third rapper to be fatally shot in Los Angeles County in less than a month’s time.

A search was underway in California on Wednesday (Oct 6) for the gunman wanted for killing Half Ounce, the third rapper to be fatally shot in Los Angeles County in less than a month.

Half Ounce, whose real name is Latauriisha O’Brien, was found shot to death on Monday in the city’s Koreatown neighborhood, Los Angeles Police said Tuesday. He had been walking home with a friend when they were approached by a dark SUV and a passenger suddenly opened fire on them from inside the vehicle, sources told Fox 11.

The 32-year-old rapper was still on the phone with his pregnant wife as the gunfire erupted. Police said she heard the violence unfold.

Authorities “responded to numerous radio calls of shots fired, with a man screaming” around 11.30pm. When they arrived at the site of the shooting, they discovered Half Ounce wounded outside an apartment building. He was pronounced dead on the scene, police said.

He was a father to two sons, aged nine months and two years old, as well as an eight-year-old daughter, and relatives also told NBC4 that his fourth child is due in March of next year.

O’Brien’s friend reportedly fled the scene amid the gunfire and authorities are still working to track that person down. Officers are also on the hunt for the suspected shooter, who sped south following the fatal confrontation. He has not been identified.

Half Ounce’s death marked the third fatal shooting involving a rapper in Los Angeles County over the last few weeks.

On Sept 12, rapper PnB Rock, whose real name was Rakim Allen, was fatally gunned down during a botched robbery inside Roscoe’s House of Chicken & Waffles in South Los Angeles. Authorities said the suspect was after his jewelry at the time.

Just more than two weeks later, Kee Riches, 23, whose real name was Kian Nellum, was shot and killed in Compton along with 29-year-old Robert Leflore Jr. 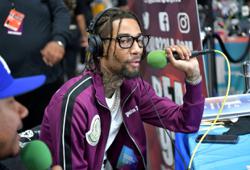