Kang Tae-oh gives fans a sneak peek of what he would look like as a soldier. Photo: Kang Tae-oh/Instagram

South Korean actor Kang Tae-oh, whose mandatory military service started on Tuesday (Sept 20), has given fans a sneak peek of what he would look like as a soldier.

On Monday, the star of the hit Korean drama Extraordinary Attorney Woo (2022) shared on social media four photos of his military-ready hairstyle before he enlisted.

“Thank you for the love and support,” he wrote in Korean. “I will be back soon.”

In one photo, Kang, 28, is seen touching his buzz cut with both hands, seemingly still not used to his new do.

Choi, who co-starred with Kang in the television series Run On (2020 to 2021), wrote, “See you, Chestnut”, referring to a person with short hair.

According to the South Korean media, Kang will attend a three-week basic military training course at a camp in Jeungpyeong County in North Chungcheong Province. He is scheduled to complete his military service in March 2024.

Kang made his acting debut in the Web series After School: Lucky Or Not (2013) before he rose to prominence in historical drama The Tale Of Nokdu (2019) and Web series My First First Love (2019).

His recent portrayal of Lee Joon-ho, a member of the litigation team in Extraordinary Attorney Woo, won the hearts of viewers.

He and lead actress Park Eun-bin, who plays the titular autistic lawyer and his love interest, shared plenty of on-screen chemistry. – The Straits Times/Asia News Network 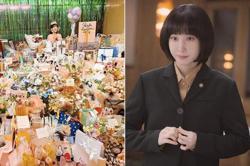