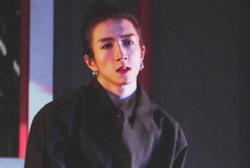 Dancer Lee Kai Yin was critically injured during a concert when a giant screen crashed down on stage. Photo: Lee Kai Yin/Instagram

Dancer Lee Kai Yin, who was critically injured during a concert by boy band Mirror when a giant screen crashed down on stage, faces months in hospital and may be paralysed from the neck down.

According to an exclusive report from Hong Kong newspaper South China Morning Post, which quoted an insider source, the 27-year-old has had three operations since the accident on July 28.

A two-part neck surgery was performed to decompress and stabilise two sections of his cervical spine and a tracheotomy was done to create an artificial airway to help him breathe.

The source also said his recovery is likely to be slow and he will have to remain in hospital for at least nine months. He will also likely need considerable help in his daily life after being discharged.

His father, Derek Lee Shing Lam, said in a social media post on Sunday (Aug 14) that his son has managed to communicate with his loved ones despite temporarily losing his ability to speak due to the trachea operation. He is currently on a ventilator.

Derek Lee, a Baptist pastor who migrated to Canada, returned to Hong Kong with his wife to be by their son's side after the accident.

In his post, he asked for "more space" to deal with his son's treatment, adding that the family will not be making any more public statements.

He also thanked the medical team for taking care of his son and Lee's girlfriend Natalie So for her support.

He wrote: "In the midst of great tribulation, we especially sense the value of family affection and the truth of faith. Every time everyone held hands in prayer, the warmth and presence was indeed extremely precious." – The Straits Times/Asia News Network