Hong Kong superstar Aaron Kwok (left) shared a picture on Instagram celebrating the birthday of his wife Moka Fang (centre), with his two daughters and his in-laws. Photo: Aaron Kwok/Instagram

Hong Kong superstar Aaron Kwok and Chinese model Moka Fang have never been shy to publicly show their affection for each other on special occasions since their marriage in 2017.

Kwok wrote in Chinese on Instagram and Weibo on Friday night: "Wishing my dear wife a happy birthday, good health and may all your wishes come true."

He shared four photos on social media, including one of him with Fang and one of a huge bouquet of 99 roses.

In a rare instance, his parents-in-law made an appearance in the fourth photo, together with Kwok, Fang and their two daughters - Chantelle, who turns five in September, and Charlotte, three.

He is slated to appear in several upcoming movies, including The White Storm 3 and Where The Wind Blows. – The Straits Times/Asia News Network 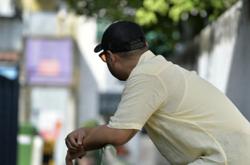