A Bollywood remake of the 1994 classic Forrest Gump, Laal Singh Chaddha, is facing calls for a boycott.

The upcoming film, to be released on Aug 11, has been in the making for years and is highly anticipated.

It features Bollywood superstar Aamir Khan in the titular role made iconic by Tom Hanks, who won an Oscar for his portrayal of a slow-witted and endearing man who unwittingly influenced historical events.

However, Khan has come under fire on social media over a remark he made in 2015 about not feeling safe in India.

Calls for the movie to be boycotted, with the hashtag #BoycottLaalSinghChadda, have been trending on Twitter as its release date approaches.

Khan, 57, addressed the backlash, saying to the Press Trust Of India earlier this week: "I really love the country. That's how I am. It is rather unfortunate if some people feel that way. I want to assure everyone that it's not the case, so please don't boycott my films, please watch my films."

Other critics on social media pointed to his 2014 hit, PK, about an alien who had landed on Earth on a research mission.

There was a controversy regarding certain scenes in the movie which were said to have hurt religious sentiments and pro-Hindu activists had vandalised some cinemas screening the movie.

Still others said that the wide-eyed and innocent protagonist in PK was too similar to Laal Singh Chaddha, calling Khan unoriginal.

The plot of the remake, also starring Kareena Kapoor Khan, will feature a few notable changes from the Oscar-winning film, such as weaving in key chapters of India's history.

Unlike in the original, there will be be no sex scenes in the reboot.

"Laal Singh Chaddha is majorly inspired by the original, Forrest Gump. However, we have made some changes to suit the sensibilities of the Indian audiences. The Hollywood film had a few adult scenes, we did not take those in our film. We want that people watch our film with their entire families," Aamir Khan said in an interview with Bollywood entertainment site Koimoi.

Khan also mentioned in an interview with BBC that the remake had changed the iconic bench at a bus stop, where Gump sat and regaled strangers with his life story, to a seat on the train.

He revealed that the classic line, "Life is like a box of chocolates", was adapted to refer to a popular Indian street food, golgrappa. – The Straits Times/Asia News Network 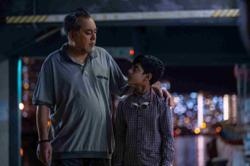