Looks like there is no stopping Syamsul Yusof’s film Mat Kilau: Kebangkitan Pahlawan.

The movie which opened on June 23 has grossed RM90mil at box office in just over a month across Malaysia, Singapore and Brunei.

Since its premiere, Mat Kilau has remained at the top of local movie listing for five weeks in a row despite recent Hollywood releases including Jurassic World Dominion and Minions: The Rise Of Gru.

His latest has long surpassed the record set by Syamsul with his 2018 horror movie Munafik 2, which grossed RM48mil across the region.

Domestically, as of Sunday (July 24), the historical drama has collected RM84mil.

At the moment, the No.1 film of all time in Malaysia is the 2019 film Avengers: Endgame which earned RM87mil in Malaysia.

It's highly likely Syamsul's film can take over the top position from the Marvel movie as cinemas around Malaysia are showing Mat Kilau in full force.

“Mat Kilau is still showing at cinemas now, and it’s still going strong. As long as there are audiences, the film will continue to show on the big screen,” Syamsul told a news portal.

The 38-year-old filmmaker also took to Instagram to share the film’s success and say thank you to the viewers.

He wrote in the caption: “My team and I are truly touched with just how much support we have been receiving from the audiences for Mat Kilau.

“I am grateful for their trust in my work, not only with this film but all the films I have done previously. I hope to gain their trust for all my future work too.

“We have proven that Malay film can do well at local cinemas. Let’s work together to grow the local film industry even further.”

Syamsul is currently working on the third film to his KL Gangster series which began in 2011 and earned him his second best director trophy from Malaysia Film Festival.

His first was for his 2010 actioner Evolusi KL Drift 2.

He told StarLifestyle in June: "Mat Kilau is not going my last historical film. I am planning on making another one. But I have to make KL Gangster 3 first because I made a promise I would tackle that first.

"And yes, Munafik 3 as well. The thing is, I only have two hands and there's only so much I can do. I really have to see which of my movies I can do first."

He concluded with a laugh: "I will make them one by one." 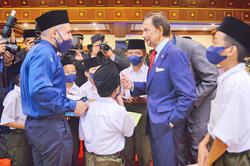