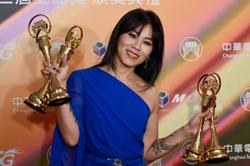 Chua, whose first album was the English-language Bored in 1997 and whose breakthrough Mandarin record was Tanya in 1999, won album of the year for Depart, as well as best Mandarin album, best Mandarin female singer and best vocal album recording.

At the ceremony late on Saturday (July 2), Chua expressed some astonishment that more than two decades after her debut, people were still enjoying her music.

"To be honest I think that I have been singing for many years. I am very afraid that people get bored of it," she said at the ceremony in the southern Taiwanese city of Kaohsiung, having brought her mother as her plus one.

In a surprise, Chinese rocker Cui Jian, whose song Nothing To My Name became an anthem to student protesters in Beijing's Tiananmen Square in 1989, won for best Mandarin male singer. He was not there in person and had a message of thanks read out for him on stage.

While Taiwan has only 23 million people, its music scene has an outsized influence in the Chinese-speaking world, not only in China but amongst the diaspora, in part due to creativity unhindered by censorship.

The Golden Melody Awards celebrate not only Mandopop but also artistes singing in Taiwanese - also known as Hokkien - Hakka and indigenous languages, a visible sign of the government's efforts to promote tongues other than Mandarin.

Song of the year went to the Taiwanese-language Oh Love, You Are Much Greater Than I Imagined by the band EggPlantEgg.

Best indigenous singer was won by 83-year-old Osay Hongay, an ethnic Amis from Taiwan's eastern county of Hualien. She gave her acceptance speech in her native language, which was translated for her into Mandarin. – Reuters