The song is featured in the season premiere as Max Mayfield (Sadie Sink) plays it on her Walkman as she strolls the hallways of high school. – Photo: Twitter/@NetflixGeeked

Stranger Things have happened than a song trending at the top of music charts nearly 40 years after its release.

Netflix series Stranger Things propelled Kate Bush's 1985 hit Running Up That Hill (Deal With God) to the top of charts after the season four premiere on Friday.

Over the weekend, Running Up That Hill managed to make its way to the No. 1 spot on iTunes, according to Deadline and the Los Angeles Times.

The song is featured in the season premiere as Max Mayfield (Sadie Sink) plays it on her Walkman as she strolls the hallways of high school. A few episodes later, it plays as Max faces a major struggle.

Running Up That Hill peaked at 30 on the Billboard Hot 100 when it was first released. The song got another resurgence in 2020 when Meg Meyers' cover brought it to the No. 1 spot on the Billboard's Rock Airplay chart.

Stranger Things star Winona Ryder pushed for the inclusion of Bush's music, she told USA Today ahead of the season four premiere.

"I've been obsessed with her since I was a little girl," she told USA Today. "I've also for the last seven years been dropping hints on set wearing my Kate Bush T-shirts."

Ryder referred to Bush as "a hero of mine" for being a comfort to her in school. – USA Today/Tribune News Service

Actress Millie Bobby Brown on being sexualised at a young age: ‘It’s gross and it’s true’

10 most popular secret filming locations from your favourite TV shows 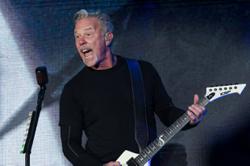