Lea Michele posted a photo of her son Ever as a baby with her husband, American businessman Zandy Reich. Photos: Lea Michele/Instagram

American actress Lea Michele has shared a photo of the face of her son Ever on Instagram for the first time.

To the delight of her 6.9 million followers on the social media platform, the Glee star posted an adorable photo of Ever as a baby with her husband, American businessman Zandy Reich, 39, on Sunday (Jan 23).

"Greatest man, father, husband and friend. I wake up every day so thankful that you are ours, Z. Happy birthday. Ever and I love you so much," Lea, 35, wrote, ending with a heart emoji.

The couple, who tied the knot in an intimate ceremony in March 2019, had their baby in August 2020 in the middle of the Covid-19 pandemic, but had always concealed his face on social media.

She spoke to entertainment site ET in November 2021 about her difficult pregnancy.

"I had a really intense pregnancy, I had a very intense journey of trying to get pregnant. We were pregnant during a pandemic dealing with those complications," she said.

She revealed that she suffered from polycystic ovary syndrome, a hormonal disorder common among women of a reproductive age, and had multiple surgical operations and procedures. There were concerns that, as a result, they wouldn't be able to have a child.

"We had given up a little bit, my husband and I," she said. "But they say when you give up and when you stop trying is when these little miracles happen."

She added: "And then my son was born, we were in quarantine for almost a year together with him, so it's been pretty wild. We're just now starting to get back into the swing of life again." – The Straits Times/Asia News Network 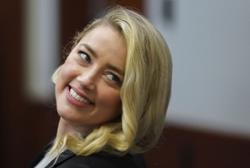