The seven members of the K-pop group BTS launched their own personal accounts on Monday (Dec 6).

Verified by Instagram, the members quickly gained 1 million followers each in under an hour. Naturally, the number is only increasing by the minute.

BTS fans got wind of the new accounts when its official group account (@bts.bighitofficial) suddenly followed more people. Each member posted at least a photo on their respective accounts and they are all following seven other accounts – six of which are their fellow bandmates. This move comes after the group’s company – Big Hit Music – released an official statement that the group will be taking an extended break.

According to a report, this would be the first time the members will be spending the holidays with their families since their debut.

The septet was in the United States where it headlined four nights at Los Angeles, California’s SoFi Stadium, between Nov 27 to Dec 2.

US music magazine Billboard wrote that the group sold an 214,000 tickets to fans who travelled to the city from not just across the United States, but the entire world and in the process scored the second-biggest ticket grosses for a single concert event in US history.

Three of its members returned to South Korea on Monday and entered a 10-day self-quarantine.

Four other members – RM, Suga, V and J-hope – are reportedly still in the US.

Even after a blockbuster year, BTS scores only one Grammy nomination 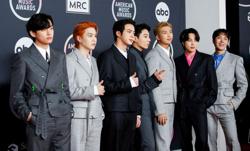