The group hopes that the LA concerts become the start of its new journey, returning to normal, and hinted there may be more in-person concerts to follow. Photo: BTS/Twitter

K-pop sensation BTS conducted a global press conference at SoFi Stadium in Los Angeles on Sunday (Nov 28), after opening the curtains to the Permission To Dance On Stage concert series the previous night.

The seven bandmates - RM, V, Jimin, Suga, Jungkook, Jin and J-Hope - shared their emotions and thoughts after reuniting with their global fans, known collectively as Army, in person for the first time in two years, and shared plans for the future.

“For the past two years, ‘ordinary’ and ‘normal’ were no longer normal, so it was a very sad and difficult time for everybody. We really looked forward to this concert and are really excited to be here and hope that we can impart some positive energy to all Army here,” V said, opening the event.

On the first of the four-day concert series Saturday, the bandmates were overwhelmed with emotions in finally standing in the same area with their fans.

“Seeing the stadium filled with all the fans got me really emotional, beyond words,” RM said.

“We were very nervous, and because we’ve been away from live performances for a long time, we were afraid that we might make a mistake. So we practiced much harder and longer than usual. But funnily, no one cried yesterday,” Jin said, laughing.

Two full years have passed without concerts, and the band has been working even harder to meet fans’ expectations.

“For the past two years, we felt powerless and were depressed. We tried to break out of that by doing what we could, releasing our songs Dynamite and Butter, album Be and Permission To Dance,” Jimin said.

“This year we created and released songs that tried to express our frustrations as authentically as possible and about the thought and consolation that we hoped to give,” Jungkook said. “The fact that we received so much love for these songs that we’ve created gave us a lot of energy, and we hope we can pour in this positive energy that we’ve received in doing the concerts.”

A few days ahead of the event, the septet was nominated for a second time for a Grammy, for megahit Butter in the best pop duo or group performance category. Last year, the group received its first Grammy nomination, but failed to grab the win.

“We feel excited and it still feels unreal,” Suga said. “Grammys are something that I grew up watching. Being nominated for a Grammy and getting the final win isn’t easy and I’m thankful there are still barriers and challenges we can try to work to overcome. We hope that we can overcome them.”

RM said: “We had countless shows and awards, but the recent artiste of the year at the AMAs and the second Grammy nomination were truly something and really did mean something for us.”

On Nov 21, the group won the artiste of the year award at this year’s American Music Awards ceremony, becoming the first Asian act to do so. The group also won for favourite pop duo or group and favorite pop song for Butter. 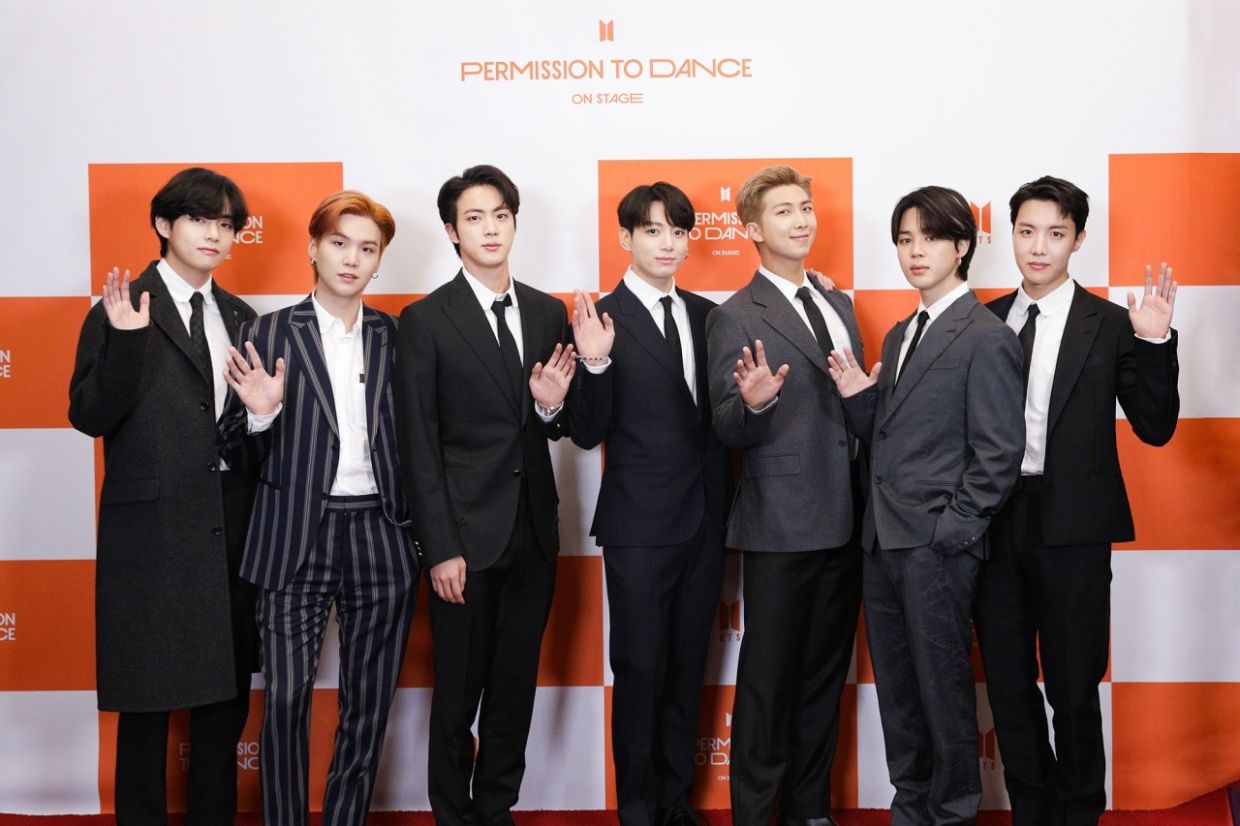 The members of BTS pose for pictures at the global conference conducted Sunday (Nov 28) at SoFi Stadium in Los Angeles. Photo: Handout

RM, also the group’s leader, continued: “As an artiste, we started out in Korea. The limitations of our identity, language, genre and the invisible walls, we felt like they really existed. But every moment we tried to give our best, with all of our hearts, and I think each of those small moments truly made today’s miracle for us.”

The group hoped that the LA concerts become the start of its new journey, returning to normal, and hinted there may be more in-person concerts to follow.

“I hope that this will be the first of a series to see our Army and hold concerts. We will continue to have concerts in Korea after this one and are planning another in Korea, so please look forward to them,” he said.

Throughout the event, the band expressed infinite gratitude and love for fans.

“It’s always the cheering from Army that always give us strength,” Suga said. “Hearing their voices and shouts, and seeing their actions, gestures and expressions, although we couldn’t see the expressions under the masks, we once again felt that they are the reason why we’re able to have this and able to live our lives.”

BTS held the second concert Sunday evening, and will hold the next two on Wednesday and Thursday.

The septet will stay in the states next month to join the nation’s biggest end-year tour, the iHeartRadio Jingle Ball. – The Korea Herald/Asia News Network