Actor Kim Seon-ho admits to coercing ex-girlfriend into getting an abortion. Photo: Handout

Korean actor Kim Seon-ho has released an apology letter to his ex-girlfriend following the abortion scandal.

The ex-girlfriend had written via an anonymous post on an online community site on Sunday (Oct 17) alleging that an “actor K” had demanded she terminate her pregnancy when they were dating in 2020.

She further alleged that the actor had behaved differently towards her after the abortion.

In the letter, he stated that he started the relationship with the person “with good feelings and intentions”.

He wrote: "However, during the relationship, I hurt this person due to my carelessness and lack of consideration.

“I had hoped to meet with her again and apologise to her directly, but I am currently unable to do so and am waiting for the moment when I can do so. For now, I would like to genuinely apologise to her through this statement.”

The 35-year-old also apologised to everyone who had supported him, as well as to his co-stars and various productions he had worked on, for causing them harm.

“It was all thanks to those who supported me that I was able to become the actor Kim Seon-ho, but I had forgotten that.”

He ended the apology letter with: “I am aware that this rambling will not fully reach your hearts, but I am still attempting to convey my sincere thoughts. I am very sorry.”

The K-drama Hometown Cha-Cha-Cha – available on Netflix – ended its run on Oct 17.

Kim was originally scheduled to appear in a press conference on Wednesday (Oct 20) following the conclusion of the series. His interviews with the press have now been cancelled, reported one media.

As previously reported, advertisements featuring Kim were taken down following the controversy.

The actor is also confirmed to be leaving the season four of variety show 2 Days & 1 Night.

A statement from the series' production team stated that Kim's scenes will be edited out of filmed footage "to reduce the discomfort felt by viewers". 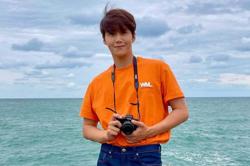