How Marvel Studios’ Shang-Chi And The Legend Of The Ten Rings pulled off the rare feat of being an excellent Hollywood kung fu movie while being part of a superhero franchise. – Photos: Walt Disney Company Malaysia

As if the pressures of making a movie set in the hugely successful Marvel Cinematic Universe (MCU) wasn’t hard enough, the makers of Marvel Studios’ Shang-Chi And The Legend Of The Ten Rings also had to contend with the fact that they were making the first ever fully Asian superhero movie based on a character that had a troubled history as well.

Happily, director Destin Daniel Cretton and his co-writers Dave Callaham and Andrew Lanham managed to pull off what is not only another hugely entertaining entry into the MCU, but also a standalone Hollywood kung fu movie that elevates the genre above its past racist and stereotypical tropes.

The movie revolves around Marvel Comics character Shang-Chi played by Simu Liu. The character itself made his debut in Special Marvel Edition #15 back in 1973, created by writer Steve Englehart and artist Jim Starlin.

The character proved to be a hit, and Shang-Chi was soon given his own solo title, Master Of Kung Fu.

At the time, however, Shang-Chi’s origin story made him the son of Fu Manchu, a villain that was based on a somewhat racist Asian stereotype.

Thankfully, efforts have been made to distance Shang-Chi away from this controversial past, with the character even becoming an Avenger in the comic books.

Simu Liu as Shang-Chi, whose name roughly translates to “rising of the spirit”.

With the new movie, Shang-Chi, whose name roughly translates to “rising of the spirit”, is given a much better update.

He is now the son of Wenwu (played by Hong Kong screen legend Tony Leung Chiu Wai), the leader of an international criminal organisation called the Ten Rings (named for the 10 magical rings he wears around his wrists), who comes looking for his estranged son and daughter Xialing (Meng’er Zhang), in order to help him with his search for a mythical village called Ta Lo.

During a recent one-on-one video interview from Los Angeles, California, Cretton explained that the one thing he did not want in Shang-Chi was anything that would further the Asian stereotypes that have been perpetuated throughout cinema.

“We wanted to make sure the characters were ones that you have never seen before, and update them to feel like global citizens who are not only connected to their (ancestral) roots, but who are also very much modern young people who are connected to everything that the new generation of kids are now connected to,” said the Hawaii-born director, whose mother is Japanese-American and father has Irish and Slovak ancestry. 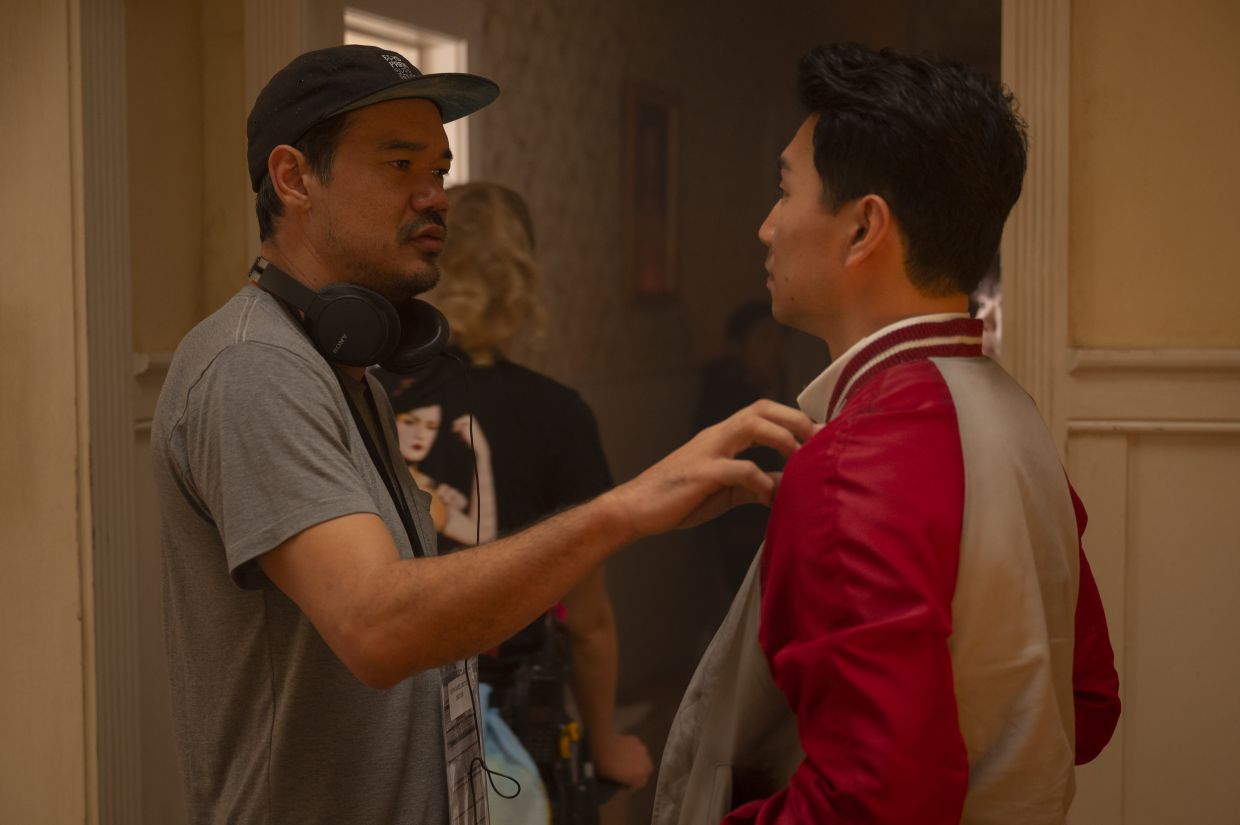 “It came fairly naturally. Once the characters came alive and we knew what the story was going to be, it was fairly easy to know the tone of the movie and what we should be exploring in the film,” he explained.

“We concentrated the story on the emotions of this family that had been broken apart and watch them learn how to come back together again.”

It also helped that the director could call upon the likes of Leung and Yeoh as well.

“Anybody who knows cinema and went to film school is obsessed with Tony Leung! He was my No.1 choice for this role, and I honestly didn’t think he would ever go for it!” Cretton recalled.

“We had to make sure this character wasn’t a stereotype and was interesting enough for an actor like Tony to play.”

Liu (left) praised Yeoh for being an “elegant and graceful” martial artist.

In a separate interview, Liu described acting opposite Leung and Yeoh as one of the greatest experiences of his life.

Before Shang-Chi, the 32-year-old Chinese-Canadian actor was best known for his role as Jung Kim in popular Canadian TV series Kim’s Convenience. He reportedly did most of the stunts for the movie himself.

Shang-Chi being his first major screen role, he was understandably nervous about acting opposite these two legends.

“I had an expectation that Michelle would be very tough and intimidating, so I was honestly a little nervous when I first met her,” he said.

“I’d heard she likes wine, so I got her a bottle, and went up to her, and said, ‘Hello, Michelle. It is such an honour to work with you’. Then she literally just wrapped me up in a big hug and said ‘We’re going to have such a great time together!’

“That’s Michelle in a nutshell – she makes everyone so loved and included. She is such a wonderful spirit to be on set with – friendly, kind, goofy... she radiates amazing positive energy and lights up every single room that she is in.”

He also praised her for being an “elegant and graceful” martial artist.

“The one thing she told me all the time was to loosen up. Because I was the new guy and wanted to prove myself, I went at (the action sequences) hard. But she always said, loosen up!”

Liu expected Yeoh to be 'very tough and intimidating' but instead, she was 'kind and goofy'.

Acting opposite Leung was another matter, as Liu recalled just how “phenomenal” the Hong Kong actor is.

“What Tony does better than so many performers that I have seen is just having a sense of stillness.

“It seems like he can communicate so much with just a look,” he explained.

“He doesn’t have to do too much or throw his body around, because it is so subtle. You can tell a whole story with just his eyes, and I really admired him for that.

“Acting opposite him and feeling the weight of his gaze and eyes on mine was really quite powerful. He drew me in and we connected instantly. He is just a phenomenal performer.

“At the same time, he is not like what you’d expect for someone of his stature. He is so wonderfully down to earth and gentle and kind.”

With Marvel going headlong into the idea of a multiverse, all bets are off, and every MCU character could meet one another at any point. In the comics, Shang-Chi has ties with numerous superheroes, even training Spider-Man in kung fu at one point and becoming a member of the Avengers.

So, which Marvel superhero does Liu hope to meet in the future?

“My favourite movie in the MCU is probably Thor Ragnarok, so make of that what you will. But I love the whole universe – I’m not picky, I’m just happy to be here, so I’ll take any cameo they give me!” he said with a laugh.

Marvel Studios’ Shang-Chi And The Legend Of The Ten Rings is now showing at cinemas nationwide.