KRU Entertainment, the company started by Datuk Norman Abdul Halim and his two younger brothers – Edry and Yusry – has been around for almost 30 years now, expanding into various subsections of the entertainment field.

Presently, KRU Entertainment (which deals with domestic market) is the parent company of five subsidiaries including KRU Academy, KRU Studios and KRU Music.

Its sister company KRU International takes on all the overseas matters. Both these establishments are housed under KRU Corp.

Although it would stand to reason that KRU Corp has a solid footing in the entertainment business, Norman – the president and CEO of KRU Group Of Companies – tells StarLifestyle exclusively that the company is changing how it does things to adapt to the current state.

“Covid-19 has really humbled us,” says Norman. “This whole situation has truly tested us on our ability to sustain. I think we survived that phase, managing to overcome certain challenges last year, because we adapted.”

He reports that he didn’t have to terminate any of the staff, excluding those who decided to leave on their own accord.

“But we did cut down a lot of our expenses, even relocating to Cyberjaya as part of that cost-cutting measure.

“The fact that we had to go back to square one, I think allowed KRU Corp to have an even sturdier foundation for the company to grow in the future.

“We realised that whatever it is, we just need to change in order to not become a dinosaur.” One of the changes he mentions to StarLifestyle has to do with KRU Academy.

Norman shares that his business model for the academy is that of modern marketplaces, where a commission is charged for each transaction – think Amazon, Grab and Spotify.

Not conducting classes in the traditional academy setting will allow KRU Academy to penetrate into other countries, he states.

“One day, who knows, KRU Academy might have a lecturer based in the United States who’s doing an online training of a student who is in Australia.”

He adds: “We’re changing how we work in our education, music and animation departments.

“With film, we’re looking at how to promote the intellectual property (IP) when we produce a new movie. Basically, we’re changing certain elements of how we operate and run the show.”

Currently KRU International, under the brand of Kartun Studios, is working on the animated feature titled Zan Orangutan, which began production in 2015.

However, sometime in 2018, after getting feedback from its international licensees and distributors, Norman decided to scrap whatever that were already done and start again.

The production on Zan Orangutan was halted for two years before it resumed. And this time with Norman attached as the director, marking his first time behind camera.

He notes that he realised something was lacking in their animation films that needed to be rectified. One of the films produced by KRU is 'Wheely'. Photo: KRU

These two features were produced by KRU Entertainment and released under the brand Kartun Studios, with special effects done by Prodigital Lab – an animation, visual effects and post-production studio, initially a small division under KRU Studios.

“We did well internationally with Ribbit and Wheely, (earning) about US$1.5mil each in terms of sales, having sold the movies to some 80-100 countries around the world.

“Ribbit even went to No. 3 in Poland on the first week of its release.

“But, we have not been successful in Malaysia. Mainly because the animation characters we introduce tend to come in very late in terms of marketing as we don’t have a TV series to back us up, unlike Upin & Ipin, BoBoiBoy and Ejen Ali which have years of traction on television.”

KRU’s animated films earned roughly RM1mil to RM1.5mil each at the Malaysian box office, which Norman says is very little in the larger scheme of things. Furthermore, the budget of each film is RM8mil to RM10mil.

“Yes, we can break even with TV licensing and the rebate Finas offers, but the prospect of animation film is so much bigger.” Hence the revamp of Zan Orangutan is an attempt to try and broaden its scope and appeal, both internationally and locally.

“We decided, OK, there’s some fundamental changes that we need to make. Not only to the character design, but also the story. And, more importantly, how we promote it as well.

“We have realised the shortfalls and shortcomings from our end... the areas that we need to improve on. We hope that Zan Orangutan will actually open a new era for us,” he says.

The script for Zan Orangutan has changed so many times that Norman says he has lost count. But it was crucial for the production to start with a good script before doing anything further.

Norman believes getting the script right is half the battle won in getting audiences.

“This film is probably one of the most challenging projects we have undertaken,” he adds.

The design of the five main characters in Zan Orangutan, Norman shares, was developed by American animator Craig Kellman (Batman: The Animated Series and TeenV).

When StarLifestyle visited the studio in Cyberjaya recently, a number of animators were in the midst of designing and colouring various scenes from the film. Norman is looking at releasing the feature in the later part of next year.

He elaborates: “We have figured out how to make Zan unique and special.

“The film is Zan’s adventure from growing up with human and being a superstar, to how he finally learns to be a true orangutan again.” Roti is one of the characters that Zan meets at the jungle in the upcoming film 'Zan Orangutan'. Photo: KRU International

What Norman truly loves about animation is its flexibility, which is why he chose to make his directorial debut in this format rather than live-action movie.

He says, not only can an animation travel freely – with different countries easily doing the dubbing to their own languages – but how tiny things can be adjusted to suit different markets or what he calls “enhancing the export properties of a feature film”.

Norman explains: “For example, the first eight minutes of the film takes place in a city. That city can be changed to any city in the world.

“Let’s say we want to sell to China, we can establish the city to be Beijing or Shanghai. Later, when Zan travels to the jungle, that can be universal, as the journey of Zan rediscovering himself as an orangutan will be happening inside a tropical rainforest.”

Translating the script from Malay to English also proved to be an exciting challenge for Norman who confesses he’s always enjoyed writing, having done a lot of songwriting in his musical career and being involved in the creative process of some 20 live-action films that the company’s film division has produced.

“It cannot be a direct translation,” notes Norman of the dialogue.

“Some humour just won’t work if it’s translated word for word. So, we have to come up with a different kind of dialogue. It’s interesting work.”

But on how to achieve the company’s “international ambition”, and at the same time, appeal more locally was another thing Norman seriously focused on as well.

“Producing series was out of the question, because it’s too costly and time consuming. And we can’t churn out IP as fast as we want to.” The KRU brothers started out in the entertainment industry as a musical group. Norman (left) with his younger brothers, Yusry and Edry. Photo: Izzrafiq Alias/The Star

Going back to the drawing board, he thought about the company’s key strength.

Norman and his two younger brothers broke into the entertainment scene in the 1990s as the musical group KRU.

“Music is how we started and how the company started,” says Norman. “That’s where our solution lies as well.”

As it happened, Kartun Studios had been producing animated shorts using popular nursery rhymes for a number of years. Then in 2019, the content on its YouTube channel began to get attention.

“Kartun is KRU’s brand for ‘Made For Kids content’, hence why it is spelt that way with K, R and U letters in the word Kartun.”

Kartun Studios’ YouTube channel posted its first video in 2015. This month, Norman shares, the channel has crossed over the 1 million subscribers milestone.

“Our highest views so far (279 million) is for the ABC Song featuring characters from our first film, Ribbit.”

Another of its most popular video – featuring the characters MooMoo & The Barn House Family with the classic nursery rhyme Old MacDonald Had A Farm – has gotten 126 million views at last count.

The channel also features other nursery rhymes animation videos including Twinkle Twinkle Little Star and Wheels On The Bus with Ribbit and Friends. 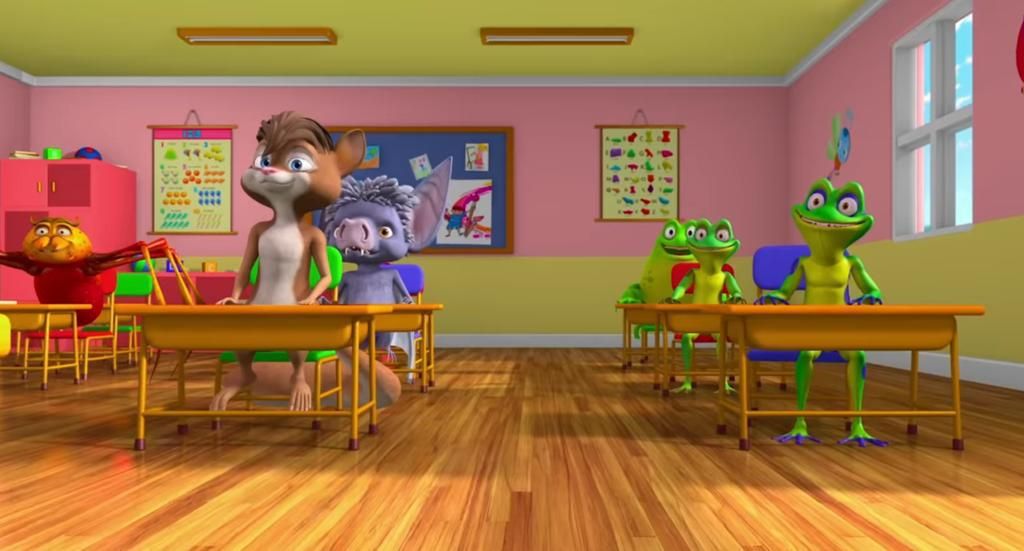 “We started to see a lot of traction overseas (for the videos) like from the United States, Brazil and India... Because our subscriber base keeps growing every day, we want to develop more content like original songs for the kids.

One plan Norman has in mind is to do shorts centring on three baby orangutans that will appear in Zan Orangutan.

“We want to produce music videos with the three young orangutans before the movie is released.

“That way, we can promote these characters ahead of time and hopefully by the time we release the movie, people are familiar with the characters.

“Our strategy is to introduce Zan Orangutan characters through this channel first which has subscribers in over 200 countries.”

During this interview, he divulges that he might want to do a documentary on orangutans to round up the Zan Orangutan experience, in line with “keeping everything linked”.

If the character of Zan does well, Norman is confident the company could look forward to a yearly release of animated products.

“It’s all about basically building the intellectual property with a solid foundation.

“If the IP becomes very popular, then it can start its own life.

“Look at Upin & Ipin, it has been going strong for over 10 years. That is the same approach that we want to have for our animations.”

Norman concludes that, with the ability to adapt, KRU Corp can look forward to far better things.

Astro celebrates its 25th year with 150 titles on special channel, including poignant documentaries

Beyond K-pop: 5 South Korean stars' YouTube channels to check out