The filmmakers for the Anita Mui biopic spent three years looking for the right actress to portray the Hong Kong diva. Although production has wrapped for the movie for several months, the filmmakers remained tight-lipped on the actress they have cast to play Mui.

On Thursday (July 8), Edko Films released a second trailer and three movie posters for the movie simply titled, Anita. And the company also announced the actress who is tasked to play the legendary singer in the movie.

Though Wong has been modelling since 16, Anita is her first acting gig. Needless to say, playing such an iconic and much-loved celebrity was a mammoth task for Wong. Louise Wong (left) had to attend dance and vocal trainings for more than six months to prepare for her role as Hong Kong singer Anita Mui (right). Photos: Louise Wong/Instagram and Filepic

She had to undergo singing and dancing training for more than six months to prepare to play Mui.

"[Anita] is an example to our generation that success does not depend only on talent, hard work is equally important," Wong said in an interview.

Mui, known for her outlandish costumes and top-rate showmanship, died of cervical cancer at 40 in 2003.

She started her career in 1982 after winning the first New Talent Singing Awards in Hong Kong, beating over 3,000 contestants.

Among her memorable hits are Bad Girl, Break The Iceberg and Flaming Red Lips. Mui has also acted in over 40 movies, winning several acting accolades including Best Actress at the 1988 Golden Horse for her role in Rouge.

Bill Kong, Edko Films' producer, said in an earlier interview with Reuters: "I hoped that more people will see the film because Mui's story and her never-give-up spirit is exactly the attitude of Hong Kong people."

Anita is written and directed by Longmond Leung (Cold War, 2012). Release date has yet to be announced. The posters for 'Anita'. Photos: Handout 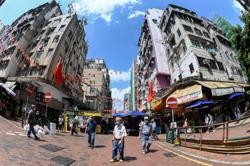