The bandmates of Twice discussed their 10th EP, 'Taste Of Love', upon its release Friday.– Photo: JYP Entertainment

The bandmates of Twice discussed their 10th EP, Taste Of Love, upon its release Friday.

It had been eight months since the band’s previous album, Eyes Wide Open.”

“This is an album that took us a long time to make and consequently, expectations for the promotion are high, ” said Jeongyeon. As many of their fans are looking forward to seeing something new, they would like to repay their fans with a range of fresh performances, she added.

The key word for the new EP is growth, according to Jihyo.

“The biggest difference would be that we’re able to talk about love with confidence, ” she went on. “It can be said that we’ve found the answer to love in this album, while we were curious about it in the fifth EP.”

They are especially proud of the fact that their names appear in the credits for the lyrics of all the songs on this EP.

“We’ve been working on writing the words every time we come out with a new album so we could take up the challenge with self-assurance, ” said Dahyun. – The Korea Herald/Asia News Network 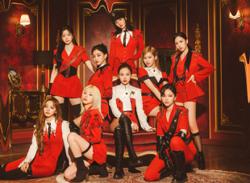