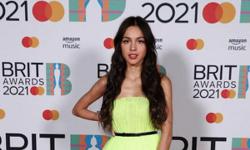 Olivia Rodrigo got her driver’s license at 17 and hasn’t taken her foot off the accelerator since.

In the whirlwind months following the record-shattering release of her viral debut track, Drivers License, the Disney actor-turned-global pop phenom has put out two more expectation-defying singles, performed live at the Brit Awards and been the subject of a Rege-Jean Page-starring Saturday Night Live sketch before appearing on the long-running sketch comedy series as one of its youngest musical guests of all time.

All that buzz and exposure has been building up to the teen songwriting machine’s highly anticipated debut album, Sour. Several hours later after the May 21 release, the reviews are in, and the consensus is overwhelming: The fresh face of Gen Z pop does not miss. And she’s here to stay.

“Hot on the heels of Drivers License, Rodrigo’s gloriously melodramatic power ballad that came out of nowhere to spend eight weeks atop Billboard’s Hot 100, Sour might be the most self-aware pop record in recent memory, ” critic Mikael Wood writes for the Los Angeles Times.

“Again and again across these 11 songs, Rodrigo measures her values and desires against those of others; she describes how her experience of a relationship differed from an ex’s and wonders why she’s not as psyched about being young as older people keep telling her she should be.”

Though it’s safe to say Rodrigo’s rising star has recently outshone her Disney beginnings, it hasn’t completely eclipsed them.

Nearly every music critic has made note of the prominent fan theory that Drivers License — and the many other heartbreak tracks Rodrigo has released since — centre on her High School Musical: The Musical: The Series co-star Joshua Bassett, who allegedly left her for an older and blonder Disney performer, Sabrina Carpenter.

“You don’t need to know anything about Rodrigo’s life — OK, Rodrigo’s lives — to enjoy the record, which uses shapely melodies and crafty textures to deliver stories about the emotional trials of late teenhood, ” he continues in his review.

“Fully appreciating Rodrigo’s skill requires paying close attention; she sings like an actor and writes like a screenwriter, which sets her apart in a post-Taylor pop scene that’s gotten quickly crowded with the whispery likes of Billie Eilish, Tate McRae and Gracie Abrams.”